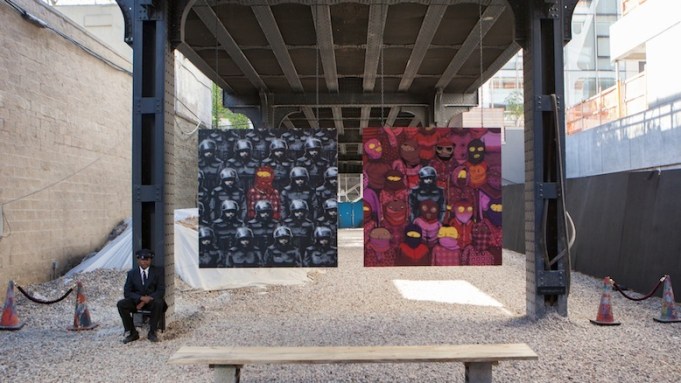 In case you hadn’t heard, British graffiti artist Banksy is in the midst of a monthlong New York “residency.” During his time in the city, he has created artworks not only in the gallery neighborhood of Chelsea (a mural with Brazilian street art duo Os Gemeos) but also in run-down areas like East New York and in relatively suburban sections of Staten Island. He set up a stand in Central Park offering Banksy originals for $60.

A Banksy social-media craze has resulted in the most trivial of occurrences being blogged. A pug urinated on a Banksy image of the Twin Towers, and New Yorkers crowded around to photograph the scene; images of the throng with their iPhones proliferated on the web.

Just what is it that makes Banksy so different, so appealing? Why has his New York residency created such a media conflagration? A.i.A. asked for a few specialists’ opinions.

“He has worked the anonymity angle better than anyone,” New York-based critic Carlo McCormick told A.i.A. by phone this week. And that’s to his advantage, said McCormick: “When you’re a middle-aged putz, it’s better to let people imagine what you look like. Let’s just say he’s not a kid.”

McCormick compared Banksy’s synthesis of American street art to that of American forms of music by bands like the Rolling Stones.

“The Brits have always been great at taking vernacular aspects of American culture, like rock ‘n’ roll and the blues, and then repackaging them for Americans in an appealing way,” he said.

Though he’s a fan, McCormick doesn’t give Banksy’s efforts in Gotham his highest praise.

“His New York pieces have mostly been funny one-liners, but I hold him to a higher standard,” he said. “The best one, to my taste, has been the Central Park one, where he was selling original Banksys for $60. That’s institutional critique. That’s the one that has currency in our art world.”

“We went from a president who wanted to wage war to one who wants to zap people from the sky and spy on everyone. But for whatever reason Banksy hasn’t brought his political work to New York.”

“Banksy’s street pieces have an ephemerality that tugs its forelock to Conceptual art in that it goes away,” Hickey told A.i.A. when reached by phone. “But I know about a thousand better taggers whose work lasts about as long as Banksy’s does.”

“I guess his popularity results from the fact that he doesn’t seem like a street artist who’s gone legit, but rather a legit artist who’s gone street,” Hickey said. “But it’s all kind of vanilla to me. Is there something happening there [in New York] that I don’t know about other than a vacuum of good art?”

Despite his doubts, Hickey acknowledged that Banksy’s work isn’t the worst thing out there. “I think it’s more interesting than Marina Abramovic. I’ll give it that.”

Banksy’s most devoted followers, McCormick said, are exactly those who would like to have a word with him in an interrogation room.

“The vandal squad guys are the biggest fanboys out there,” he said. “They keep track of these projects more than anyone who’s supposed to be expert in the field.”

Reached by phone on Tuesday, a representative of the NYPD’s Citywide Vandals Task Force said no one was available to comment on Banksy. Referring to 14-year-old Avonte Oquendo, he said, “We got a missing kid. Yes, you’ve reached the vandalism squad. But in these situations, it’s all hands on deck.”