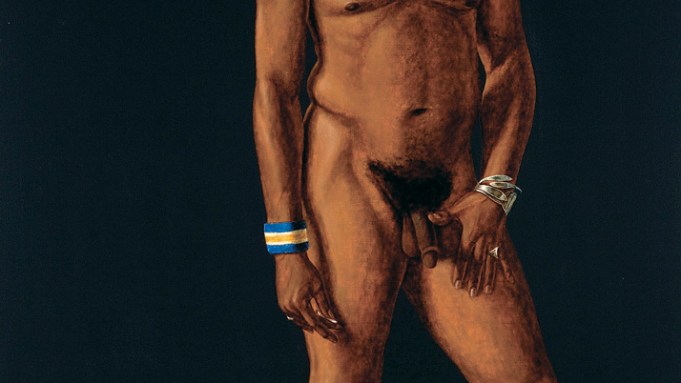 The fascination of Barkley L. Hendricks’s survey exhibition of paintings is first that it’s a window to the past, a slice of black American style from the late ’60s to the early ’80s rendered in dress (or undress), accessories, hairstyle and stance, with occasional slang in the titles. Art historically, the work also links to other times, since his typical presentation of an isolated figure on a monochrome background evokes both religious icons—especially when he uses a metal-foil surface—and works by Rembrandt and Caravaggio, to whom Hendricks admits his debt and gives his admiration. Additionally attractive is the fact that the figures are not stereotypes or symbols but portraits of the artist himself and his family, friends and students, conveyed with a striking directness and immediacy so that they almost radiate reality and knowability. Hendricks is a sophisticated practitioner who combines impressive references, forms and techniques in renderings that seem to cut to the core, to reveal his subjects as vulnerable individuals even as they self-consciously pose in displays of hipness.

Hendricks (b. 1945) is a native of North Philadelphia who trained first at the Pennsylvania Academy of the Fine Arts, once Thomas Eakins’s turf, which may have amplified his existing interest in the figure, and then at Yale, where in addition to developing his painting skills he studied photography with Walker Evans. He has been exhibiting his paintings since 1966, with solos at Kenmore and Benjamin Mangel galleries in Philadelphia, ACA and Mitchell Algus in New York and numerous museums. Moreover, he has been included in seemingly every major survey of African-American art from “Afro-American Artists, 1800-1969” at the Philadelphia Civic Center in 1969 to “Black Male: Representations of Masculinity in Contemporary American Art” at the Whitney in 1994. Although his work has influenced younger black artists such as Kehinde Wiley and Jeff Sonhouse, his name is not as familiar to the larger art world as the work in his current traveling exhibition would lead one to expect. Probably contributing to that knowledge gap is a production gap: Hendricks, busy with other activities including teaching (at Connecticut College) and photography (especially of jazz musicians), did not complete any paintings between 1984 and 2002. Yet the exhibition’s concentration on the early work (two portraits and a dozen landscapes date from the last few years) is no liability and gives the show greater coherence and impact.

“Barkley L. Hendricks: Birth of the Cool” (the title from a Miles Davis album) was organized by Trevor Schoonmaker, contemporary curator at the Nasher Museum of Art at Duke University, in Durham, N.C., where it debuted. It is the third collaboration between the two men, who met when Schoonmaker curated “The Magic City” at Brent Sikkema Gallery in New York in 2000, and again when he curated “Black President: The Art and Legacy of Fela Anikulapo-Kuti” for the New Museum in 2003. Fela (1938-1997) was a Nigerian singing star and activist whom Hendricks had met and photographed, in addition to seeing him perform and collecting his records and CDs. Hendricks, who plays the trumpet and is a jazz devotee, was inspired by the prospect of an exhibition centered on Fela to paint Fela: Amen, Amen, Amen, Amen . . ., a large oil of the singer in an orange jumpsuit, his left hand on his crotch, his right holding a microphone; a burning, thorn-wrapped heart that resembles a reversed shape of Africa is emblazoned on his chest and a halo caps his head against a background of variegated metallic leaf. In the Nasher show, the framed painting sat on an altar shelf above a jumble of 27 pairs of hand-painted high-heel shoes, representing the women in Fela’s life (singers, dancers, girlfriends). This showy piece leans more toward a poster quality than the earlier paintings do, and eschews their feeling of the real: this is a celebrity.

Compare Fela’s portrait to, for instance, Lawdy Mama (1969), which depicts a young woman from hip level up on a gold-leafed vertical canvas whose rounded top, suggesting a medieval altarpiece, conforms to her enormous Afro—bigger than Angela Davis’s, it conveys a statement of black pride. She wears a dark-striped T-shirt dress, casual yet proper, and her left arm crosses her body to grip her right elbow, a rather constrained pose. Her face is unsmiling, her expression a mix of determination and timidity. The effect of the whole is quiet yet assertive. One studies her face to know her better.

Almost without fail, Hendricks catches such sensitive indications of character in his portraits, and often with very mixed messages. His 1977 Brilliantly Endowed (Self-Portrait) presents him partly—strategically—undressed (the title, the catalogue notes, both touts and mocks a phrase from a Hilton Kramer review of his work). This is not a classical nude but a man with only the most central of his clothes off, which thus contradicts the conventions of heroic or romanticized figures. Hendricks is willing to violate his own privacy; the “undressed” quality is emphasized by the amount of personal ornament he still wears.

The painting’s tonality is Rembrandtesque, the warm brown of his flesh cast into shadows by some yellowish light source at the left; glinting highlights of his rings, bracelets, necklace and glasses frames recall the glint of metal in Northern Renaissance still lifes. His sneakers and the top of his white applejack cap are incomplete—cut off with the brusque modernity of a photograph and creating a small pulse of compression—even as their light color calls attention to them and initiates a triangular path of vision that reinforces the cropping.There are other possible symbols in this painting: the bold red and green bands on the artist’s socks likely allude to the Black Liberation flag. A toothpick in his mouth (also seen in other self-portraits) and a cigarette or a joint in his right hand (which seems like one thing too many here) declare that he is a homeboy, even if he paints like an old master. The wary look on his face may be the “working” look of an artist studying his own image in a mirror, but it can also be read as knowing or skeptical: Hendricks displays himself as a black man and a sexual being (emphasized by his left hand splayed on his thigh, with the thumb on his penis), squarely facing the ambiguous identity of a black male in American culture.

Hendricks develops color impact in various ways. In the self-portrait, the overall tone is shadowy, but he also did a series of white-on-white paintings in which dark skin color stands out graphically. Clothing and backgrounds are milky white in single or multiple-person images such as Steve (1976) and What’s Going On (1974). In an early example in the series, Dr. Kool (1973), the clothing of the uncropped but squeezed-in male figure with a dark briefcase is far more softly focused than the face and hands. A faded effect evokes a bleached photograph except that the face is distinct and realistic.

The same leaching out is seen in North Philly Niggah (William Corbett), 1975, which features a peach background and a soft-focus orangey fur-lined overcoat that blends in; the subject’s head and the visible wedge of his rose-colored shirt seem extracted from a completely different palette. He stands to the left of center, his head turned slightly to the left, emphasizing the empty expanse of canvas beside him. That same lean to the left is seen in Sweet Thang (Lynn Jenkins), 1975-76, one of the small number of portraits with a fully detailed setting. The young woman slouches in the corner of a sofa, blowing a large pink bubble; the line of her body begins with her headband and hand at the top left of the painting and continues along a green sweater and green floral skirt down a bare outstretched leg to a platform sandal that stops several inches short of the lower right corner. A strip of patterned carpet at the bottom edge and the bit of patterned wallpaper visible above the plain beige couch accentuate the emptiness of the right side of the picture, conveying a sense of potential change.

Hendricks also works with stronger monochrome backgrounds: a primary yellow, or a red so intense that it seems to reduce the figure to near silhouette, as in J.S.B. III (James Sherman Brantley), 1968. He also concentrates strong color in the figure’s attire, as in Icon for Fifi (1982), a woman in yellow satin pedal pushers on a combination leaf ground, or Sir Charles, Alias Willie Harris (1972), a man shown on a white ground in three poses, each time wearing a flaming red trench coat.

The gist of it, then, is that Hendricks tweaks his format and pushes his colors, so the portraits all have punch. One responds to color, to pose, to costume, to facial expression. The works seem intensely considered.

The exhibition focuses on the portraits, but includes a taste of other genres. Between 1967 and 1970 Hendricks painted semi-abstract images based on basketball floor markings and hoops. The show also includes two groups of small landscapes painted in Jamaica since 1999 and all in gold frames, circular, oval or lunette in shape. The unmodern and prominent frames are obstructive; they create the feeling of looking through a porthole and thwart the spatial evocation of the exquisite sea- and cloud-scapes. But in any case, the intimacy of these works—the largest about 28 inches wide—is overwhelmed by the power of the portraits, which are Hendricks’s masterworks.

“Barkley L. Hendricks: Birth of the Cool,” curated by Trevor Schoonmaker, opened at the Nasher Museum of Art at Duke University, Durham, N.C. [Feb. 7-July 13], and travels to the Studio Museum in Harlem [Nov. 12, 2008-Mar. 15, 2009], the Santa Monica Museum of Art [May 9-Aug. 15, 2009] and the Pennsylvania Academy of the Fine Arts, Philadelphia [Sept. 18-Dec. 20, 2009]. It is accompanied by a 140-page catalogue with essays by Trevor Schoonmaker, Richard J. Powell and Franklin Sirmans, as well as an interview with the artist by Thelma Golden and Hendricks’s own commentary.