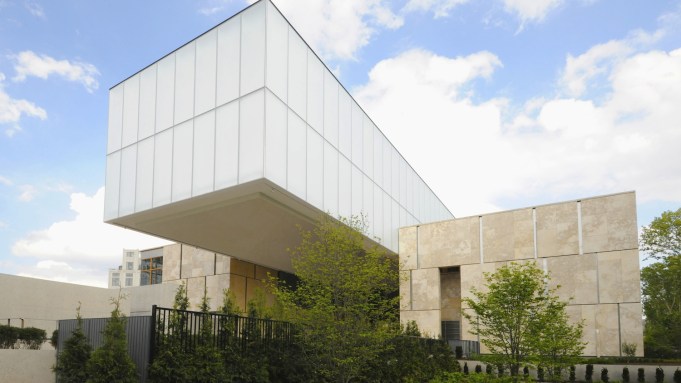 Architects Tod Williams and Billie Tsien took on an onslaught when they won the commission five years ago to design a new home in downtown Philadelphia for the renowned and beloved Barnes Foundation. Visiting the original mansion of the visionary collector Dr. Albert C. Barnes in the suburb of Merion was an intimate and singular experience for generations of viewers. After creating an educational foundation in 1922, he installed in the mansion dozens of major paintings by Cézanne, Matisse, Picasso, and Renoir alongside other modern and old masters, African art, ceramics, furniture, textiles, and ironwork. Many decried the legal petition in 2002 brought by the trustees of Barnes Foundation to amend the collector’s provision that the “paintings shall remain in exactly the places they are at the time of the death of donor.” Barnes died in 1951.

“When the court spent two years reviewing Alfred Barnes’s intentions, to divine what was critical to him, it determined that the foundation’s educational mission was paramount,” said Derek Gillman, executive director and president of the Barnes Foundation, shortly before tomorrow’s public opening of the new $150 million Barnes campus on the Benjamin Franklin Parkway. The new facility is intended to address financial problems and accessibility constraints due to Merion’s zoning restrictions that have long plagued the foundation.

“More than with a lot of other cultural institutions, people had very emotional attachments to the Barnes Foundation,” said Tsien, who was nonetheless taken aback when someone compared their participation in the project to working for Muammar Gaddafi. Williams and Tsien were given an extraordinary mandate: replicate the same sequence of Barnes’s 24 gallery rooms and reinstall every ensemble on every wall exactly as it was, while adding all the amenities the original lacked—an auditorium, temporary exhibition space, restaurant, shop—in a building that wouldn’t overwhelm the core collection.

“At first we didn’t realize that the ensembles included the hardware, the burlap on the walls, the framing devices he used, the furniture,” said Williams of Barnes’s symmetrical groupings, which highlighted relationships between paintings according to color, line, and space and were punctuated by the decorative rhythms of the iron padlocks, candlesnuffers, horseshoes, and hinges hung between works and the hand-painted chests topped with Native American pottery and andirons placed along the walls with absolute precision. “It was a total work of art. Barnes himself becomes the artist.”

The architects also found surprising freedom. With landscape architect Laurie Olin, Williams and Tsien oriented the campus around the concept of a “gallery within a garden,” as Barnes’s mansion was set in an arboretum. They have created a series of processional spaces-beautifully landscaped pathways and long, shallow reflecting pools-that draw visitors in from the hectic parkway to a serene outdoor plaza that leads into a simple L-shaped pavilion clad in a geometric tapestry of Negev limestone blocks.

Perhaps most significant is the lighting. The architects maintained the dimensions and placement of the original windows but substituted low-emission clear glass for Barnes’s frosted panes and natural wood window frames for his white-painted metal moldings.

The architects’ sensitive transposition has kept the unique and direct visual experience of the Barnes’s interior intact. And it will no longer be just for those willing to make the pilgrimage for the limited appointments in Merion.

“The Barnes Foundation of Philadelphia is at last truly accessible to the public,” said Gillman. “Not just the province of the wealthy and educated.”