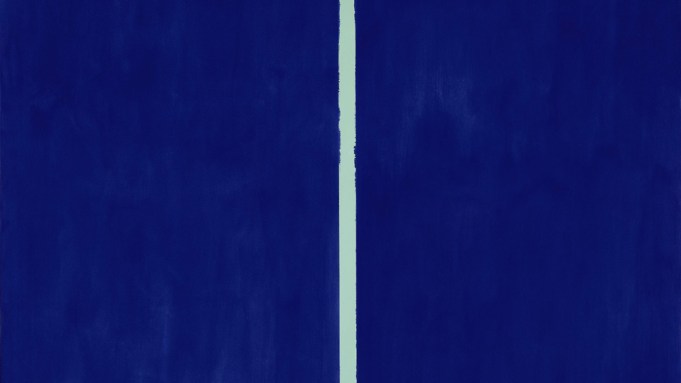 Nearly $700 million worth of postwar and contemporary art may change hands at evening auctions this week.

Multimillion-dollar works by artists such as Barnett Newman, Jean-Michel Basquiat, Jackson Pollock and Gerhard Richter go to the block during Sotheby’s, Christie’s and Phillips spring sales. The auctions followlast week’s Impressionist and modern art sales at Sotheby’s and Christie’s, which surprised many observers by bringing in a tidy $388 million on middling-quality offerings, and the second Frieze New York art fair, which ends today.

Speaking to A.i.A. by phone, New York art advisor Wendy Cromwell said, “There is a staggering amount of trophy merchandise coming through the market at one time,” and added that estimates on contemporary art seem irrationally high when compared with postwar examples. “Basquiat is an incredible painter,” she said, “but where is the rationale for these prices?”

The sales occur within days of a front-page article in Monday’s New York Times that describes the art market as the perfect place to launder money. “That will have absolutely no effect on sales,” Cromwell said. “The art world really operates according to its own rules.”

Three works, by Barnett Newman, Gerhard Richter and Francis Bacon, are tagged at $30-40 million each.

Newman’s Onement VI (1953) is featured on the cover of the seven-pound sale catalogue, which devotes no less than 22 pages to the work. At 8½ by 10 feet, the canvas is a field of deep blue with a trademark “zip,” a vertical stripe in a lighter, greenish-blue. It reportedly comes from the collection of Microsoft co-founder Paul Allen.

In the hands of the Hyatt Hotels Corporation since 1998 and on offer Tuesday is Richter’s Domplatz, Mailand(1968), a 9-by-9½-foot canvas that shows the plaza outside Milan’s Gothic cathedral. It offers a view of the Galleria Vittorio Emanuele II, a grand 19th-century shopping arcade, and the church, thus juxtaposing commerce and religion in the artist’s characteristic photo-based but immaculately blurred style.

Bacon’s Study for Portrait of P.L. (1962) depicts the artist’s lover, Peter Lacy, whose death that year ended what art historian Michael Peppiat, quoted in the sale catalogue, calls “the most exalted and the most destructive love affair [Bacon] was ever to know.” Seated before a background of green fields and blue stripes, Lacy sports a face seemingly disfigured by Bacon’s brushwork.

Christie’s sale of 72 works on May 15 is estimated to total as much as $300 million. Last May’s sale was the most lucrative contemporary art auction in history at $388.5 million.

Leading the sale is Basquiat’s Dustheads. The artist’s current record is $26.4 million, set at Christie’s in November, so Dustheads needs only to exceed its low estimate to set a new one. At 6 by 7 feet, the intensely worked painting depicts two manic-looking figures against a black ground. The current owner (reportedly London collector Tiqui Atencio) has had the work since buying it at Tony Shafrazi Gallery in 1996. “It was traumatic for her to let it go,” the auction house’s Brett Gorvy told A.i.A. at a press preview.

Jackson Pollock’s Number 19, 1948, a drip abstraction in white, black and gray, may also fetch as much as $35 million. It’s been in just three collections, and is reportedly on offer from Mitchell P. Rales, the Washington, D.C., industrialist, and his wife, Emily.

There are relative bargains to be had on works by women artists, points out New York dealer Cristin Tierney of Tierney Gardarin. “Both houses have great works by Joan Mitchell and Agnes Martin, whose works have stood the test of time,” she told A.i.A. via e-mail.

“I say look to the ladies!” Tierney advised.

Finally, on May 16, Phillips expects to ring up as much as $110 million on 38 lots, including artists ranging from Roy Lichtenstein to Christopher Wool and Yinka Shonibare. A single work by Andy Warhol may bring as much as a third of the total. The top lot is his Four Marilyns (1962), showing the actress repeated four times on a bright orange background. It’s estimated to bring $35-45 million.