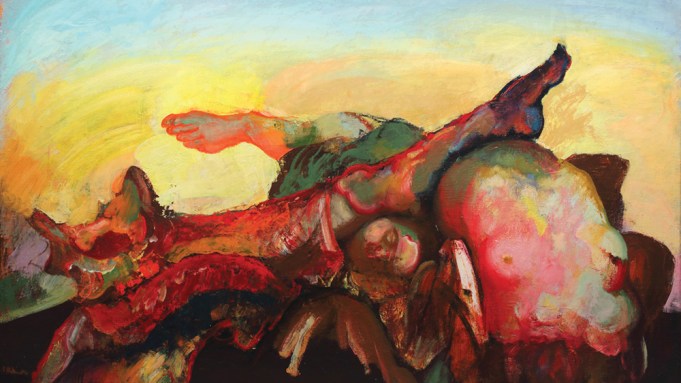 Why do some artists become canonical, while others, equally respected at the time, fade into obscurity? Once the answer was simple: Quality. But lately, that supposedly self-evident attribute has come under scrutiny. Skeptics find it to be not objective at all, but rather various and changing due to its socially determined nature. Today, feminism, multiculturalism, the global decentering of the art world, and a profound critical rethinking—one that rejects the old formalist consensus and takes into account the vagaries of patronage—are rewriting conventional art historical narratives. (And it doesn’t hurt that newly rediscovered artists offer fresh grist for an oversaturated market.)

In particular, the story of midcentury abstraction is coming up for reassessment. Figures like Lee Krasner, Carmen Herrera, Norman Lewis, and Al Loving—who were marginalized because of their race or gender—are being inserted into the canon. Figurative, political, spiritual, and social approaches to art once dismissed as reactionary by the acolytes of abstraction are getting renewed attention. Even the museums most responsible for the midcentury consensus are making room for new ideas.

This summer, the Guggenheim Museum in New York turned its collection over to six artists whose selections deliberately recontextualized both recognized and under-known artists. One of the most provocative installations was conceived by Richard Prince, who challenged the story of American triumphalism with international examples—among them Georges Mathieu, Judit Reigl, and José Guerrero—that questioned the uniqueness of Abstract Expressionism’s guiding lights. At the Museum of Modern Art in New York, which has promised a radical new hang when it reopens its doors in October, an exhibition devoted to the cultural impact of curator Lincoln Kirstein unearthed works from MoMA’s collection that reveal the museum’s early interest in performance, figuration, magic realism, queer art, and other modes at odds with its later formalist focus.

Thus the moment seems ripe for a reconsideration of the work of Hyman Bloom, an artist who has long lurked on the margins of the Abstract Expressionist saga. Bloom, a Boston-based painter active from 1945 until his death at age 96 in 2009, was deeply admired during his lifetime by critics and fellow artists. Boston painter Bernard Chaet reported that both Willem de Kooning and Jackson Pollock told him that they considered Bloom the first Abstract Expressionist.1 Bloom’s other champions included painter Elaine de Kooning, art historians Barbara Novak and Thomas Hess, and MoMA curator Dorothy Miller, who launched his career by including nine of his paintings in her influential survey of new art, “Americans 1942: 18 Artists from 9 States.” However, while the other Abstract Expressionists soared in repute, Bloom fell into obscurity. Instead of mingling with the New York School, he remained in Boston during a period when George Harold Edgell, the director the city’s premier art institution, the Museum of Fine Arts, chose to refocus its mission away from modernism. Prior to this, the museum had been deeply committed to contemporary art and to local artists. But this is only one of many reasons for Bloom’s neglect.

As a Jewish immigrant from a part of Latvia that is now in Lithuania, Bloom frequently incorporated explicitly Jewish themes. He painted rabbis, synagogues, and torahs at a moment when critics like Clement Greenberg and Harold Rosenberg were valorizing the universality of abstraction. And Bloom had a decidedly ambivalent attitude toward success. Visitors reported that he would turn his paintings to the wall prior to a studio visit, and seemed reluctant to expose them. He seldom attended his own openings. For ten years, from 1962 to 1972, he chose to subvert his growing reputation as a painter by producing drawings almost exclusively.

“Hyman Bloom: Matters of Life and Death” is curator Erica E. Hirshler’s bid to reevaluate Bloom’s art. The show, which appears at Boston’s MFA, the museum whose indifference helped dampen his career in the 1950s, is a tour de force. Hirshler has chosen to highlight some of the most difficult works in Bloom’s oeuvre. She centers the exhibition around paintings and drawings of cadavers based on Bloom’s visits to a Boston morgue and hospital autopsy room. These works gained him notoriety when they were first shown in 1946. His own dealer refused to place certain of the works in the main part of his gallery for the show, relegating them instead to a back room. Trustees of what was then called the Albright Art Gallery, in Buffalo, removed the paintings from his 1955 retrospective.

Even today it’s easy to understand why some viewers might have been repelled. While lush expressionistic brushstrokes somewhat obscure the grisly details of putrifying flesh, disemboweled torsos, and bones protruding from masses of muscle peeled back, these works retain their ability to shock. But at the same time, they are undeniably beautiful. Bloom himself voiced surprise at the negative reactions to these works, noting that his intention was to unify “the harrowing and the beautiful.”2 And indeed the works are full of both. The Hull (1952), for instance, presents a supine cadaver whose rib cage has been extracted from the surrounding muscle by a pair of hands wielding a surgical knife. The cadaver’s head lolls off to the side, almost invisible at first glance. Instead, the focus is on the ribs that rise up, as the title suggests, like the frame of a ship’s hull. As with many of these paintings, the palette is a rich blend of reds, yellows, oranges, and deep blacks—with occasional highlights of blue. One could easily get lost in the abstracted play of color and light. But equally arresting are the art historical echoes. The expository position of the surgeon’s hands brings to mind Rembrandt’s Anatomy Lesson. The saturated shades of crimson and amber evoke Soutine’s paintings of animal carcasses. Also lurking somewhere is Mantegna’s Dead Christ and Titian’s Flaying of Marsyas. More indirectly, the upward thrust of the ribs as they pull away from the ashen head recalls the sweep from death to life in the figural composition of Gericault’s Raft of the Medusa. There is a connection to Francis Bacon’s twisting carcasses and distorted bodies as well, a resemblance acknowledged by Bloom’s contemporaries when the two artists were paired in a 1960 exhibition at the Art Galleries of the University of California, Los Angeles.

Other works present full bodies pictured from above on a table as if from the anatomist’s eye view. One of the most startling of these is Corpse of Man (1944), in which the partially eviscerated cadaver seems to be standing upright with his genitals still intact and his powerful body poised with shoulders back like a prize fighter. There are also numerous depictions of severed limbs. A Leg (1945) features a rotting, ulcerated leg imbued with an almost jewel-like radiance. While Bloom’s subject here is death, these cadavers never devolve into mere meat. Even the 1953 Slaughtered Animal, a painting of a beef carcass particularly evocative of Soutine, includes a partially severed head whose bulging eye seems to be directly addressing the viewer. In all these works, the roiling surfaces and dynamic brushwork belie the finality of death.

The cadaver paintings are supplemented by a number of related works. These include several still lifes of turban squashes that quiver with the same life as the extracted viscera, two oddly sepulchral brides, and a remarkable painting titled The Harpies (1947) in which a swirling mass of red and black eventually resolves into a depiction of birdlike creatures tearing a corpse apart. Hirshler has also included several paintings based on plans of ancient ruins from archaeological publications. These are among the most abstract of Bloom’s works, full of glittering shapes in which he draws a line from the excavation of the earth to the excavation of the body.

Along with the paintings, the exhibition includes a number of large-scale drawings that attest to Bloom’s skill as a draftsman. Several early drawings of the torquing figures of boxers and athletes bring to mind not only Michelangelo, but also such contemporaneous artists as Paul Cadmus, Jared French, and Pavel Tchelitchew. Drawings in red crayon offer alternate versions of some of the paintings, often with a somewhat more literal representation of sliced flesh. In this context, two gorgeous drawings of the entwined branches and roots of primeval trees suggest parallels between corporeal and botanical forms. These were inspired by Bloom’s experience in the woods of Lubec, Maine. They date from the period in the 1960s when he set painting aside to concentrate on drawing. The delicacy of the lines recall Dürer’s etchings, while the movement of the leafless shoots seems to be another statement about life in death.

The cadaver theme has a long pedigree, going back to the medieval tradition of memento mori and Renaissance anatomical studies. Greenberg and Hilton Kramer, among others, interpreted Bloom’s cadaver paintings as references to the Holocaust. Bloom denied that, instead describing these works as a search for “a door into what is beyond.”3 In the 2019 multiauthored book Modern Mystic: The Art of Hyman Bloom, art historian Marcia Brennan places the cadaver works in the context of Bloom’s lifelong interest in “ritual boundary crossings.” This is suggested by paintings inspired by séances as well as drawings meant to depict the astral plane, that zone between life and death that is the focus of many esoteric religions.4 Bloom had a well-documented interest in mysticism, kabbalistic themes, and the continuity of life and death. He was an active member of the Boston Theosophical Society and the Vedanta Society. He also experimented with LSD in an effort to transcend the limitations of the material world. His preoccupation with the abstracted beauty of the putrefying corpse is of a piece with his immersion in the physicality of thick gestural strokes of paint. Both submerge one so completely in the world of matter that ordinary reality seems to disappear. What remains is something ineffable—a glimpse of the realm of spirit. In the cadaver paintings, form and subject matter combine to demonstrate his belief in “metamorphosis as the nature of being.”5

Ten years after his death, this may be Hyman Bloom’s moment. Along with the MFA show and Modern Mystic, an exhibition of his paintings at Alexandre Gallery in New York, on view through Oct. 26, confirms the continuing power of his themes: the vulnerability of flesh, the exploration of the spiritual through art, and the conviction that change is the essence of reality. Bloom’s reemergence coincides with the reassessment of other artists—Morris Graves, Hilma af Klint, Carol Rama, and Grant Wood—associated with spiritual and figurative traditions spurned by mid-twentieth-century critics. Bloom’s achievement is further proof of the inadequacy of the established canon. And it raises the question—how many other Hyman Blooms are out there awaiting rediscovery by art history?

Many Wealthy American Homebuyers Are Moving Overseas. Here’s Why.