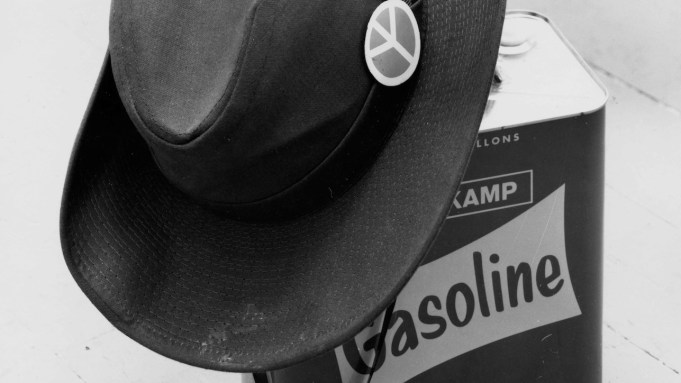 Travis Jeppesen is a writer living in Berlin. His novel The Suiciders was published by Semiotext(e) in September. Here, he recalls his favorite shows in Berlin from the last year.

“The Whole Earth: California and the Disappearance of the Outside” at Haus der Kulturen der Welt
We all know that California is really its own country, but how many of us are aware that, for a moment at least, the Golden State once served as the container for the entire planet?

Wolfgang Tillmans at Daniel Buchholz
I never much cared for Tillmans’s figurative work, but when he turns towards abstraction, magic often happens, as this show proves: total surface; the depth of flatness. Smudgology.

Luther Price at Circus
I’m not saying I’m easy or anything, but I was already seduced by the impeccably timed clicks of the slide projectors before I even walked into the main galleries, where my brain began its scramble to make some narrative sense of all these grotty projected bits before ultimately giving in to the fleshy objectity of the whole. Fragments of wall, fragments of body: stains, emotions. (Emotions’re meat, too.)

Martha Jungwirth at Cinzia Friedlaender
Over at Cinzia’s joint, Martha Jungwirth gave us the splatter that matters. It is still mattering all over my brain several months after the fact. Divine poetess of color and mess, she makes faces emerge ghostlike in the canvas spillage.

Isa Genzken at neugerriemschneider
Berlin has long been my favorite beach resort. Every summer, I love nothing more than to paint my skin mannequin-silver and terrorize the locals by parading my shapeless shiftless form through the streets clothed in bikini fur and the cheapest plastic sunglasses. When it gets too hot – and it often does! – I steal an umbrella from McDonald’s to shade me as I lay like a blanket over a pile of trash, eternal drunken collaborator in my nomad song.

Winston Chmielinski at Egbert Baqué
With his candid accounting from that spot where glamour and ontology collide, Mr. Chmielinski’s move to Berlin this year has altered the stratospherics of painting in our dear city and enabled us to breathe anew.

Despina Stokou at Krobath
A good Berliner, Despina Stokou understands trash just as well as the heroic Genzken, and here managed to articulate her own take on the city’s uglified surfaces. Her paintings look just like the wall of one of the toilet stalls in that club where you snorted a line of bad speed and had really clumsy sex with that Canadian tourist with the plucked eyebrows . . . or something. Paintings that could only be made in a city that’s no fashion and all style.