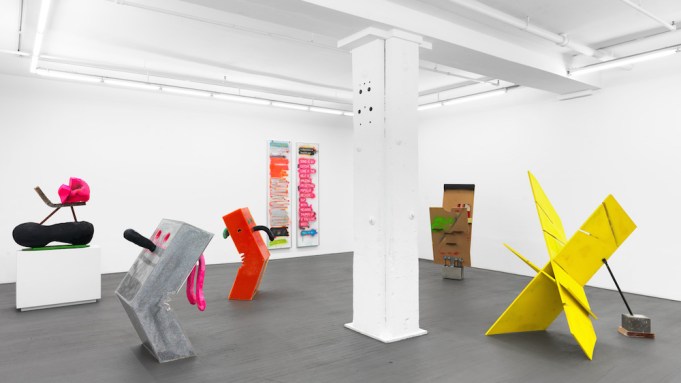 Lanka Tattersall is assistant curator at the Museum of Contemporary Art, Los Angeles (MOCA). She is currently organizing the exhibition “Hito Steyerl: Factory of the Sun,” which will open at MOCA in February 2016.

In chronological order, she shares highlights from the year in exhibitions and performances in LA.

“Apparitions: Frottages and Rubbings from 1860 to Now,” at the Hammer Museum

An exhibition focused on a single artistic technique could have been a dusty affair. Instead this show, of about 100 works by about 50 artists, captivatingly mined the myriad valences of the practice of making rubbings on paper (when adopted by the Surrealists, termed frottage), and teased out the method’s metaphorical, historical, material and sensual implications.

On a warm evening in April, Harry Dodge opened his studio in advance of shipping a group of works for his exhibition “The Cybernetic Fold” at the gallery Wallspace in New York. Jubilantly stuffed into the small studio were the artist’s newest sculptures, drawings and a video, each seemingly more polymorphously, gleefully perverse than the next. Brightly colored, glossy rectangular pieces, nearly human-scale, bent and swayed with protuberances that could be read as any number of bodily appendages, while other works appeared like improvised prosthetics tasked with holding up extremely precarious constructions. Tying it all together was Dodge’s rapid-fire monologue on the video screen, in which descriptions of particle physics and ergonomic desk furniture became wildly commingled with ideas of desire.

After parking in a lot between the Los Angeles River and set of train tracks, the audience for evereachmore was driven down a dusty road, where a gathering of dancers moved slowly together by a (surprisingly lush) section of the river. The members of the temporary dance company WXPT (which stands for “We are the Paper, We are the Trees”), founded by taisha paggett, shared a sensibility around what it means to be a person of color, queer and keenly responsive to the recent history of violence against “bodies on the margins.” What followed was an exquisite, poignant collective migration of both dancers and audience, from the river back up to a plot of land near the tracks. Improvisation has rarely seemed so urgent.

Connors makes paintings in which the juxtapositions of color are nearly good enough to eat. This was evident everywhere in his modest but toothsome solo exhibition that included medium-scale easel paintings, primarily featuring a slightly off-kilter central grid format. The shift of the grid generated a host of corporeal and libidinal associations (the dynamics between top and bottom chief among them). The type of pleasure to be had by looking at a rigorous Mondrian was met by the (pseudo-)guilty pleasure of visually diving into a color like hot pink, or an imperfectly painted rectangle.

Breiding’s meditation on the broad horizon of what it means to be a queer family opened on the heels of the Supreme Court’s ruling that same-sex marriage is a national legal right in the United States. The timing of this immersive, contemplative exhibition could not have been more apt. Taking the motif of the horizon as a point of departure, Breiding juxtaposed 16mm films of the sea’s horizon in the crepuscular hours with a multi-channel video of queer artists and activists seated at tables in their homes while they reflected on the complex question of how families, especially non-normative ones, might exist in the present. Breiding’s rhyming of the intangible perspectival view of the sea with the edge of the speakers’ tables, and the shifting positions of the videos’ participants between speakers and listeners suggested notions of “family” that are fluid and built through continual redefinition.

Tala Madani, “Smiley has no nose,” at David Kordansky

Madani’s brutal, brilliant first solo exhibition in Los Angeles was filled with paintings in which men do unbelievably cruel and sometimes unbearably funny things, to themselves and to each other. Madani painted a host of surreal and outlandish figures: some with full heads of fair hair and oversized penises, others with dark beards, bald heads, thick eyebrows and embarrassingly tiny underpants. Madani unflinchingly pushed the global hot buttons of caricature and stereotype. Her subjects, who are largely middle-aged, male and alternately sadistic or infantile, are all rendered with a keen sense of painting’s peculiar, productive ability to open up an unresolvable can of worms around representation, color, voyeurism and power—not least the power of a young, female, Iranian-born painter (Madani herself) to reveal patriarchal culture’s blind spots.

Adam Linder, Choreographic Service No. 3: Some Riding (in “This Sentence” by Public Fiction, at China Art Objects Galleries)

In Some Riding, which premiered during a smart group exhibition that explored relationships between choreography and language broadly, Linder and the dancer Frances Chiaverini recited memorized texts while performing an agile, distilled interpretation of “popping”—a form of punctuated movement that was popularized on “Soul Train.” While their bodies dissected the dynamics of choreographic movement that shifted between soulful and robotic, their words reflected upon what it means to be a performer within the art market and within capitalism more broadly. The performances’ cycling between contraction and release suggested that there are no easy resolutions to the paradoxes of creative labor, and that a critical yet caring approach to the spectacle of bodies at work may be one way to preserve creative autonomy.

The first work encountered in Donnelly’s solo exhibition was a video projected on the gallery wall directly across from the front entrance, which vanished in the sunlight the instant a visitor opened the door. This disappearing act—whimsical, strange, seemingly simply in its construction but also resisting easy explanation—characterized Donnelly’s entire installation of videos, drawings and photographs, as well as ephemeral elements, such as a slightly lowered temperature in the gallery. Apprehended together, the exhibition managed to be both cool and sentimental, hard-edged and incredibly pliant all at the same time. Most bewitching was a section of the ceiling which, on first glance, appeared to be a projection of a sublime, swiftly moving cloudy gray sky (an anomaly in the nearly endless sunshine of Los Angeles). In fact, it was simply a dark tarp humbly fluttering on top of a skylight in the otherwise darkened gallery. The vertigo of Donnelly’s reversals reverberated with me for a long time after I returned to the sunlight.

Toward the end of this deeply engrossing exhibition (which was organized by LACMA and first shown at Venice’s Museo Correr) hangs Christian Schad’s puzzling, mesmerizing painting Agosto, der Flüglemensch, und Rasha, die schwarze Taube (Agosto, “The Winged One,” and Rasha, “The Black Dove”), 1929, in which a Caucasian man with a deeply concave chest, torso exposed and in an imposing chair, sits above a wide-eyed, brown-skinned woman. Painted with an impression of exacting realism, both figures face out towards the viewer with inscrutable expressions. The relationship between these sitters and the painter, and to the viewers who might have first looked upon this work in 1929, is uneasy, to be sure. However, the expected power dynamics of race, exoticism and gender are slightly tilted from the expected axes in this painting in ways that make it unforgettable. This askance position could be found scattered throughout the exhibition, in works made as artists contended with the tumultuous (and at times euphoric) climate in Germany in the 1920s and ‘30s. The desire for empowered visual representation expressed in these works felt unsettlingly familiar, given the current rise in unabashed xenophobia.

The modestly scaled sculptures on the walls of this electrifying exhibition appeared to me like talismans for our emergency times: crafted in a a size that’s ready to travel, deploying color as a form of sustenance and texture as a means of communication, skeptical about magic but nevertheless ready to borrow from the totemic. In the works in this show, which spans more than 40 years of his career, Outterbridge has assembled and transformed resonant found objects in ways push at the long shadow of American history and insist on the crucial presence of understated, handwrought gestures.