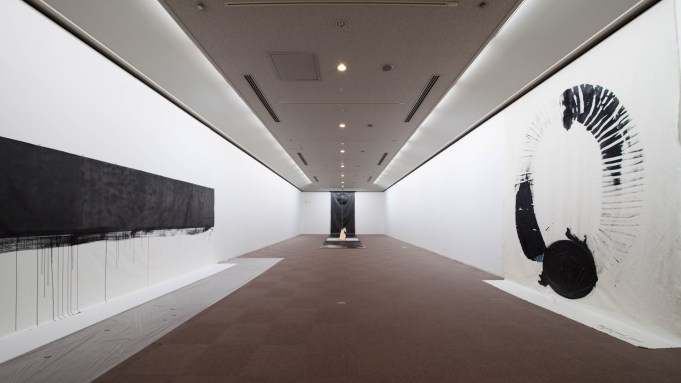 Reiko Tomii is a New York-based independent scholar and co-director of PoNJA-GenKon, an academic list serve on the topic of postwar Japanese art. She spoke with A.i.A. about the best exhibitions in Japan in 2015.

“Re: play” is the restaging of “Expression in Film,” a legendary exhibition held in Kyoto in 1972 featuring 16 Japanese artists working experimentally in film, video and photography. The curator re-created this exhibition as accurately as possible, in collaboration with all the artists. While expanded cinema and video art were explored worldwide, these artists—primarily trained in painting and sculpture—ventured into experimenting with moving images, devising Conceptualist strategies. The exhibition also uncovered a history of contemporary art exhibitions in Kyoto through detailed archival research. One of the most experimental works is by the artist Hikosaka Naoyoshi, who looped a nine-minute 16mm film that captured the surface of sea between two projectors in such a way that the film traveled across the floor (instead of being reeled and stretched between the projectors). The scars and dirt that the film collected along the way became part of the projected images.

This single-artist collection display (25 museum holdings plus one loan) constituted a major event in the study of the 20th-century painter known for his realistic tour-de-force “war record paintings.” The taboo nature of Japan’s war record paintings, by Fujita or others, can be inferred by the fact that they were confiscated by the American occupation forces after World War II and returned to Japan only as “permanent loans,” and thereafter infrequently shown. Although more light has been shed on these works in the recent years, this is the first time that MOMAT showed all the war record paintings it has by Fujita, the master of the vexing genre.

“Exhibition celebrating the completed restoration of Fujita’s works,” at the University Art Museum, Tokyo University of the Arts

The problematic master of war record painting occupies another important place, as the first internationally recognized Japanese-born painter. An integral part of the Paris School, Fujita was known in the 1920s for his female nudes with an exquisite milky, plaster-like skin. He invented a secret recipe for creating this surface, but preservation and conservation of these works posed an issue. The museum of his alma mater (Tokyo University of the Arts) took on an ambitious project to restore one of his 1920s canvases to a pristine condition through a scientific analysis of his technique. It’s amazing to see the milky surface up close as well as his signature use of very fine and long brushes called mensofude, traditionally used for drawing brows and noses. The museum also displayed the archival material it had received from his estate to illustrate his years in Paris.

Takamatsu JirÅ, at the National Museum of Art, Osaka

Takamatsu (1936-1998) was a member of Hi Red Center, an Anti-Art (Han-geijutsu) collective in the ‘60s, who went on to become a leading contemporary artist in Japan. He’s a versatile artist who worked in Conceptualism, Mono-ha, photography and painting. This retrospective, titled “Trajectory of Work,” illuminated the organic evolution of his practice from the early ‘60s until his death. The exhibition presented each series, like “Point,” “Shadow,” “Perspective” and “Oneness,” with a careful and detailed examination of his drawings and studies. The exhibition also shed light on his graphic practices through his book designs, magazine illustrations and children’s picture books.

Arts Maebashi is a new museum north of Tokyo. Part of their agenda is to highlight local artists who work very closely with the community. This exhibition, “Living Locally,” considers what it calls “critical regionalism”—consisting of socially engaged art projects. For example, Teruya Yuken, who is known for creating intricate paper cuttings from McDonalds bags, encountered the Fukushima earthquake while being an artist-in-residence at the museum before it opened to the public. In response Teruya created a permanent work that used the emergency staircase. As a public institution, the museum space is used as an evacuation area. So he created a sanctuary in which people can share the moment of crisis.

Often, this type of socially engaged art in Japan features a very personal take on community and society. A good example is the work of the novelist and artist Kobayashi Erika. Rather than making art precisely about community, Kobayashi created a bilingual poster that tells the story of her family’s matriarchs. It starts with the tsunami in 1896, which her great-grandmother experienced as a three-year-old child-the same year the X-ray was discovered. In an intricate yet private story, she combined earthquake experiences and nuclear physics (for which Marie Curie stands in as her heroine), without mentioning the obvious word: “Fukushima.”

Creating a personal take on history is also a strategy Ozawa Tsuyoshi effectively deployed for his new body of work. An artist from the same generation as Murakami Takashi, Ozawa is far more conceptually oriented than the Superflat practitioner, as demonstrated by his “Soy Sauce Museum” (an entire re-creation of Western and Japanese painting history through the medium of soy sauce) and his collaborative “Vegetable Weapons” series. “The Return of Painter F” is about Fujita, but it’s a fictional picture story. Instead of going to Paris, Ozawa’s “Painter F” stayed in Indonesia, and then came back to Japan during wartime to paint war record paintings with fervor. Ozawa collaborated with Indonesian artists to depict the life of this Painter F in an ensemble of works.

Ozawa picked Indonesia because during the war, when Japan occupied many Asian countries, they created local culture centers in Indonesia to provide art education. Ozawa worked with two Indonesian painters (who painted large-scale canvases based on his drawings), an Indonesian art historian and two Indonesian musicians (who appeared in a video narrating Painter F’s story).

In the first week of December, when I was in Tokyo, these three Fujita exhibitions overlapped. It is stunning to find the source of Ozawa’s “body-building Fujita” in a Parisian studio photo shown at the University Museum’s archival display, while reflecting on the eventful life of the painter who left his homeland and settled in Paris after creating those macabre battle scenes shown at MOMAT.

Matsutani Takesada is a second-generation Gutai artist who has upheld the command of the movement’s leader, Yoshihara JirÅ: “Make something that has never been made before” (which Yoshihara had learned from Fujita in his youth). Matsutani earned Yoshihara’s recognition through his signature technique of bubbles and bulges, which he created by pouring and hardening vinyl glue on canvas. After his move to Paris in 1966, he continued to experiment with material, adding to his arsenal graphite pencil and sumi ink, with which he created phenomenal large-scale works in which fluidity and intensity coexist, as this retrospective amply demonstrated.