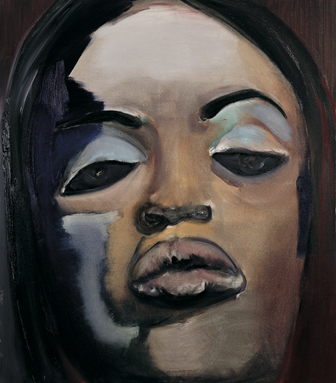 Ralph Rugoff is director of the Hayward Gallery in London. He recently curated the 13th Lyon Biennale, on view through Jan. 3, and is currently organizing a group show featuring video work that centers on the idea of performance, which will open at the Hayward next fall.

Rugoff spoke with A.i.A. to share his top picks from the year in exhibitions and performances in London.

Marlene Dumas, “The Image as Burden,” at Tate Modern

This was a traveling survey that came to London after showing at the Stedelijk Museum in Amsterdam and the Fondation Beyeler in Basel. I saw the show at all three venues. It looked the best at the Beyeler, but it was a good show in London. It included three decades of South African artist Marlene Dumas’s paintings, which become more and more nuanced as she develops, but from the very beginning they are incredibly striking. She established a way of painting and a voice that allowed her to imbue photographic images with a very different kind of information than you get in the source photograph, making them more open to interpretation, much more physically compelling. She comes from an expressionistic background in painting but deals with events with the emotional tenor of the world today, from Osama bin Laden to Phil Spector, from Naomi Campbell to sex workers in Amsterdam. It was a great show about sex, death and the human face.

Although very different, another painting show that really struck me was by another African artist—this time from Kenya—named Michael Armitage, who had his first solo show in London at White Cube. Armitage probably has people like Chris Ofili and Peter Doig in his rearview mirror, rather than Dumas. But like Dumas, he’s often working from photographs and depicting the aftermath of violence, and in some cases the actual acts of violence, such as an image of a terrorist in a shopping mall, a break-in at a house or a woman being molested by a group of men. They are painted on bark in pastels. At first glance, because they are rather beautifully painted and composed, the paintings look decorative. There is a slow-burning fuse before you start to catch on to the subject matter. Armitage is a young painter who shows an enormous potential for progress based on this show.

“June: A Painting Show” at Sadie Coles was the best example of galleries taking adventurous steps with their summer programming. There were about 14 artists from all different parts of the world. Approximately one-third of them were born before 1930 and the rest were born in the ’70s and ’80s. All of them deal with the human form but also how that form is recycled, using elements of different historical representations of the body. Highlights for me included painting by Sylvia Sleigh, a Welsh-born painter from the ’70s whose work I didn’t know; Jonathan Gardner, a younger Chicago artist; and a 90-year-old from the Netherlands named Co Westerik. In terms of looking at the wide range of figurative painting today, and what is influencing that practice, this was one of the best shows I’ve seen.

Installed in a huge museumlike room, Yto Barrada’s show at Pace looked at paleontology and natural history in Morocco, and museology in general—ideas of authenticity and how objects represent a kind of national patrimony. Apparently, an area beyond the Atlas Mountains has become a gold rush for dinosaur professionals like archeologists, fake fossil makers, rock shop operators and people from auction houses. The floors of the gallery were covered with brightly colored Berber carpets and drawers and vitrines were filled with different kinds of artifacts, even educational aids. A major piece was a realistically painted scale model dinosaur stored in shipping crates. Yto purchased the model, deaccessioned by a natural history museum in Australia, at a gem and mineral show in Tucson. The dinosaur trade, both its fakes and real objects, feels like part of show business rather than natural history. It was a brilliant exploration of the impulses behind collecting.

Sound artist Susan Philipsz installed instruments that had been damaged in wars of different kinds over the last 200 years throughout the length of the Tate’s Duveen galleries. The installation was very sparse and very meditative, with 14 loudspeakers mounted on the walls. Musicians were hired to play “The Last Post,” a melancholy song usually done on a bugle, with these instruments, which hadn’t been touched for decades; their owners might have died. The very mournful, plaintive foghornlike sounds gave a sense of the frail body of the instrument but also, by extension, of human beings and our vulnerability in war. This piece was part of a commissioning series for the 100th anniversary of the First World War. In terms of works that can somehow commemorate war, it was a very powerful piece, perhaps the artist’s best.

This show of Italian artist Fabio Mauri, who died in 2009, gets my nod for most contrary Christmas programming of the year. Part of the exhibition is an unbelievable installation consisting of a U-shaped table with 29 wax figures all dressed as Italian fascists sitting around Mussolini. The work, called Oscuramento (Darkening), is from 1975, but it’s based on an event from 1943: the convening of a council who decided to depose the dictator. Some of the individuals here are based on historical figures, some are not, but the faces are incredibly well done. Each is extremely different, all completely believable. Their presence around this table, especially around the holiday season, calls to mind The Last Supper. The piece is another invocation of world wars—a completely different approach than Philipsz’s, but also very powerful.

There were two great shows by people who I think of as multimedia masters. One was by Christian Marclay at White Cube that was later shown at Paula Cooper in New York, where it was called “Surround Sounds.” The pièce de résistance was a four-screen video installation with very images based around comic strip onomatopoeias. There was no sound, but the words moved in dazzling patterns around the walls, in ways that made the walls suddenly seem to be moving. It was very unsettling. The images behaved like the definition of the word. If the word was “CRACK,” then this word would crack open. If it was “BAM” then it would bounce into something. It was extremely playful and visually stunning. Christian is fascinated with sound, but this show was all about the representation of sound through image, color and movement.

The other multimedia master I think of is Susan Hiller, an American artist who has lived here in London since the early ’60s. She was trained as an anthropologist and is often exploring things that are on the edges of our culture, the edges of what is acceptable. One fantastic piece is a wall of images of people surrounded by images of their auras. For another she collected almost 500 postcards showing stormy seas crashing on the British coast. When you see them all together, they are nostalgic, comic and sublime. There was a marvelous video that compiled images of children performing telekinetic feats. Hiller also presented the work of an outsider artist who spent his life making drawings with strands of hair that he would split with a razor blade. The show displayed an incredible span of strange and uncanny culture that Susan’s been exploring in her work in very different ways for over 40 years.

Nástio Mosquito’s performance The Age I Don’t Remember, at the Institute of Contemporary Arts

The Age I Don’t Remember was a one-night performance commissioned by the EMDASH Foundation at the ICA by an Angolan artist named Nástio Mosquito. It was an amazing evening in which several jazz musicians located in different parts of the room, which had four stages, accompanied him. Mosquito would prance from one stage to the other, performing everything from stand-up comedy to preacher-style exaltations to beautiful singing. Mosquito is a performance artist with the voice of a popstar! The event was like channel surfing in real time and real space. Mosquito would go from talking about personal problems and bad breath and past loves to talking about apocalyptic prophesies. There was a sense of trying to grasp everything in one performance and not caring if things cohered or not. Even his musicians were cracking jokes throughout. It had this improvisational feeling that was very multilayered, and very much alive.

This year’s British Art Show, which happens every five years, was in Leeds. It’s a show that surveys what’s happening in Britain, usually with a focus on younger artists. Usually you see certain artists whose work is hitting its stride. This edition, curated by Whitechapel’s Lydia Yee and Anna Colin of Paris’s Fondation Galeries Lafayette, had standout works by the most interesting artists in London, including Anthea Hamilton, Lynette Yiadom-Boakye, Alan Kane and Mikhail Karikis, who had an incredible video in it. Also included was Linder, an artist who started making collages in the ’60s and has recently had a resurgence in her career. She had a piece that was a tapestry used as set dressing in a ballet.

—As told to Julia Wolkoff

Amber Ruffin on Racism, Comedy and the Joy of Enduring

Save $50 On Amazon’s Kindle Paperwhite