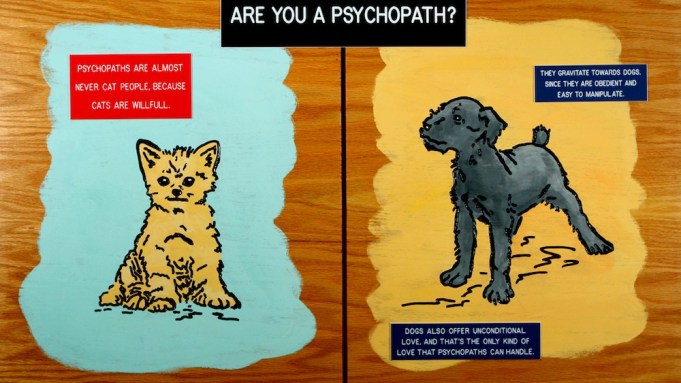 Nobody walks anywhere in Houston. But the urban sprawl, traffic jams and punishing sunshine lent an opportune context for a Christie Blizard walking/painting performance on Saturday that was part of the current Texas Biennial (through Nov. 9). With the temperature nearing 90 degrees, Blizard sweated across 17 miles of central Houston’s streets for seven hours with a canvas strapped to her back. While walking, she created blind abstract paintings with spray paint by reaching backward, and documented the journey with an iPhone taped to a wooden rig, also attached to her back. If action painting is dying for a raison d’être, Blizard injected the genre with new narrative possibilities.

Like abstract painting, the Texas Biennial is in a period of introspection, played out on a public stage. The exhibition’s organizers, including director Shea Little and curator-at-large Virginia Rutledge, are constantly asking-on panel discussions and in fundraising ventures-not only why they need to organize a regional competition of contemporary art, but also how it ought to be done. Founded in Austin in 2005 by a handful of artists associated with the nonprofit gallery Big Medium, the Texas Biennial is now the longest running state biennial in the U.S., and this year’s presentation has expanded into San Antonio, Houston and Dallas, beyond the Austin epicenter (which has the smallest art scene of the four cities).

Contemporary Texan art is faced with overcoming a spectrum of stereotypes, from George W. Bush’s Sunday paintings to Marfa’s minimalist utopia. New York- and Austin-based Rutledge realizes that if the Texas Biennial is going to succeed on a national level, it needs to promote banner artists like San Antonio-based Blizard, who has been in the 2009 and 2011 biennials; Blizard is now featured in the four-person show at Houston’s Lawndale Art Center (through Sept. 28), which is itself a powerhouse of championing local artists but is under known on the national stage. Susi Brister’s photographs of camouflaged bodies in the Texan landscape provide a vibrant counterpoint to Blizard’s urban adventures.

“Great art is made everywhere in the United States,” said Rutledge at the Big Medium opening reception; but great art needs a great platform. Rutledge is an art advisor and attorney specializing in art, copyright and nonprofits; this is the second Texas Biennial that she has volunteered to oversee. “Texas is a brand,” she said at the panel discussion “Why a Texas Biennial?” Sept. 7 at the Glassell Studio School of the Museum of Fine Arts, Houston, “and that’s something to be cautious about.” She continued, “It’s very difficult to see contemporary art in Austin, where a lot of it is being made,” because “visual art doesn’t get the same kind of attention from the city that music does.”

At Big Medium, the group show “New and Greatest Hits: Texas Biennial 2005-2011,” (through Sept. 28) serves to clarify the biennial’s short history. On display is an inlaid mirrored igloo sculpture by Linda Pace, a San Antonio-based sculptor and philanthropist who died in 2007 but whose Artpace residency and exhibition program continues to nourish the local art community while maintaining an international presence. And participating museums, such as the San Antonio Museum of Art (SAMA), made a push to exhibit their best works by Texan artists. SAMA curator David S. Rubin is unafraid to show politically charged work in his museum, including on the topics of homosexuality, immigration, addiction, war and local crime. “We love to support the real thing,” he said during a tour of the galleries.

“Buy it or lose it,” said Rutledge during her remarks at the biennial’s opening reception at San Antonio’s Blue Star Contemporary Art Museum. Rutledge is an impassioned advocate of the Texas cause, and has made fundraising a cornerstone of her tenure. The state has an unusually strong philanthropic base, and Rutledge is especially good at rallying supporters and forging connections with private patrons such as Suzanne Deal Booth, who underwrote James Turrell’s Skyspace Twilight Epiphany (2007) at Houston’s Rice University.

The centerpiece of the Texas Biennial is a statewide open call for art, which attracted thousands of entries juried by 13 curators and which culminated in a group show at Blue Star of 70 artists and collectives. Gary Sweeney, who studied with James Turrell in California, was the popular favorite, showing a 2012 routed wood, paint and signage artwork titled Are You a Psychopath?, which suggests that psychos are dog people, not cat people. The HIXX Collective (Rachel Crist and Daedalus Hoffman) exhibited a video from an endurance performance in which Crist chewed and spat tobacco for three hours. It was her first time chewing, and the brown, shit-like substance was smeared on her face, the residue displayed on the gallery floor. In the parking lot was a mini performance festival, for which the Bridge Club, whose four members (Emily Bivens, Christine Owen, Annie Strader and Julie Wills) live in various American cities, parked their trailer in front and performed an ongoing work in which they interact with objects collected from across the nation. All of the artists in the show have a Texas connection of some sort, but given the diversity of their backgrounds (with many having studied at out-of-state art schools), the big group show proved that Texas art is as mutable a category as American art.