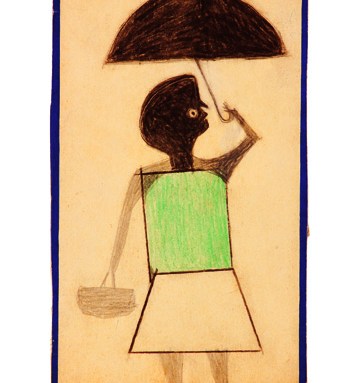 Self-taught artist Bill Traylor will be the subject of two exhibitions at New York’s American Folk Art Museum this summer.

“Bill Traylor: Drawings from the Collections of the High Museum of Art and the Montgomery Museum of Fine Arts” (June 11-Sept. 22) will bring together more than 60 drawings from the two Southern museums, in Atlanta, Ga. and Montgomery, Ala., that have rarely traveled out of that region.

“This is the first major museum exhibition devoted to Traylor in New York City,” the museum’s chief curator, Stacy C. Hollander, told A.i.A. in a phone interview. “His work was seen years ago at the Studio Museum in Harlem, but outside of commercial galleries there hasn’t been a show that presents the full scope of his work.”

Complementing the exhibition will be “Bill Traylor in Motion: Drawings from Local Collections,” organized by Hollander and the museum’s recently appointed curator of 20th-century and contemporary art, Valérie Rousseau.

Traylor (1853 or ’54-1949) was born a slave on a plantation in Dallas County, Alabama. He remained there after emancipation, but moved in the 1920s to Montgomery, according to the museum, where he worked as a laborer and in a shoe factory. He lived at times on the streets, at other times sleeping in a funeral parlor’s storage room or a shoe repair shop.

His drawings focus on the people around him, farm animals, and multi-figure compositions that are often referred as recording “exciting events.” Many of his works ended up in the hands of the artist Charles Shannon, who provided Traylor with art materials. “Shannon collected 1,200 drawings from 1939-42,” said Hollander, explaining that that is the date span usually assigned to Traylor’s drawings, which were not individually dated.

“His work tends to be very minimal but with enormous narrative content and a great deal of texture, via reclaimed, recycled paper and cardboard that he drew on,” said Hollander.

“What can one even say about Traylor? His importance is such a given,” New York dealer Andrew Edlin, owner of the Outsider Art Fair, told A.i.A. in an e-mail. “Traylor is absolutely one of the seminal artists in the field of self-taught, or outsider art. Since its discovery, his work has been influential on countless artists and definitely bears re-examination.”