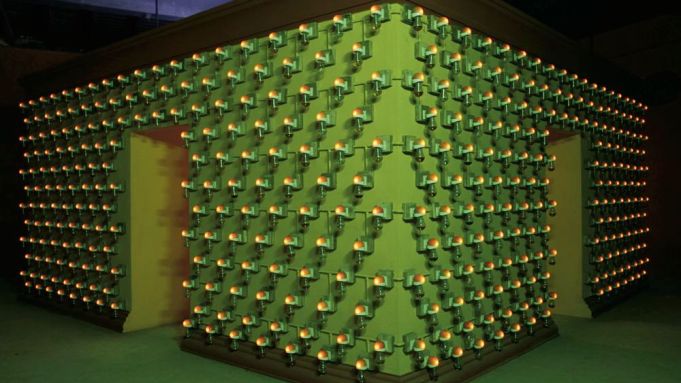 The Kochi-Muziris Biennale (KMB), presented as “India’s first biennial,” survived the crisis that threatened to capsize its inaugural edition. When KMB opened last December in the historic city of Kochi, in the southwestern Indian state of Kerala, it seemed almost certain that this bold initiative could not sustain itself through its scheduled three-month duration. A fortnight before the biennial opened, the Kerala government withdrew a substantial portion of the funding it had promised to the organiz­ers, Bombay-based artists Bose Krishnamachari and Riyas Komu. With many artworks held up at customs or hexed by freight issues, some venues underprepared to host complex installations, and running costs mounting, KMB’s organiz­ers and their supporters spent the biennial’s opening week in desperate fire-fighting. Fortunately, the vocal support of the Kerala audience swung matters in the biennial’s favor; it soon received assurances of official support as well as gener­ous contributions from the Indian business world.

Looking back to early December, it seems clear that the Kerala government gave in to a cabal of detractors who, in an often defamatory campaign, targeted Krishnamachari and Komu for spending most of their budget on trips abroad and the lavish renovation of Kochi’s run-down Durbar Hall as a venue. As Krishnamachari and Komu made clear, their international research trips helped KMB develop strong links with colleagues on the global bien­nial circuit as well as extend its list of participating artists in unusual directions. The exhibition celebrates Kochi’s traditional cosmopolitanism. Its name honors Muziris, the ancient Indian Ocean port city recorded in the Bible and the Greco-Roman trading and navigation tome, Periplus of the Erythraean Sea. Merchants, scholars, soldiers and adven­turers—among them Romans, Jews, Arabs, Persians and Chinese—made landfall here over two millennia, infus­ing Kochi with the flavors of the elsewheres they carried in their hearts. At the same time, KMB—which is, more accurately, India’s second effort in the direction of biennial-making—also carries forward the internationalist impulse of Triennale India, founded by the novelist, editor and art critic Mulk Raj Anand in 1968, but now sadly defunct.

Meanwhile, Durbar Hall, which Krishnamachari and Komu transformed into a climate-controlled contemporary arts venue, is now equipped to host international traveling exhibitions, and is a major addition to Kochi’s cultural infrastructure. Ironically, KMB had a minimal presence there. Most of its nearly 80 artists presented their work further afield, in and around the city’s colonial quarter, Fort Kochi. The biennial’s chaotic yet energetic hub was Aspinwall House: a sprawling, half-ruined estate that once belonged to a British company trading in spices, coffee, tea and rubber. Closed for many years, it now belongs to DLF, the Delhi-based real-estate giant. Walking through Aspinwall’s corridors and along its overgrown waterfronts, or exploring the neighboring Pepper House and Moidu’s Heritage Plaza, one was seized by primal sensory experiences, before vision, before touch. KMB was, overwhelmingly, an olfactory biennial.

In the Scottish-born Australian artist Dylan Martorell’s installation, ground spices turned on a rotating speaker: the air was filled with the heaviness of ginger and turmeric, as well as the sound of recordings that Martorell made during a five-week residency in Kochi. Anant Joshi, of Baroda, Gujarat, created a mausoleumlike structure embedded with grids of electric mosquito-repellent burners from which incense rose, impregnating the closed space and heightening its claustrophobia. L.N. Tallur, who divides his time between the small southwestern Indian coastal town of Kundapur and Seoul, South Korea, built two sloping Mangalore-tiled roofs studded with miniature terracotta figures of yogis just below the ceiling of one of the Aspinwall buildings. Alive with the smell of the first monsoon rain, Tallur’s installation both mimicked and contradicted the ambient architecture, its miniature figures pointing playfully to the dichotomy of security and nomadism, the householder’s life and the ascetic’s.

Every KMB venue was heavy with the dank, musty odor of buildings suspended between collapse and regeneration: long-shuttered warehouses and homes abandoned by families that have migrated across the seas, their yardspiled with refuse like middens, sometimes with nothing between them and the Arabian Sea but a perforated wall. Krishnamachari and Komu had explicitly rejected a curatorial theme, instead inviting the artists to “respond to the ethos of Kochi.” This generated an intriguing coherence, with many of the artworks articulating a poetics of transience and mortality. Also pervasive was the themeof redemptive memory, as in the work of Joseph Semah, an artist of Iraqi-Jewish ancestry who lives in theNetherlands. Semah’s installation, 72 Privileges, recalled a history not of diaspora but of transcultural belonging. Its palimpsestlike drawings, pierced copper plates and lengths of thread invoked the guarantees of securitythat Jews enjoyed in precolonial Kerala, as well as topographical references to Jerusalem.

KMB’s greatest triumph, perhaps, lay in its activation of a non-metropolitan Indian audience for contemporary global art. The biennial recorded 150,000 visitors in December and 250,000 in January; some weekends in January, it hosted nearly 10,000 people a day. While these included art-world insiders from overseas and elsewhere in India, the majority were Kochi citizens and their fellow Keralites. Kerala is a state with a long tradition of radical social reform and universal education, and KMB’s audience was correspondingly varied and ecumenical in its mix, including academics, artisans, filmmakers, laborers, industrialists, lawyers, homemakers and storekeepers. Kochi might actually have provided that near-mythic local audience that every biennial dreams of reaching out to yet is often accused of ignoring—one that here wholeheartedly embraced the new festival taking shape in its midst.

RANJIT HOSKOTE is a Bombay-based cultural theorist, poet and curator.