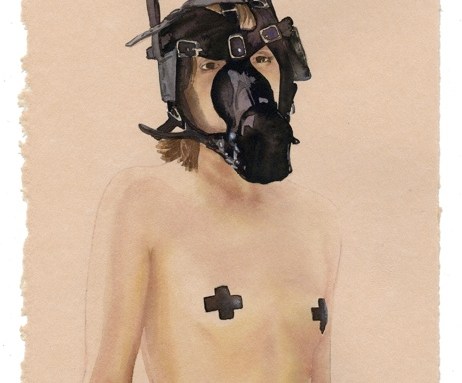 Dawn Black’s solo exhibition, The Conceal Project, is on view at Curator’s Office, in Washington D.C. through March 21st. Kriston Capps is a critic based in Washington, D.C.

Imagine no Barack Obama. Imagine a world with no Hope poster, no O-shaped emblem. Neither a “YesWeCan” world nor a “NoWeDidn’t” world — merely a world in which political upheaval wasn’t the order of the day. Such a world, if it existed, might not look so different from the one imagined by Dawn Black.

Black has drawn some other iconic images that marked the last year-including the Isabella Blow-inspired, Philip Treacy-designed monarch butterfly hat that appeared in Alexander McQueen’s spring 2008 collection. She also draws figures wearing the signature exaggerated nurse uniform and lace face masks from the Louis Vuitton collaboration between Marc Jacobs and appropriation artist Richard Prince. Black taps so-called “low” sources, too, drawing from the pages of National Geographic and other magazines. The drawing of the model in the butterfly hat appears next to a rendering of what may  be a bare-chested, face-covered, gun-toting militant from Somalia’s militant Islamist group al-Shabeeb.

Culled directly from fashion, Black’s drawings emphasize the  customs of dress in order to create a cast of nameless and nearly featureless characters. Their distinguishing characteristics are the feathers, masks, handcuffs, and headdresses they wear. From a bank of character drawings, she creates larger morality plays-drawings in which incongruous figures are paired, the results stark and usually sexual or threatening.

A New Orleans native (the artist currently resides in San Francisco), Black favors the glamorous aspects of African diaspora culture, perhaps most visibly represented in Mardi Gras culture. Masquerade masks make frequent appearances in her work, either directly or cited abstractly in the world of fashion, which she recontextualizes in a trans-national tradition through her drawings. Children dressed for Halloween cast a grisly image alongside detainees drawn from the images of Abu Ghraib.

Black’s perspective is a global one. Any one specific politics — “the politics of hope,” for example — finds no real place in Black’s repertoire. For one drawing, The Quarrelsome Shepherds, Black pictures a discomforting but perhaps realistic portrayal of the U.S. from a global perspective using uniforms. A group of soldiers, their faces shadowed by their helmets, surround two young figures dressed in Stars-and-Stripes colored make-shift superhero garb. They wear American flags for capes and paper-mache masks that might well be bald eagles-but in this context, look more like vulture skulls. An ominous figure looms over them all, a character whose significance is not immediately apparent-simply a figure wrapped in a white sheet with a single cut-out eye hole-who projects menace and authority.

This is the U.S. that much of the world knows despite  — and possibly notwithstanding — the election of Barack Obama. Black’s drawings provide a global gloss of the bizarre social customs that frame material culture — from the glammed-out Los Angeles toddler to a Kabuki theater dancer. Adhering to found images and viewer expectations, Black is able to deliver a nuanced impression of the world — or of the U.S., from the world — that might have very well gotten lost over the exultant months leading up to and following Obama’s election. In Black’s work, the surreal is sobering-people aren’t who they say they are, but what they pretend to be.

Aretha Franklin Was Tracked By the FBI for 40 Years. Here’s What’s In her File