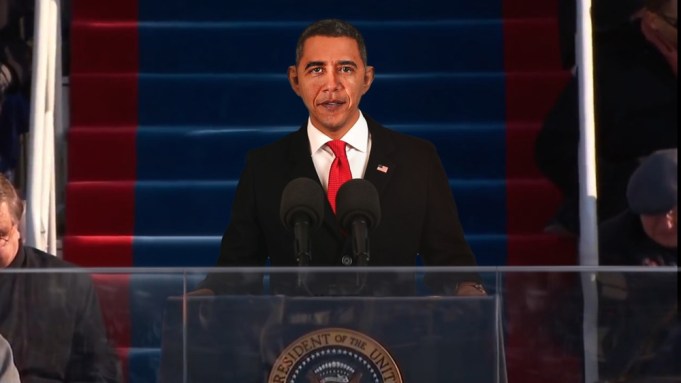 “I am the mouth that produces waves,” intones a disembodied pair of lips, half-submerged in a rippling lagoon. “My words are the vibrations that produce waves of pressure and displacement.” When visitors enter the basement galleries of the Hirshhorn Museum in Washington, D.C., they are greeted by these lips, which make pronouncements about language, sound and materiality in Agnieszka Polska’s I Am the Mouth (2014). It’s the first of six video installations in “Suspended Animation,” an exhibition of digital animation that also includes works by Ed Atkins, Antoine Catala, Ian Cheng, Josh Kline and Helen Marten, which opened Wednesday. At a preview on Monday, Polska said she is interested in the phenomenon of ASMR (Autonomy Sensory Meridian Response) videos, which feature softly sensuous sounds—breathy whispers, fingernails on glass—that trigger tingles in some viewers. In I Am the Mouth¸ Polska’s own voice undergoes slight modifications to make it rasp and sparkle as it issues through the speakers. The figures on the screen are weirdly abstracted. The lips show grotesquely hyperrealist striations of skin tissue, but there’s no tongue or throat behind them. The paleness of the lower lip indicates submersion in the lagoon, but the mouth and the water exist in two dimensions; the images don’t relate to each other as physical entities would. Instead, they’re oriented outward into the gallery, where sounds and meanings produce invisible sensations in the viewers’ bodies.

“Suspended animation” means slowing or pausing the life processes in a body in order to save it from trauma or death. Speculation about the possibility of inducing dormant statesfirst appeared in the late 18th century, and it entered the popular imagination through 20th-century science fiction—think of the hibernation of astronauts in 2001: A Space Odyssey (1968) or Alien (1979), and the attendant fascination with cryogenics in popular culture. Curator Gianni Jetzer said he chose the term as the title of his show because—besides the wordplay—it evokes an extension of the capabilities of what he calls the “carnal body,” which the artists he’s worked with explore through their manipulation of digital bodies. In Warm, Warm, Warm Spring Mouths (2013), Atkins uses various 3-D avatars that he orders online that, through a software application, ape the movements of his own performances for the camera. The imperfect equivalents to Atkins’s body point to a near future when celebrities will be able to license digital copies of their bodies and appear in movies without showing up for a shoot. “The texture of reality has changed,” Jetzer said.

A science-fiction streak runs through the exhibition. Catala said that his installation The Pleasure of Being Sad (2016) imagines a utopia where happiness is so common that sadness has to be advertised. His work includes the only instance of live-action footage in “Suspended Animation.” Catala filmed actors crying to produce a video like one that would be tagged “sadness” on Getty Images. It’s the screen that’s animated. Pressure from a pneumatic tube makes teardrop shapes protrude and recede from the latex surface as the commercial plays. The substrate, not the video itself, offers an analogue to the carnal body here. A caption describes it as a “breathing screen.” Cheng’s Emissary in the Squat of the Gods (2015) also uses elements of fantasy, though instead of the future it’s set in remote prehistory. Cheng doesn’t make videos with discrete beginnings or endings. He programs generative simulations—ecosystems where artificial intelligences interact. (If Atkins focuses on individual avatars, Cheng concerns himself with collective ones.) Emissary is about a clan of pre-linguistic hominids facing natural disaster. They’ve felt tremors in their mountainside home—signaling an impending earthquake—but only one girl is certain that they must abandon it to escape death, and she tries to use her advanced cognitive abilities to convince the others. The soundtrack consists of grunts and monosyllabic utterances, generated from a bank of consonants. Cheng’s animation style is as rough and stilted as the simulated speech; the figures are conglomerates of flat planes, mostly shaded the same gray-beige as the mountain they live on. They often melt into the ground as they move, like stuck characters in a glitching video game—though for Cheng these glitches are a deliberate aesthetic choice. The girl protagonist—who can be watched close-up on a secondary screen to the right of the one that shows the tribe’s activity from a god’s-eye-view—seems to have two conjoined bodies that fold and bend into each other, as if materializing her internal struggle as she tries to save her clan.

For all their fictional inventions of other times, these works are affecting because they address changes to everyday life in the present. Jetzer pointed out that suspended animation, after being a speculative term for centuries, was introduced to hospital emergency rooms in 2014 as a surgical procedure to prevent brain damage in trauma victims. This sort of rupture of an imagined future in the present is strongly felt in Josh Kline’s installation, in part because of the location: his videos that twist iconography of the federal government appear in a museum on the National Mall. In Hope and Change (2015), the image of the real President Obama becomes a skin grafted to the face of an impersonator—a blend of carnal and digital bodies similar to Atkins’s masking, but Kline leaves visible seams, making the effect all the more uncanny. Monitors on the side walls play Patriot Acts (2015), a fantasia on the National Security Agency’s logo (an eagle gripping a key in its talons). In Kline’s animation, the eagle soars through American landscapes, from city parks to southwestern deserts, catching a golden key that tumbles through the sky. In one sequence, the sky is dotted with spinning discs that morph from the NSA insignia to the sunrise of Obama’s 2008 campaign logo; another reworks the mockingjay of the Hunger Games films. The imagery highlights Kline’s interest in the latest thing passing into obsolescence—the Hunger Games franchise is finished, and Obama will have left the White House when “Suspended Animation” closes on March 12, 2017. Dystopias and utopias are always creeping into the present; and the body, its limits technologically extended, can occupy all of them simultaneously.