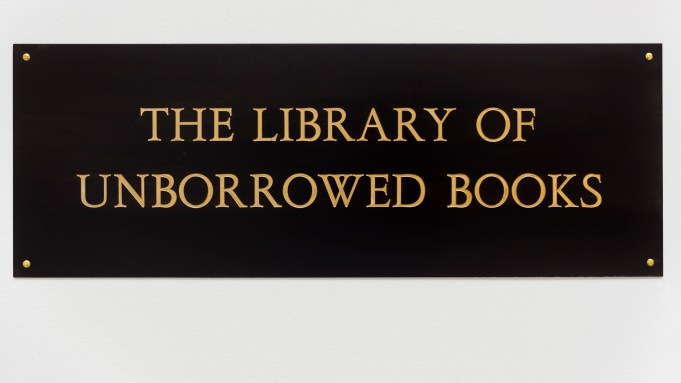 What sadder fate is there than that of the library book that is never checked out, and languishes forever on the shelf? A project by artist Meriç Algün Ringborg, “The Library of Unborrowed Books,” on view at New York nonprofit Art in General (through Mar. 23), displays hundreds of such lonely tomes.

The volumes come from the Center for Fiction, a members-only Midtown Manhattan library founded in 1820 as the Mercantile Library. The timing of the project’s opening was especially poignant, as news came this week from Timbuktu, where fleeing Islamist rebels torched a library containing thousands of manuscripts from the Middle Ages—a reminder of the fragility of words on paper.

Just as if still in the library, the books are displayed on blue metal wall shelving purchased from a university library, and they retain the labels on their spines that are applied by the Center for Fiction. Nearby is a very official-looking plaque with the name of the library.

The artist spoke with A.i.A. last Saturday, the night the project went on view in a three-person exhibition along with works by Shezad Dawood and Anetta Mona ChiÅ?a & Lucia TkáÄová.

The project had its genesis in Stockholm, she said, where the Istanbul-born artist resides since moving there with her Swedish husband. “Public libraries aren’t so much part of Turkish culture,” she explained, “but they are big in Sweden.” The first iteration of the “Library of Unborrowed Books” took place last year with books from the Stockholm Public Library.

“The public library is for me a bit like a museum, in that its mission is to collect and preserve,” Ringborg said. “I’m particularly interested in what falls through the gaps in these systems of archiving.”

There are plenty of instances of humor to offset the pathos. A novel by Margaret Jones, The Confucius Enigma, struck this viewer as a pale shadow of the wildly popular The Da Vinci Code. Clara E. Laughlin’s Everybody’s Lonesome speaks for all these unwanted volumes.

Ringborg pointed out some of the combinations that amuse her, like a book cover with a graphic of two six-sided dice, displayed near another called A Kind of Misfortune.

“We were a little hesitant to put certain books on view, for fear of giving offense,” she admitted, pointing out Louis Pope Gratacap’s Benjamin the Jew. Standing next to it, by chance, is Ian Greig’s The Tragedy of the Chinese Mine, whose title is spelled out in letters that are meant to seem assembled from stalks of bamboo.

“And here’s The Seducer [by Jule Lange],” she said, “which is funny, since obviously that book has never seduced anyone.”