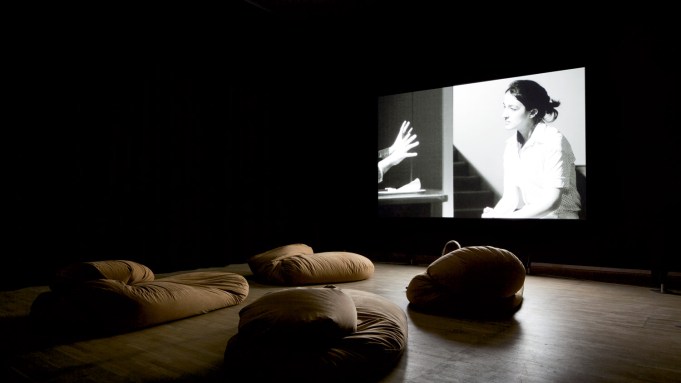 What can we see? What do we hear? How do image and sound relate? What is an image, or an object? How separate is one thing from the next? Such questions proliferate when we watch a work by British filmmaker Emily Wardill, often a somewhat bewildering experience at first. Despite their ostensible narrative frameworks, her recent feature-length films, such as Game Keepers without Game (2009) or Fulll Firearms (2011), are so fraught with ontological issues and strategies of disruption that any hope of straightforward interpretation is deeply shaken, if not totally shattered. Images are elliptical, dialogue is obscured by ambient sound and characters’ consciousnesses seem to overlap without ever really connecting. Instead the emphasis shifts to banal objects, or details of furnishings or costumes, as if to compensate for the little we understand about the films’ protagonists—or they about each other. It is at deliberately destabilized and therefore perilous boundaries—between corporeal and virtual realities, for example, or dichotomous political positions—that Wardill stakes her investigation.

Born in England in 1977, Wardill studied film at Central St. Martins College of Art and Design in London, where she lives when not on a residency somewhere around the world. (She now teaches at Central St. Martins.) Since the early 2000s she has been making enigmatic and compelling films that place her among the front-runners of a new generation of British artists using film in innovative ways to articulate the image-saturated, culturally loaded and coded-to-death condition of our hyper-connected society.

Each element in Wardill’s dense works can be misread. While this is partly an operative principle of her allegorical approach in general, it is also inherent to the genre of melodrama that she has chosen to adopt in several of her most recent works. Cases of mistaken identity often provide the narrative hinge in melodrama, but in Wardill’s hands they do not so much create a dramatic turning point as offer an overarching structure. Fulll Firearms (which premiered at MuHKA, the Antwerp Museum of Contemporary Art, in December 2011, and was subsequently included in Wardill’s first solo exhibition at the Badischer Kunstverein in Karlsruhe, Germany) concerns Imelda, an independently wealthy, flamboyantly dressed, 40-something woman who has commissioned an architect to build a residence. The house is not for her own use, however, but for the victims of her father’s arms-dealing business (the source of her wealth), or rather their ghosts. The premature ruins of the half-finished modernist house, which we see perched on a cliff above a rocky gray coastline, are inhabited by migrant squatters, whom she takes to be the ghosts. This case of mistaken identity is a function of the general delusion that defines Imelda’s character. Moving enigmatically through the scenes in elaborate costumes and headpieces, while talking about herself in the third person and uttering oblique phrases that never quite seem to hit their target, Imelda seems to exist more in two dimensions than three. Whereas the hearty squatters drink, have sex, dance and sing, engaging in life to the full, it is as if Imelda herself is the spirit, consumed by the ghosts of her past. “Are you real?” one of the squatters asks her. “You look like you are made of glass, about to shatter into a thousand pieces.”

In fact, glass is used pointedly in Fulll Firearms as a disruptive rather than transparent element, refracting images or muffling conversation. Transparency, in general, is not to be trusted. Dialogue is similarly unreliable: a disembodied voice issuing from a car radio seems to usurp the role of narrative voiceover, while conversations may be diverted through gadgets (the cell phone wins over face-to-face communication), or recorded and played back to alienating effect. Those conversations we do hear are characterized by misunderstanding: the architect does not believe Imelda’s fantasies about spirits, but goes along with her, not wanting to lose this lucrative commission. Likewise, the squatters humor her, not wanting to be thrown out.

The very premise on which the film is structured-building a house for spirits, who have no bodily functions or need for dwelling-is essentially a mix-up of real and unreal. However, the presence of the squatters suggests a porous boundary in which habitation substitutes for haunting. Real needs displace those that are imagined, and play a formative role in an existence otherwise defined by slippage or non sequitur. Though virtual reality, dreams or distraction may seem to take over one’s physical self and material surroundings, Wardill suggests, such mental states are nevertheless contingent upon the physical. The head can never fully escape the body.

The story of Imelda is a reworking of that of Sarah Winchester, widow of gun magnate William Wirt Winchester (1837–1881), and the house in Northern California that was under construction for almost 40 years, until her death in 1922. Winchester believed the house to be haunted by the ghosts of those killed by her husband’s guns, and its continual construction was an attempt to appease them. In the final version of Wardill’s film, however, the underlying structure of that particular history is reworked to the point of invisibility. Her movies are always developed through a long process of research, and sometimes, as in Fulll Firearms, through experimental workshops in which the script evolves. “That actual process, of turning text into a scene, is part of the ‘content’ of the work,” she says.1 One of the workshops for Fulll Firearms, organized through the Serpentine Gallery’s Centre for Possible Studies, involved collaborating with recent migrants to find ways of using melodrama to explore experiences of housing and labor, issues which are implicit in the film’s multiracial cast of refugee squatters. Such organic, collaborative development results in a finely calibrated work that approaches abstraction, if not opacity, and hangs on a highly determined but nonetheless hidden set of referents. Certain elements—the title, for instance, or the characters’ unusual names-remain unexplained. Yet they become fully assimilated in a broader sublimation weaving in oblique political references that nonetheless have a decisive effect on the film’s meaning. The result, as Wardill describes it, is a “sonorous” means of communicating, an attempt “to communicate directly with the will while bypassing the intellect.”2

Wardill’s latest film, which premiered at the Danish National Gallery of Art, Copenhagen, in May 2012, is the first chapter in a longer project concerning mind/body separation and the subconscious overspill of emotion into physical action. Its unwieldy title, found himself in a walled garden on the top of a high mountain, and in the middle of it a tree with great birds on the branches, and fruit out of which, if you held a fruit to your ear, came the sound of fighting, is taken from an essay by W.B. Yeats, whose exact relation to the film remains, as usual, unexplained. Set in a physiotherapy treatment room, the work follows two parallel relationships. The first is between Eitienne, a neurologist, and his lover, Slalem (whom he met on the Internet), the second between Eitienne and his patient, Simon, who is unable to move his body without looking at it. Simon’s condition-manifested in clunky, rehearsed-looking movements, since the automatic connection that allows one to move without thinking about it is severed-is echoed in the often clumsy attempts between Slalem and Eitienne to understand each other’s words and actions. The disconnection that Simon feels is related to that of the lovers, each trying to influence the body of the other and to achieve “wholeness” through love or desire.

For the film, Wardill conducted a series of workshops with actors in Mälmo, Sweden, at the Lilith Performance Studio, resulting in a highly physical work that emphasizes a kind of bodily intelligence, rather than one controlled by the mind and expressed through language. The film’s starkly lit staging, shot in black-and-white, echoes expressionist cinema, as do the characters’ exaggerated emotions and movement, whereby gesture plays a leading role as the often unconscious conveyor of feeling. The weight given to such elements induces a similarly “embodied” state in viewers, who find themselves empathizing quite physically with the difficulty Simon experiences in lifting up a cauliflower, or who cringe when Slalem, trying to provoke Eitienne, bites into a lemon as if it were an apple.

“That the body is a cipher within a market seems to overshadow its sensorial value-or ‘sense’-as in common sense,” Wardill said in a recent interview.3 Sensorial value is necessary in order to allow for compassion, as the love story in found himself . . . suggests, and compassion is necessary, not just for personal relationships, but as an essential component in the bonding of society. The disconnection between head and body, or a body and its image, has political repercussions. Freud (himself a figure who looms over much of Wardill’s work, in which psychoanalysis and the case study come up frequently) plainly stated the situation when he linked the sexual drive with the foundations of civilization: “Civilization is a process in the service of Eros, whose purpose is to gather together individuals, then families and finally tribes, peoples and nations in one great unit, humanity. Why this has to happen we do not know; it is simply the work of Eros. These multitudes of human beings are to be libidinally bound to one another.”4

Wardill uses sickness, mental imbalance or the vulnerability induced by love to conjure a society whose cohesion is itself in danger. Thick with compounded references, her films are an appeal to extra-cerebral possibilities. Sense results not just from understanding, but from correspondences perceived beyond the limits of representation: where sounds, images or actions may be seen with the body and felt with the mind.

Emily Wardill’s film found himself in a walled garden on the top of a high mountain . . . was on view at
the Statens Museum for Kunst, Copenhagen, Denmark, May 11-Sept. 16. Fulll Firearms was included in her exhibition of the same title at the Badischer Kunstverein, Karlsruhe, Germany, Jan. 27-Apr. 9.

Kirsty Bell is a writer who lives in Berlin.