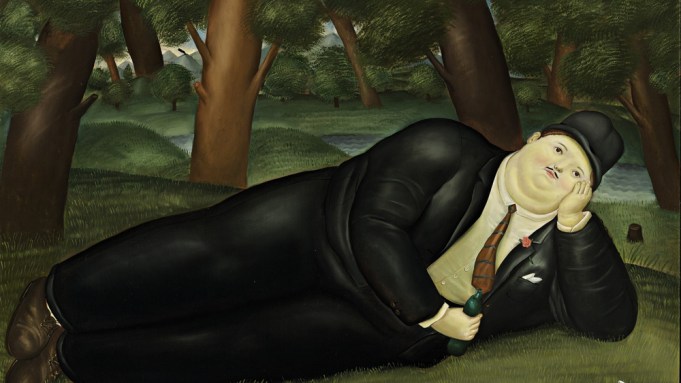 Contemporary art critics by and large dismiss the work of Colombian-born Fernando Botero. His signature, monumental sculptures and figurative paintings of rotund figures are blasted by detractors as simplistic caricatures of fleshy forms in sunny familial scenes. During a 1999 interview on 60 Minutes, art critic and Columbia University professor Rosalind Krauss dismissed Botero’s output as having “absolutely nothing to do with contemporary art.”

Despite critical oversight, the demand for Botero’s work is only growing, says Carmen Melián, director of Sotheby’s Latin American department. Melián tells A.i.A. that “the fastest growing segment of his market is coming from the emerging markets: India, the Far East and the former communist countries.” Sale records for both painting and sculpture were set in the past few years: $2 million for his painting Four Musicians (1984) in May 2006, and $1.6 million for his sculpture Smoking Woman (1986), in November 2007. It is not surprising that Sotheby’s hopes to cash in on Botero’s newfound popularity by hosting a single-artist sale of 23 works as part of its Latin American evening sale on May 25.

Sotheby’s Axel Stein came up with the idea for the auction after being offered a selection of classic Botero sculptures by two major private collectors who declined to be named. These works form the nucleus of the upcoming sale, which includes resin, marble and bronze sculptures, oil and pastel paintings, and graphite and charcoal drawings, dating from 1970 to 2002.

Can the market absorb such a large influx of Botero works? According to Stein, “At the end of the day, it’s not that many more Boteros than we normally offer. The difference is that now we have more important pieces, so we decided to produce an homage to the artist, who turns 80 next year.” Sotheby’s offered nine Botero works at its November 2010 auction, bringing in $2.8 million, or 16.6% of its two-day sale total.

“Botero, like Picasso and Warhol, is a household name; it’s an immediate and quick read. Many new people are buying his work and most are not Latin American,” explains private art advisor Ana Sokoloff. Dispelling the notion that Botero’s work is disconnected from real-world issues, she added, “The ‘70s and into the ‘80s can be referred to as his mature period, when his subject matter was generally quite satirical, depicting social and political power issues in Latin America.”  A prime example from the sale is the pastel El Presidente, 1975 (est. $300-400,000), in which Botero parodies a traditional Latin American head of state. The figure is loaded down with military medals in the style of 17th- and 18th-century Spanish portraits of kings and noblemen. Botero depicts a politician that was more concerned with style than substance, during a period when military dictatorships in Argentina, Brazil and Paraguay were in full force.

“Botero came to Spain in the 1960s as a very political artist,” explains Melián. “Many people don’t know his history and the political history that it springs from. Some of it’s envy, some people don’t like figuration, and some don’t approve that it has mass appeal, rather than just intellectual appeal.”

Celine’s Next Men’s Show Will Be at Le Palace