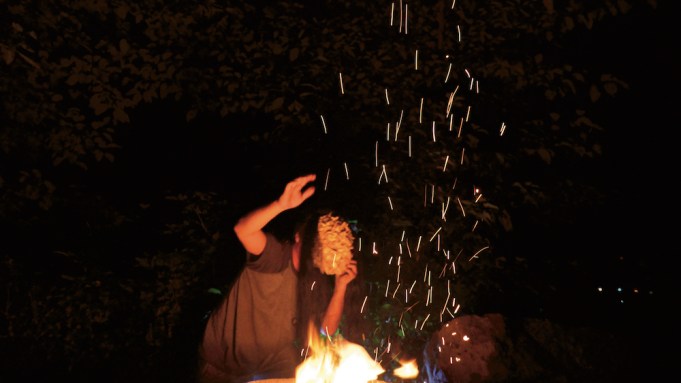 The commodification of Indigenous culture is a global phenomenon. Souvenir shops throughout southeast Alaska sell imitations of Northwest Coast Native masks made in Indonesia. Nicholas Galanin (Tlingit/Unangax̂), based near Juneau, offers such kitsch a path to salvation through the blade of his adze. In his video Unceremonial Dance Mask, 21st Century (2017), the artist sits at a cedar block, holding a wooden mask carved in a vaguely Tlingit style. Adze in hand, he begins to methodically chip away at its surface. The soft, tropical wood gives easily under his percussive strikes, peeling from the mask in flakes that fall around his feet. The rhythm of the adze is broken only by his shifting grip on the splintering mask, as he seems to search for some new form in the grain. He carves until only a single eye stares back at him. Galanin does not slow, and his blade bites into the pupil, shearing this last aspect from the mask, which is soon reduced to smithereens. Galanin sheathes his adze and gathers up handfuls of the woodchips. The camera cuts to show a rough pile of them on a table. As his staccato adze strikes are heard again on the soundtrack, he frames the pile with two long bunches of hair. Then a male figure is seen dancing in front of a sparking fire at night. He covers his face with the fragments of the imitation mask, now reshaped into a hard, featureless visage. No longer resembling the Northwest Coast objects on which the Indonesian carvers base their copies, the mask is danced with a new life before the flames.

As with the mask in his video, Galanin breaks apart the commodifiable constructions of “Indianness” that preserve outdated ideas about traditional visual culture and then transforms them into objects, installations, and images. White Carver (2012–) is a performance installation inspired by Galanin’s tenure as a “show carver” at the Totem Hall of Sitka National Historical Park, where he gave carving demonstrations, usually behind glass, for tourists. For the installation, Galanin puts a white man in a glass case or behind a velvet rope to whittle an untraditional wooden object (a “pocket pussy,” for example). White Carver engages the long history of the display of Indigenous peoples as museological specimens or as producers of authentic cultural objects.

Galanin often satirizes the demand for “authentically Native” curios that is still pervasive throughout Alaska. For I think it goes like this? (2012), he painted black and cut into blocks an Indonesian-made totem pole of a type usually found outside souvenir stores. Under the Indian Arts and Crafts Act, the faux pole could not legally be sold in the United States as Native-made (though the source of such objects is often concealed as a sales tactic). Galanin’s hands transformed the Indonesian product into a work of genuine Native art. The modified readymade, a familiar trope in contemporary art, here becomes a cultural transmutation, whereby a cheap imitation acquires the status of Indigenous art. What most distinguishes Galanin’s recent work is his ability to take on, disrupt, and reconfigure the many conceptions of what “Native art” means for audiences in different local, national, and international contexts.

Galanin comes from a family of makers. His father and uncle taught him that Tlingit artists shape their culture with their hands. He also inherited his father’s deftness at engraving, and there is a high demand for the silver and copper bracelets that Galanin now barely has the time to make in the Sitka studio he shares with his brother, Jerrod. In 2003 he earned a BFA in jewelry design at London Guildhall University in the UK; it was one of the only concentrations his instructors there found acceptable for the Tlingit forms he wanted to explore. But Galanin does not separate what might be called his “traditional” practice from his art.

The fruits of Galanin’s education in Tlingit carving can be seen in sites throughout his community. He worked as an apprentice on the Eagle-Raven screen carved by his uncle for Sheet’ká Kwáan Naa Kahídi (referred to in English as the Sitk­­­ ­¯a Community House), and with Preston Singletary on the glass screen of the Clan House inside the Sealaska Heritage Institute in Juneau. Clan houses mark claims to communal land, and Galanin echoes that practice by referring to meaningful sites and using local materials to root his art in his, and his community’s, contemporary connection to place and environment. The Eagle-Raven screen serves as a backdrop in the second part of his 2006 video Tsu Heidei Shugaxtutaan (We will again open this container of wisdom that has been left in our care), 1 and 2, which shows a dancer in full regalia performing a traditional Raven dance to a pulsing electronic soundtrack. The blend of disparate music and dance forms unsettles cultural definitions, even as the screen situates the dancer in a specific place.

Galanin is currently the lead carver on a pole to be raised at Savikko Park on Douglas Island, across the channel from downtown Juneau, as a memorial to the Tlingit families that were displaced when their winter residence, the Douglas Indian Village, was burned down in 1962 to build the park and harbor. The pole, designed by master carver Nathan Jackson, will join another erected earlier this year at the nearby Gastineau School, built on desecrated ancestral burial grounds. The project is of deep importance for healing this wound in the Douglas Tlingit community.

Last year, with his brother and the craftsman and former curator Steve Brown, Galanin built a dugout canoe. The 27-foot-long boat, named Dachxanx’i Yán Yaagu (Grandchildren’s Canoe), was carved from a single red cedar log using both modern and pre-contact techniques. In October, Galanin joined the crew that took the canoe on the water for the first time. The project is intended to contribute knowledge to the community by helping Tlingit youths learn subsistence hunting and fishing techniques. Galanin’s young son was also on board.

In recent years, Galanin has embarked on artistic and political collaborations abroad with increasing frequency. This month he begins a tour around Europe with the Black Constellation Collective, a group of musicians, artists, and writers from the US and Canada. Last spring he and Oscar Tuazon produced “Indian Water—The Native American Pavilion,” an independent project for the 57th Venice Biennale. On the lawn of the Giardino di Ca’Bembo, one of the largest green spaces in Venice, the artists erected a circle of worn wooden posts in the tradition of the longhouse, albeit with a modified form. The posts were reclaimed briccole, pilings used to guide boats along safe passages in the Venetian waterways. Most of them were so eroded that they could support only a single crossbeam. While invited artists were supposed to occupy the pavilion throughout the exhibition’s run and make work on each of the posts, in the end only Galanin’s brother contributed to the project by nailing numerous miniature tináa (ceremonial shield-shaped coppers representing wealth and status) to one of the posts. His piece underscored the historical role of the longhouse as a ceremonial site to welcome visitors, who on the Northwest Coast, as in Venice, would typically arrive by water.

Galanin and Tuazon participated in the protests against the Dakota Access Pipeline at Standing Rock, and they sought to put the Venetian waterways into conversation with the work of Indigenous water protectors and activists fighting for clean water. The site of the pavilion is polluted; there was an incinerator in the Giardino in the nineteenth century and the soil there contains dangerous levels of dioxin. Despite this, the Giardino has been occupied for several years by students who are protesting its sale by Ca’ Foscari University to commercial interests. “Indian Water” was thus erected illegally with the cooperation of the occupying students, and while the university has largely abandoned the site to the students and community, indicators of its contested status remain. The main doors are locked and signs declare the space is closed due to health risks, which made it nearly impossible for visitors to find and access the work. A sign erected by Galanin and Tuazon in the Giardino read no one is illegal, connecting the students’ occupation to the broader refugee and migrant crisis, while also evoking the slogan that emerged from Standing Rock in response to the Trump administration’s Muslim ban: “No ban on stolen land.”

“Indian Water” used the local context and building materials to claim a space for Native artists unrepresented by other pavilions in Venice. The nationalist atmosphere of the Venice Biennale has long posed a challenge for Indigenous artists who are resistant to the colonial terms of statehood enforced by the pavilions; in cases where they are invited to show there, they must accept these terms as a necessary condition of their participation. But Galanin and Tuazon, by keeping “Indian Water” independent of any nation, avoided playing the Biennale’s game. Furthermore, with its invocation of the welcoming protocols of the longhouse—and the use of repurposed briccole, which guide ships to shore—“Indian Water” proposes that Indigenous models of hosting might have a place in the nationalist context that otherwise precludes them.

If the Native American pavilion was an intervention at the heart of the international art circuit, Galanin’s other projects have activated alternative networks by engaging artists and communities that share similar experiences of colonial history. He frequently takes part in pan-Arctic projects; Envoy (2016), a video made with Allison Akootchook Warden, shows a polar bear pacing angrily in a dirty zoo as a symbol of communities in the North trapped by the existential danger of climate change. In June the work was included in “Subsistence,” an exhibition at the Arctic Arts Festival in Harstad, Norway. Galanin flew there for the show, and afterward performed with his electronic music group Indian Agent at Riddu Riđđu Festivàla, an Indigenous music festival organized in a coastal Sámi community northeast of Harstad.

Galanin has been developing relationships along the Pacific Rim as well. In 2007 he earned an MFA in Indigenous Visual Arts at Massey University in New Zealand, and he has visited with Ainu artists in Japan to to lay the groundwork for future collaborations. It has become increasingly common for Indigenous artists to draw on alternative global networks to make artistic and political collaborations in pursuit of cultural sovereignty. So as Galanin splinters the Indonesian-made masks that travel the channels of global capitalism, he is also working to build an international Indigenous network that could offer an alternative to globalism as we know it. The eventual goal of Galanin’s work, perhaps, is for him to no longer need to confront and break down the specters of stereotype and authenticity manifest in the commodification of his culture. To escape the narrow conceptions of ethnicity would be the freedom to create only in the present tense, unhindered by constructs of the past—a relationship to time suggested by his Tlingit-language name, Yéil Ya-Tseen, “Raven Be Alive.”