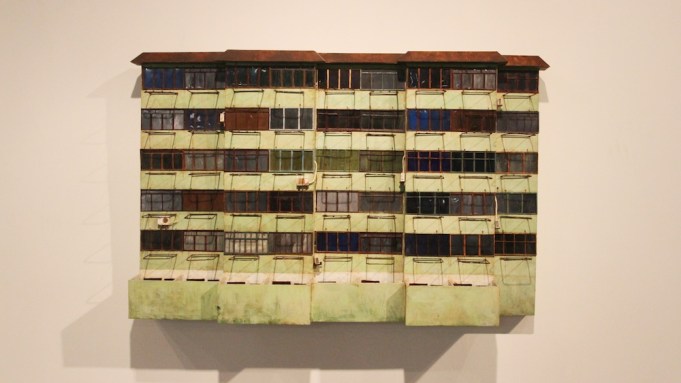 Chen Tianzhuo is a 28-year-old known for bright cartoonish drawings and absurdist assemblages involving components like shark jaws and a French horn, a monkey skull and instant noodles. Peng Xiaojia, age 58, is sculptor whose works range from naturalistic female nudes to slightly menacing semi-abstractions. What do they have in common? Both are “emerging” Chinese artists with recent museum exposure in Shanghai. Yet they exemplify not only esthetic and generational differences but two starkly contrasting approaches to gaining fame in China’s jostling, overcrowded art scene.

It’s a game with high stakes, since successful artists in the People’s Republic today typically enjoy huge studios, rambling domestic compounds, teams of assistants, several vehicles, a staff driver, and a housekeeper who cooks—all considered routine. They don’t even qualify as showing off.

Exactly who will be next to win critical acclaim and instant riches has become a burning question in China over the past several months. Since summer 2012, Beijing has seen the “Future” exhibition at the Central Academy of Fine Arts (95 artists), a massive survey at Arario Gallery (100 artists), “On|Off” at the Ullens Center for Contemporary Art (50 artists) and “Memo I” at White Space (13 artists). Participants in these shows—and kindred others—were nearly all born after 1976 (the year Mao died and the Cultural Revolution ended), making them prime candidates to succeed China’s first and second wave of avant-garde artists: Wang Guangyi, Yue Minjun, Zhang Peili, etc.

But how? Artists today no longer have the readymade theme of the great transition from Maoist collectivism to capitalistic bonanza. Consumerism in the cities and poverty in the countryside, a socioeconomic inequity almost beyond measure—these are now taken for granted by new artists who seek signature topics and formal devices, along with their own career opportunities. Events these days in China’s second art city, Shanghai, give strong—and somewhat conflicting—clues to a winning strategy.

Chen Tianzhuo was selected along with six other artists (Gao Mingyan, Liao Fei, Su Chang, Xiao Longhua, Andy Mo and Zhang Yunyao) for “Existence—Follow Young Artists Group Exhibition II” (Feb. 23-Mar. 21) at MOCA Shanghai. In order to make the show “super fresh,” the private museum’s youthful curator Wang Weiwei chose artists, all born in the 1980s, who had not appeared in any of the big Beijing youth roundups.

“Existence” was, in other words, an example of Western-style talent prospecting of the sort currently practiced from Berlin to Bushwick. Find some hip young artists, create a catchy rubric and pitch the newness of it all, hoping for both synergy and potential breakouts.

With such shows, the biggest difference lies in the scale of Chinese response. Collectors in the PRC frequently treat these post-1976 roundups as shopping lists, sometimes coming away with a full sampler for starting a private art trove, sometimes buying up a neophyte artist’s entire body of work in one fell swoop. Public awareness spreads dizzyingly fast—via social media like Weibo and WeChat, on websites like Randian, and in the pages of publications ranging from the critically serious Leap and Yishu to the glitzy Harper’s Bazaar Art.

But for artists whose work resonates (even faintly) with tradition and who are open to implicit approval from the powers that be, there is an older method, based on guanxi (personal networking). Thus Peng Xiaojia, who has spent his working life in rural New Hampshire, showing his sculpture only intermittently, presently finds himself with a full retrospective (through Apr. 7) that fills the entire Shanghai Oil Painting and Sculpture Institute (SPSI).

The lineup of dignitaries at Peng’s Mar. 14 opening included a soon-to-be-dean of sculpture (and former Peng classmate) at the Central Academy of Fine Arts in Beijing, two of the artist’s mentor-professors from the U.S., and the highly influential Xiao Feng, retired head of the China Academy of Fine Arts in Hangzhou, a family friend. The SPSI space has been temporarily transformed, with boxy artificial columns rising from floors strewn ankle-deep with wood chips. A large, handsome catalogue, with contributions by Xiao Feng and other worthies, accompanies the show.

Hovering solicitously near the painfully shy Peng, who could barely whisper his thanks at the podium, was his real-estate mogul sister, owner of the city’s Original Song Gallery, who engineered the event.

This friends-and-colleagues approach, far from fading away with the onslaught of globalism, seems in fact to be resurgent, especially given a growing emphasis on “Chineseness” as the People’s Republic seeks to reestablish links with its cultural past (systematically broken under Mao) and to define its identity as an emergent superpower. Not only is the domestic market for Chinese antiquities enormous and soaring, but galleries and museums are now placing tremendous emphasis on contemporary ink-painting exhibitions.

Cool young artists don’t neglect their guanxi either. Avant-garde peers and supporters may patronize snazzier galleries than their Old Guard confreres, and may spend more time in louche bars than in quaint backstreet teashops, but everyone is hip to the fact that things get done in China in one of two ways: unofficially and inventively, because you know someone; or officially and ceremoniously—because you know someone.