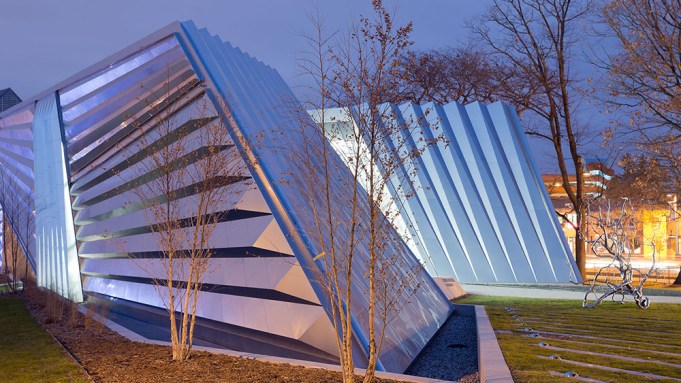 A singular, bold work of chiaroscuro in slashing steel by Pritzker Prize-winning architect, Zaha Hadid, the Eli and Edythe Broad Art Museum opened this weekend in East Lansing, Mich., interpolating its uncompromising modernity into the Michigan State University Campus like a dare.

Two exhibitions inaugurated what the museum says will be a perpetually rotating series of exhibits: “In Search of Time,” a compelling collection of multi-media contemporary and historical art and “Global Groove,” a collection of 12 video installations by artists from 10 different countries. (There are no plans for a gallery to house the permanent collection.)

Philanthropist Eli Broad, who attended Michigan State University, donated $28 million toward the project’s $40 million price tag. He compared the building to the Guggenheim in Bilbao, Spain, for its striking appearance and its potential to put East Lansing on the global art map.

“I knew that an exciting piece of architecture would make a big difference,” he told A.i.A. during a museum press preview Friday. He noted that the museum expects to draw nearly $6 million in new revenue to the region annually.

“This makes a statement,” Broad added. “This will get people excited. This will make people want to come see the building and the art.”

Hadid’s bold, trapezoidal design was the weekend’s most obvious attraction; the museum’s aggressive, almost violent form amid the surrounding redbrick campus architecture demands reckoning from even casual passersby. The interior space presents a softer and more meditative side. Sunlight streams in through panes of glass, warming the white walls and polished concrete floors, reflecting off the space’s myriad surfaces in unexpected ways.

“We knew that the site was a crossroads and the building is not very big, so we thought of it almost like a jewel box, and that maneuvering the trapezoidal spaces would almost explode that site, would make it much bigger,” Hadid said during a panel discussion on Saturday.

Such “tricks,” she added, “do work. They do make space stretch, so you stretch beyond the boundary of the building.”

Hadid’s design is, in one sense, the exhibiting artist’s best friend.   Surprises beckon one around the next corner and spiraling up the stairway, onward to find the resting place of each slanting sunbeam, the end of every line and vertex of every angle, the depth of every shadow. In this way, rather than eclipsing the artwork it houses, the design compels one ever deeper into the museum’s 46,000-square-foot interior-in short, to stay and explore.

Sam Jury, a Cambridge, England-based mixed-media artist whose work is featured in both inaugural exhibits, said she was pleasantly surprised by the warmth of the interior. “There’s also a real sense of the inside and the outside coming together,” Jury said, adding: “The space itself is a nice place to navigate and just a nice area to walk around and be in, and I think it makes you want to stay in the space longer and come back.”

Jury’s work is the most heavily represented in the current exhibits, comprising two videos and five large-scale photographic prints. In keeping with the temporal theme of the larger exhibit, “In Search of Time,” the faces of her female subjects in works like A Thousand Pities III (2007-2008) and Nothing Is Lost (2002) are tentative, ephemeral, as though on the edge of disappearing not only into shadow, but into non-existence. Haunting, they are faces that need the light to survive. One sees the Virgin Mother in these gauzy, often veiled faces; not to mention Vermeer, or Steve McCurry’s famous photo of the “Afghan Girl,” published on the cover of National Geographic in 1985.

“The work deals with this idea of suspending time and actually negating aspects of time,” Jury said, adding later: “I only realized very recently that I always work with this idea of things being almost like signifiers, actually, rather than being a particular identity.”

“In Search of Time” [through Feb. 10], features a collection of mostly 20th and 21st Century artists, including Josef Albers, Larry Clark, Fairfield Porter, along with several mid-late 19th Century African sculptures. Its centerpiece is undoubtedly a room devoted to three triptychs that vie with one another across centuries,: Three Unidentified Men (1985), by Andy Warhol, a series of three Polaroids of three preening young men who look fresh from prep school; second, The Crucifixion (ca. 1400) Paolo di Giovanni Fei is a small masterwork of pre-Renaissance Italian iconography; and The Kingdom of the Father (2007) by Damien Hirst, a towering installation resembling three stained glass windows but constructed of household gloss slathered atop thousands of brightly colored and detached butterfly wings on canvas.

“‘In Search of Time’ became for me a proposition, a suggestion that one way of connecting the dots with art history and showing a progression of thought and preoccupation was through artists’ exploration of time and our response,” said Michael Rush, Broad Museum founding director.

The second exhibit, “Global Groove,” running through Feb. 24, comprises international works of meditative, generally short-form looped videos, starting with a Nam June Paik video from 1973, from which the exhibition takes its name. Other notable works include the unnerving Comb (2008) by Chinese artist Li Ming, which depicts the mechanical claw of a demolition backhoe combing a young girl’s hair through a giant hole in the wall; My Father (2010), by Pakistani artist, Basir Mahmood, a touchingly frustrating close-up of an old man’s weathered hand struggling unsuccessfully to thread a needle; and Agony; Never Ending (2009) by Iranian artist Negar Behbahani, a surreal nightmare of women’s faces superimposed on spinning, interlocking gears.

“The world is turning east, that’s sort of happening anyway,” Rush said. “It’s a personal interest of mine, but it’s also I think what’s happening in the world and here, in East Lansing.”