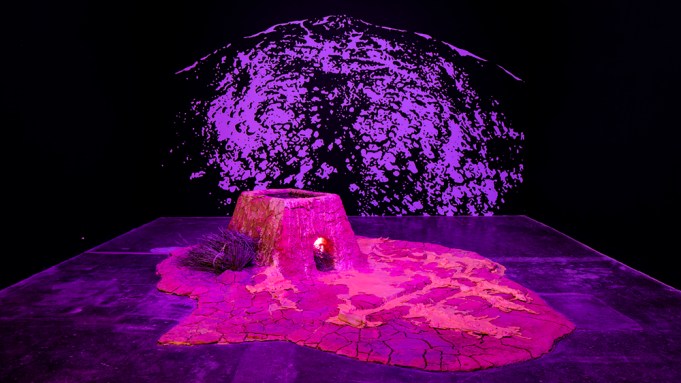 When a US Customs and Border Protection officer asked Mexican writer Valeria Luiselli why she and her family had driven so far from their home in New York to the southwestern area of the United States, she responded: “For the open skies and the silence and the emptiness.” It was 2014, and there was a crisis on the southern border. Tens of thousands of undocumented and unaccompanied minors were crossing into the US. They were deported en masse. A few policy changes put a Band-Aid on the crisis from the US perspective, but the crises in the Central American home countries of those children never let up. Luiselli took her family on the road trip not only to experience the landscape, but also to study the experiences of young asylum seekers—research for her 2017 book, Tell Me How It Ends: An Essay in Forty Questions. The natural beauty and political complexity of the American Southwest attracts myriad writers and artists. The current exhibition at Ballroom Marfa in Texas, on view through September 5, considers the landscape through a meditation on objects and material, their potential for movement and testimony. Each part of its title—“Candelilla, Coatlicue, and the Breathing Machine”—refers to a theme explored by one of the three participating artists: Candice Lin, Fernando Palma Rodríguez, and Beatriz Cortez.

Marfa is so remote that in getting there you acquire a sense of your body in the landscape. I took a particularly long route, traveling from Mexico City through the Reynosa border crossing at the southern tip of Texas, then a few hundred miles to the northwest. The subtropical Rio Grande Valley gave way to wine country, followed, as the altitude increased and the air thinned, by the dry and scrubby emptiness of the high Chihuahuan Desert. When I arrived at Marfa, I recognized elements of these environments in the exhibition. Ballroom Marfa commissioned the artists to create new pieces to show alongside some of their older ones, and all three participants used natural materials from the region. Palma Rodríguez’s titular sculpture Coatlicue (2018) is made of Marfa stones placed on the floor in the shape of a slithering snake. Unlike most of his other works on display, this one has no moving parts. Coatlicue is the mother of several gods for the Aztec people, a fertility symbol who wears a skirt of snakes. Palma Rodríguez’s sculpture is dusted with corn flour, a food so essential to Aztec culture that it took on sacred qualities. A metate, a stone on which corn is crushed to flour, serves as the serpent’s hood. This sculpture reads as a fetish object uniting the culture of central Mexico with the land of West Texas. Nearby, a tall steel contraption stands like a sentinel: The Infinite Mixture of All Things Past, Present, and Future (2019), by Cortez. A hydraulic gear turns for one minute of every thirteen, and the sculpture’s components move like pistons, lifting the beds of tiny sprouts that sit atop its framework. These plants are engaged in silent photosynthesis and respiration, which is why Cortez nicknamed her sculpture “The Breathing Machine.” I worry for them: these nascent samples of flora indigenous to the Americas are wilted.

More native flora can be found in the darkened back gallery, where a new work by Lin has the following list of materials: “Candelilla wax, beeswax, red clay, cement, paint, grow lights, oil barrel, stagnant water, dried and living candelilla plants.” Lin illustrates metaphors that she derives from research into the history of a material’s fluctuating commercial and social value. She has cooked the traditional Chinese dish of beggar’s chicken in clay vessels sculpted to look like the Koch brothers (Beggar’s Revenge Chicken, 2015) and fed cockroaches on a sugar-paste sculpture of a Chinese vase depicted in a Dutch still life (A Warning to Survivalists: White Gold, 2016). The work on display here is a living diorama that relates the extent of the valuable plant’s trade and propagation and the parallel spread of disease, as suggested by the title: on the back of syphilis mountain candelilla grows (2019). The room is lit by purple grow lights, making it difficult to see, but what can be made out is disturbing. Wax spills off a house-like structure of clay and cement, spreading across the room, touching wax molds of hands, feet, and faces. The material is extracted from the candelilla plant, while the contaminating mix of body parts speaks to the arrival of syphilis in Europe on Columbus’s ships, as well as the human cost of the colonization of the Americas.

Everything in this exhibition moves or has the potential to move, or illustrates the movement of things and bodies. There were twenty-four works in this exhibition, and while many suggested violence, only one came close to physically assaulting me. As I approached the two tall ladders with cardboard coyote heads of Palma Rodríguez’s Xi mo matlazacan ce cehce (2006) to inspect the mess of wires and circuit boards at its base, one of the ladders suddenly swung on its wheels. I jumped back and it hit the wall. Its partner started moving as well. They were both aggressive and charming.

Palma Rodríguez’s tricks are complemented by chaos on the adjacent wall, where three large watercolors by Lin (Failed Matriarchy, 2009; Raising the Dead, 2008; Birth of a Nation, 2008) depict violent groups of naked people in the jungle. Their attacks are depicted with baroque and expressive gestures of ink and paint, suggesting the darkest fantasies of the “savage” in the Western imagination, fantasies that have been used to justify harsh measures in the name of defending civilization.

One such measure is the ongoing detention of child refugees by the US government, a policy that marks certain bodies as unwelcome in the landscape. Cortez uses materials similar to those used by ICE and CBP officers, including the shining silver Mylar of the “space blanket” given to detainees. In Seventy-Six Point Cosmic Shield (2019), she weaves them into portable igloolike structures that sit close to the ground, large enough for two bodies to fit inside. Cortez, who emigrated from El Salvador in 1989, has spent years making work about migration with a futurist bent. This piece looks like a survivalist moon landing shelter.

This show has many poetic messes. In an interview on Marfa Public Radio, Palma Rodríguez explained that there is no word for “garbage” in Nahuatl, an Indigenous language spoken in Central Mexico. By pointing out this linguistic difference, Palma Rodríguez implicitly advocates reorienting our relationship to objects thought of as trash, and suggests that when we do so, our habit of treating certain people as expendable and unwanted might shift as well. By animating everyday objects through motors and sensors, Rodríguez imbues them with personality and provokes empathy. Cortez also gives castaway materials a second life, using car hood sections to make another one of her dome structures that sit in the courtyard, One Hundred and Four Point Hood Shield (2019). The use of car parts directly references the sculptures of John Chamberlain, many of which are permanently displayed just down the street. “It is grandiloquent, proliferating exhaust pipes, rods and billows of metal, exceedingly keen on remaining junk, and proud to be confused with an ordinary wreck,” writes Donald Judd on Chamberlain’s work in a 1960 issue of Arts magazine. It was Judd who brought Chamberlain’s work to its permanent home in Marfa. And while Judd may have put Marfa on the map as an art town, it has a longer history as a border town. Established in 1924, the Marfa border patrol office has jurisdiction of 4,500 square miles. The Marfa and Presidio County Museum displays a 1930s guide on “How to Catch a Smuggler,” with staged photos depicting officers on the Rio Grande riverbank arresting people crossing from the Mexico.

Cortez, Lin, and Palma Rodríguez have disparate practices, but the works shown at Ballroom reveal a preference for recycled and foraged materials. The ways they use these materials suggest that they are less inspired by the beauty of the landscape than they are critical of the systems and stances that regulate it. Unlike the work of Judd and many of his compatriots, the pieces in this exhibition neither frame nor are framed by the landscape. They use elements of the landscape, both natural and constructed, in order to interrupt its perceived order. Art can only do so much when it comes to urgent humanitarian and environmental crises; often it does nothing at all. These works operate through disorientation, although it remains to be seen if they can truly shift assumptions toward the people and things that surround us. As I write this, a much larger interruption of the landscape is taking place: Tents are being erected just a few hours from Marfa to contain detained families. In her aforementioned book, Luiselli writes what she really wanted to say to the border patrol officer who, after learning her occupation as a writer, asked if it was inspiration she sought in her travels: “No, we do not find inspiration here, but we find a country that is as beautiful as it is broken, and we are somehow now part of it, so we are also broken with it . . . and are trying to figure out how to do something about all that.”

After 210 Years in Business, London’s Claridge’s Hotel Has Opened Its First Spa