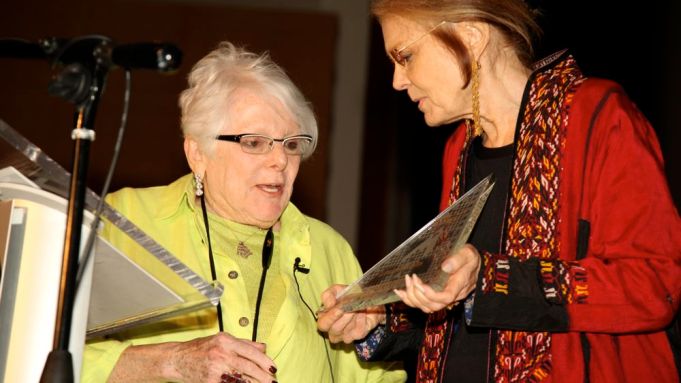 War on Women? Fuggetaboutit! Eminent women were honored in two separate ceremonies at the Brooklyn Museum on Wednesday, and women artists, exclusively, were selected to decorate tables at the second annual Brooklyn Artist’s Ball, which rollicked the evening. The events marked the fifth anniversary of the museum’s Sackler Center for Feminist art, where the feminist ur-table, Judy Chicago’s Dinner Party, is permanently installed.

Beginning at 8 p.m., guests filed upstairs to the fourth floor, where 18 tables were bedecked with all manner of designs by Brooklyn-based artists. Apparently the art was for sale; Elizabeth Williams, my neighbor at dinner who is a member of the Sackler board, was eyeballing a colorful sculpted head at the other end by our table’s artist, Saya Woolfalk, who explained the work was about “the ritual transformation of people from one form into another,” and ticked off her own hybridity: “black, white and Japanese.” Dancers wandering around the edges “activated the sculpture,” she said.

A.i.A. caught up with a number of the participants to ask what they had in mind. I began with the curator.

HIRSCH Do you have a favorite table?

TSAI But I do. They’re all very different.

HIRSCH How do you choose the people for this?

TSAI We have a little brainstorming session. This year it was women artists, all of whom live and work in Brooklyn.

HIRSCH Did you decide on this idea of decorated tables originally because of July Chicago’s Dinner Party?

HIRSCH I’ve talked to a bunch of the artists, and so many of them are having shows coming up. Did you know that when you chose them?

TSAI No. I think it’s a tribute to our clairvoyance. Amanda Schneider, Catherine Morris—we all brainstormed about it. I can’t take credit for masterminding something like this, though I’d like to.

PEPE The table is called Fancy Balls for Girls. It’s a hand-crocheted gold lace overlay that borrows the design from the floor of the Dinner Party. At the center are various little vases, tschochkes, I’ve picked up all around. Some of them I made, some were my grandmother’s. The idea is to bring the attributes of the Dinner Party back into domestic space, with the message that all the girls have a seat at the table.

HIRSCH Was this another one of your ridiculously labor-intensive efforts?

PEPE Even though it’s very open lace, it’s all made out of singular strands of thread. And each napkin is hand-crocheted with a trim of lace. Yeah, it was labor-intensive.

PEPE I’ve worked at Pratt for the past ten years. And I live in Brooklyn with Carrie Moyer, living and working in the same space.

ARNOLD LEHMAN, DIRECTOR OF THE MUSEUM, PASSES BY.

HIRSCH Arnold Lehman, what do you have to say about Sheila Pepe’s table?

LEHMAN It’s brilliant, and elegant, and a table I’d always like to sit at.

LASER So for my centerpieces I have eight melon halves with cow’s horns sticking out of them. At a certain point near the beginning of my meal…

HIRSCH This won’t ruin my shirt will it?

LASER Probably not. I’m working with two performers who will offer an extra beverage to everyone at the beginning of the dinner. And the horns are actually drinking horns, so they’ll pluck out the horns and offer everyone at the table some mead, and talk to them a little bit about the meaning of mead.

LASER Yes, a bit medieval, but mixed with the lingo of the sommelier.

HIRSCH It’s loud in here. Did you say “a summer yay?“

LASER No—a sommelier! They’ll be alternately acting like typical waiters and talking about the meaning of mead and the significance of honey and wine as markers of man’s passage from nature into culture.

HIRSCH And the passage of man from the earth, since all the bees are dying.

LASER Good point! But the wine is honey wine and the melons are honeydew.

McLEOD Mmm hmm, I live in Fort Greene. It’s a series of sculptures parading down the center of this four-foot-wide, 40-foot-long table. I wanted to make a festive conversation-starter. I couldn’t incorporate food, because my work is very abstract. It just didn’t make sense. Each piece leads to the next, and there’s spilled paint that leaks down onto the planks of the table. They’re made of small, immediate materials-wood, painted foam, stuff like that.

HIRSCH Were you thinking of Brooklyn, or conviviality?

McLEOD Well—more about conviviality, though I have to say when I go to my studio, I pass a construction site where they’re putting up new condos. That’s where I pick up a lot of my materials.

McLEOD [laughs] Yes, it is.

HIRSCH Tell me about your table.

FRANK It’s called The Nine. They are nine painted portraits, 22 by 26 inches. And while they’re women, they’re somewhere between genders and sexualities, and somewhere in between human and monster. They’ll be in my show Oct. 4 at Fredericks & Freiser in New York.

HIRSCH Get that plug in!

FRANK But I made them expressly for the table. So it’s 40 feet of speed rail pipes with chrome fittings and the paintings sit about at eye level. On the backs are acrylic mirrors, and they spin 360 degrees, in a natural wood frame. So they alternate between the portrait and the diner’s reflection. I was reading Borges, about mirrors and fornication. Both are awful, because they multiply the numbers of men in the world.

HIRSCH Were you thinking of the Dinner Party?

HIRSCH Isn’t that a bit of a buzz kill?

FRANK No. They are provocative, but also kind of wild and fun.

KU My table is an army of hollow paper tigers. I happened to have a residency at the Lower East Side Printshop, which was fortuitous, because I’m a 2-D-er. They invited me to do this, and while I said yes of course, I then thought oh my God, what am I going to do? So I thought about it, and decided to use that residency. I printed out a template-I thought for a hundred, but actually there were only 54 that fit.

KU No, I actually glued them together. Seven parts per paper tiger.

HIRSCH Why the tiger?

KU It’s a project I’ve been toying with in my mind for some time. I was born the year of the tiger. I’m an immigrant—a double immigrant. I’m Chinese, but I was born in Taiwan. The “double immigrants” of the forty-niner generation. When we moved to the States I lived in Oklahoma, Texas, Colorado-places with few other persons of color. When you’re born the year of the tiger, people will say, Oh, you’re such a tiger. But when my mother was mad at me she would say I was a paper tiger, meaning not very ferocious.

HIRSCH An insult, but kind of affectionate.

KU Yes, it’s not a very mean insult. There are worse things you could call someone.

HIRSCH I live in Ditmas Park. I hear you live in my neighborhood.

HIRSCH Tell me about your table.

GANESH I called it the Table of Earthly Delights, because I wanted it to reference the lushness of the Garden of Earthly Delights, and Bosch of course. It involves cartoonish, fractured body parts. I like to mix materials, so there’s Easter basket grass, plaster, glass, vinyl, marbles. And a pair of statuesque mannequin legs covered in hair.

TSCHAPE Three silicone octopus creatures lie on my table, and a couple of little eggs. It was inspired by the filmmaker Jean Painlevé who did the first underwater films. There was one about the love life of the octopus.

HIRSCH You were already thinking about him before the Ball came up.

TSCHAPE A lot of my work has to do with underwater. And a lot is filmed underwater. My octopi are sort of monster-like. There are three of them, and the eggs are hatching. They’re not really a table setting because they’re big, individual sculptures, really. They just look awesome on the table.

TSCHAPE I live in Williamsburg, and have a studio in Bed-Stuy.

HIRSCH How do you get back and forth?

TSCHAPE Summer bike, winter car. And my daughter goes to school in Manhattan.

HIRSCH Oh dear, that’s a lot. So this may well be the last piece you ever make.

HIRSCH You made a table.

SOARES It’s a drunken table. It’s made of old glasses that belonged to people over time, from the Baroque era to the 50s. They’re all in the center of the table, like the end of a party-you know, like when you have leftovers. They are somewhat filled with alcohol. Tequila, whiskey, champagne.

HIRSCH Does this have to do with your work in general?

SOARES Yes. I’ve done a lot of work that has to do with collections and the memories that come with these collections. This one is called Finale, and it sits on top of this Mylar, so it reflects, but not perfectly-so it’s a little drunk.

LOPEZ Someone actually asked me if I my sculpture was going to be electrified, and I had to assure them that I did not intend to send high voltage through all the diners tonight. It’s one long landscape, so that the table becomes an industrial world that turns into a bramble of cords, and fencing. There’s construction fencing from one end to the other, and marching along are mutant power towers-like the ones that carry electric lines. These are made out of laser-cut steel. Some are realistic, but some are fantastic-with appendages coming out of all sides. So it’s a plausible industrial landscape, with something a little bit off. The scale is all wrong, and they are somewhat Frankensteinian.

HIRSCH Formally, it really works, from one end to the other.

LOPEZ It was really fun to install. I teach, so I was one of the last ones. It was fun to come in and see everything else installed. It’s just a very different format-but really just one piece that happens to be 50 feet long. And there are parameters. You have to leave room for the plates. It’s just a different set of problems, like always.

They Are Wearing: Frieze Frame