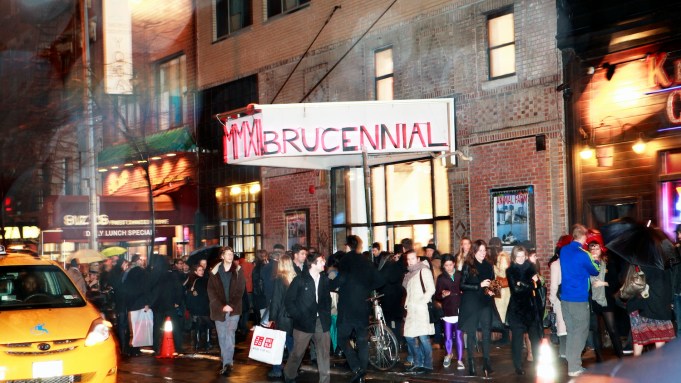 The Brucennial 2012, billed with some measure of self-effacement as “the single most important art exhibition in the history of the world,” opened big last week, with visitors standing in light rain for up to 2 hours to get into the show’s beer-fueled launch party at 159 Bleecker Street in the West Village. On view through Apr. 20, the freewheeling salon-style survey features works by nearly 400 artists, solicited by the quasi-anonymous group Bruce High Quality Foundation with backing from their dealer, Vito Schnabel.

Over the weekend, the Brucennial was further enlivened by four performances of an amateur musical (complete with robes, masks, recorded music and live singing) titled Animal Farm. Though it bore little resemblance to George Orwell’s classic fable, the piece did tell an allegorical tale: namely, how mismanagement by the Chicken Trustees of Bruce High Quality Foundation University jeopardized 150 years of no-tuition policy at the noted art school—a crisis that the loyal alums, aka Piggy Artists, now strive to rectify. BHQF’s core members, in case you couldn’t guess, are all graduates of New York’s venerable Cooper Union, now mired in a similar dilemma.