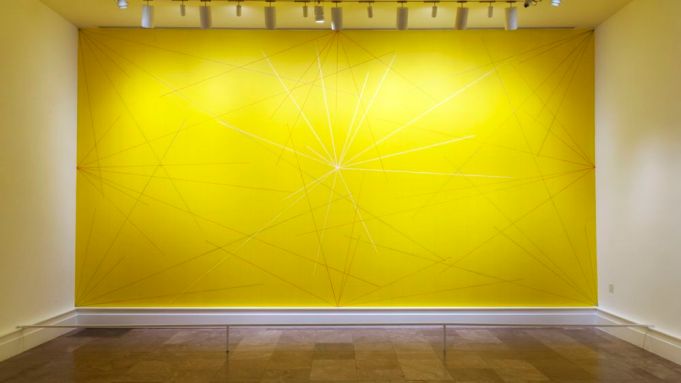 When—as a Halloween prank—the painter Charles Clough installed a bright orange masonite arrow on the façade of the venerable Albright-Knox Art Gallery in Buffalo, just below the neoclassical caryatids, it represented, he says, “my guerilla action, my debut act as an artist in public.” The intervention lasted only one night in 1972 before the museum removed it. Now the arrow’s returned to the museum like a boomerang. A huge exhibition, “Wish You Were Here: The Buffalo Avant-Garde in the 1970s” [through July 8], documents a decade in which the city played a seminal role in the development of contemporary art.

The show aims to fill a blank in art history and describe the area’s artistic Golden Age. Cindy Sherman, Robert Longo, Vito Acconci and Bruce Nauman were all there. “People don’t know Buffalo was a major nexus of liberal activity,” says the exhibition’s curator Heather Pesanti. As she conducted 60 interviews, the survey “became a tumbling, gigantic thing,” a cascade of artists, disciplines and discoveries.

Pesanti dedicates a gallery to each hotbed in the Buffalo area. The University of Buffalo was one such hub. Flooded with funding by then-governor Nelson Rockefeller (determined to make it “the Berkeley of the East”), the school assembled a dream-team faculty, including Robert Creeley, John Barth, Charles Olson and Leslie Fiedler, and trailblazing poetry, fiction, criticism, and exciting ideas poured out. UB’s Center for Media Studies included Hollis Frampton, Paul Sharits, Steina and Woody Vasulka and Tony Conrad, who collectively pioneered experimental film and digital video as forms of abstract art.

Perusing the massive (more than 300 objects) exhibition is like a 3-D stroll through recent art history. One experimental practice that’s now mainstream was the use of inter-disciplinary, hybridized forms, methods, materials and mediums. For example, Sharits’s Dream Displacement (commissioned in 1976 by the Albright and reinstalled for the show) was one of the first immersive filmic environments, merging film, abstract imagery, an audio track of breaking glass, and sculpture (four projectors on pedestals casting moving bands of color on the wall).

Another local innovation was participatory art, encouraged at Artpark, a public park backed by Governor Rockefeller and inspired by the work of land artist Robert Smithson. Opened in 1974 on 172 acres abutting the Niagara River gorge, it was designed as a multi-media, multi-disciplinary festival site for a stream of artists-in residence-that included Lynda Benglis and Martin Puryear.

At Artpark, artists made populist, post-minimal sculptures, landscape interventions and site-specific work like Gordon Matta-Clark’s legendary Bingo (1974), prompted by the increasing demolition of buildings in urban centers. Cutting off the façade of a house near Love Canal and reassembling the central section, Matta-Clark invited dialogue on urban renewal issues, believing art should be a social force.

Also influential was the Center for Exploratory and Perceptual Arts (CEPA), a catalyst for transforming the role of photography during the period. An experimental, artist-run center, CEPA hosted Cindy Sherman’s first solo show (1975). In 1976, the center began its “Metro Bus Show” series by commissioning Sherman, Ellen Carey and Bruce Jackson to display photographs on local buses. One black-and-white self-portrait by Carey shows her head surrounded by a halo of Jackson Pollock-like white splatters, created using a long exposure and a light pen. Sherman’s 1976 “Untitled (Bus Riders)” self-portraits depict her in sundry costumes: an old lady with a cane, a schoolgirl, a worker in a hard hat. Bruce Jackson’s 1975 photos made at an Arkansas prison farm show inmates picking cotton under the baleful eye of a guard straight out of Cool Hand Luke (sunglasses, paunch, cowboy hat) and another of a convict glaring fiercely at the camera.

The music scene was equally progressive, with luminaries like avant-garde composer Lukas Foss directing the Buffalo Philharmonic Orchestra (followed by Michael Tilson Thomas), John Cage and Merce Cunningham making regular appearances, and atonal composer Morton Feldman serving as a professor at UB. In this jam-band, anarchic era of risk-taking, the Grateful Dead played “Not Fade Away” with the Buffalo Philharmonic.

At the forefront of the visual arts was the symbiosis between the Albright-Knox and Hallwalls, an alternative art space founded in 1975 by Clough and Robert Longo. The same year, the Albright-Knox hired Linda Cathcart as curator of contemporary art, with an explicit mandate to present radically new art “hot off the presses,” she says.

Cathcart (whom Longo called his “muse”) became close friends with the Hallwalls gang (including Cindy Sherman, Michael Zwack, Diane Bertolo and Nancy Dwyer) and introduced them to up-and-coming artists whose work she showed at their request. “They shouted out loud what they craved and wanted to see,” says Cathcart, who left in 1979 and now directs Casa Dolores, a center for Mexican popular art in Santa Barbara. The Albright-Knox section of the show is packed with artists who later became important, like Bruce Nauman, Gilbert and George, Ed Ruscha, Hannah Wilke, and Jackie Winsor.

Hallwalls, located in a former ice-packing warehouse and operating on a tiny budget supplied by grants from the New York State Council for the Arts and the NEA, was a “light-weight, streamlined institution without bureaucracy,” Clough says. The organizers invited visiting artists like Robert Irwin, Vito Acconci, Chris Burden, Richard Serra and Jonathan Borofsky. The goal, according to Clough, was “to hang out with the heroes, pick their brains, and establish an import-export” model. Hallwalls brought artists from the West coast, New York and Europe, enabling Buffalo artists to make connections and gain visibility for their own work in urban centers.

Hallwalls, one of the first alternative, multi-disciplinary sites, hosted concerts, readings, films, performances and exhibitions. Similar venues—like A Space in Toronto, CalArts in Los Angeles, and Artists Space, The Kitchen, and White Columns in New York—also departed from the white-cube model, encouraging new forms of art.

The major force driving Buffalo’s artistic flowering was a communal spirit of collaboration and cross-pollination of mediums. “The magic of the people was essential,” Clough recalls. “With collaboration, the more the better: win-win-win.”

Collaboration was also practical, since the fledgling organizations couldn’t attract big names without sharing resources. And distance from distractions of a big city was a factor. As Longo told Pesanti, “There was nothing interesting there except to make your own stuff.”

Although Pesanti’s exhibition surveys multiple disciplines, it was the rise of fine art photography that stands out as a major contribution. “Photography became almost aggressively omnipresent,” at this time, Pesanti notes, “weaseling its way into all the other media.”

The gallery devoted to Cindy Sherman’s first solo show at Hallwalls, an installation called “A Play of Selves” in 1976, predicts her subsequent career as a fictive player in staged mise-en-scènes. On four walls are pasted 245 cutout photos of Sherman in various disguises, playing roles like “Frivolous Young Woman,” “Agony” and “Desire.” Grouped into 72 arrangements, the images constitute a four-act play that features Sherman posed as men, women and allegorical figures, employing makeup, masks, costumes, and gestures.

Robert Longo conceived his first “Men in the Cities” graphite drawings based on photos he made of twisting, falling figures in 1976. “Robert Longo—for God’s sake, you can’t hold him down!” says Anthony Bannon, director of Buffalo’s Burchfield Penney Art Center, who was a filmmaker and critic for the Buffalo News in the ’70s. Bannon describes Longo as “a film director who plays in a band, a printmaker, and a performance artist who works in paint and graphite.”

In the 1970s, Buffalo’s foundries and steel mills were closing, but a scrappy new era of esthetic experimentation was opening. A confluence of people, politics and patronage produced this cascade of creativity, in which the seeds of new mediums and new ways of producing and displaying art were planted and germinated.

“The art world is the most Darwinian place there is,” says Clough, adding, “If the work lasts 40 years, there’s some kind of power there to keep it going.”