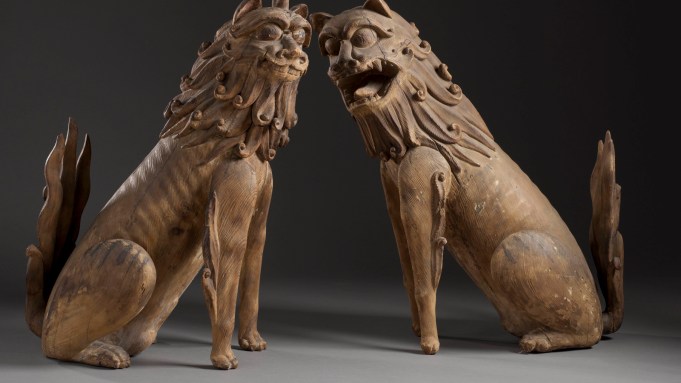 A waist-high, 3,300-pound lavender cylinder artist Roni Horn made of solid glass was the first artwork that members of the collectors committee of the Los Angeles County Museum of Art (LACMA) saw when they arrived at the museum’s Resnick Pavilion last Saturday morning. When you look at the work from above, through its clear and smooth top surface, the space inside looks deceptively deep.

This was the newest and most expensive of the nine works the committee would consider purchasing for the museum after curators from nine departments made spirited pitches for their proposed artworks. Committee members would then use their pooled membership fees, ranging from $15,000 to $60,000 per couple, and additional funds raised during a Saturday evening auction, to acquire their top picks, which they voted on over dinner. Eighty-seven couples participated this year, 23 of them new members, which put the pre-auction pool at $1.15 million.

“This art is incredibly immediate,” LACMA associate curator Jarrett Gregory told A.i.A., speaking about the Horn work, which she was proposing. Her department, contemporary art, has learned that it works best at these annual events to present art with a quick, sensory appeal. The facts that LACMA owns nothing by Horn, and that no museum further west than the Art Institute of Chicago owns any of her glass pieces, can come later.

This gut first, intellect second approach is one curators across the board adopt during presentations. Talking up his ninth-century Japanese guardian lions, curator Rob Singer, who has had his proposed work acquired all but one year since 1988, started by describing the lions’ personalities. “Think of the one on the right as the younger brother, and the one on the left being like, ‘Oh my lord, he’s trying to take over again,'” he said. Only then did he discuss the rarity of the nutmeg-yew tree wood the animals had been carved from and the 19th-century suppression of Buddhism that probably led to their long disappearance from public view.

LACMA’s collectors committee was formed in 1986, largely because the young museum, established in 1961, had no acquisitions endowment. Then-director Earl A. Powell had previously worked at the National Gallery of Art in Washington, D.C., where that museum’s director, J. Carter Brown, had established a similar program because federal funds paid for operations but not art. Other institutions, like New York’s Guggenheim Museum, have comparable committees. But, says LACMA director Michael Govan, at events like this elsewhere, “you normally sit in a boardroom.”

Before Govan arrived in 2006, the committee’s gathering was a one-day affair, with curator presentations often taking place in an auditorium. The committee had begun having difficulty affording the works curators presented, problematic since the event accounts for 20 percent of the museum’s acquisitions budget. “The price of art was going up so fast,” Govan explained. “Ann [Colgin, a museum trustee] came to me and said she wanted to do something to grow the list, grow the event.”

Since 2009, when Colgin, who owns Napa Valley winery Colgin Cellars, became chair, the event has included Friday evening cocktail parties and dinners by established chefs at trustees’ homes, and the auction during the Saturday night dinner. Auctioneer Viveca Paulin-Ferrell (wife of actor Will Ferrell) runs the sale, and members bid on donated offerings like private concerts by Carole King or jet trips to wineries. These new perks have had the desired effect, increasing membership rolls and thus bolstering acquisition funds.

But even with the increased funds, it’s still a delicate dance, choosing what to present and then strategizing about how to frame it. Curators can be refreshingly frank about the process’s complications. Ilene Susan Fort, senior curator of American art, told A.i.A. that, in the past, members have hesitated to spend too much on something that came from “their own backyard,” though they willingly spend on European art. This year, she proposed Brooklyn-based Nancy Grossman’s No Name (1968), a wooden head in a menacing leather mask with its mouth sewn shut, at a relatively affordable $125,000. “There is no sculpture by Grossman in a SoCal collection,” said Fort. “That’s pretty appalling. We don’t even have a drawing.” At the end of her presentation Saturday, she asked the committee to “help rectify the situation.”

Especially now that Friday dinners have been instituted, curators begin campaigning before committee members have even seen the art. Sometimes, trustees or more active donors won’t wait for the voting session and will buy work for the museum outright.

This year, by the time curator presentations began on Saturday, film and television producer and New York Giants co-owner Steve Tisch, who had sat beside Jarrett Gregory at dinner Friday, had already offered to pay for one-third of the $950,000 for Horn’s sculpture, Untitled (“The sensation of satisfaction at having outstared a baby.”), 2013. Real estate lawyer Dennis Roach had pledged $40,800 to buy British-Iranian artist Mitra Tabrizian’s photograph Tehran 2006 (2006), a panorama of listless Iranians in an empty lot below a billboard showing revolutionary leader Khomeini and Khamenei. Islamic art curator Linda Komaroff had proposed this.

By noon, trustee Kelvin Davis had purchased Antonio de Torres’s lushly ornate painting of the Virgin Mary appearing to Saint Juan Diego, Virgin of Guadalupe (1725), proposed by Latin American art curator Ilona Katzew. This mean that, in addition to the $633,000 still needed for Horn’s sculpture, six works remained: the Grossman sculpture; Picasso’s aquatint print Bull and Picador (1952); a small 1830 version of the Odalisque by Jean-Auguste Dominique Ingres; an 1896 poster of an androgynous figure with branches in place of arms by Charles Rennie Mackintosh; Singer’s lions; and Feng Mengbo’s video Long March: Restart (2008), proposed by Chinese art curator Christina Yu. All together, these would cost $2.95 million.

The auction that night began right after the first course and raised $800,000, a sum that bumped the pool up to $1.95 million.

Voting started between the second and third courses. Small electronic devices fed members’ votes directly to a group of number-crunching LACMA employees sitting in the back of the room. Every round, the two works with the most votes would go head-to-head in a run-off, a process meant to continue until money ran out. Trustee Lynda Resnick manned the microphone, reminding committee members that at any point in the evening, anyone could jump in and buy something for the museum. “Art is elevated and so is LACMA,” she said. Horn’s untitled work beat out the guardian lions in round one. In round two, the Ingres painting outdid the lions, which had gone back into the running after losing to Horn, and, in round three, Picasso won over Mackintosh.

After that, proceedings got messy. Christina Yu got up to fight for Feng Mengbo’s video, mentioning to Govan that her birthday was coming up. Now that the pool had gotten too low to pay for his lions, Singer came to the front of the room and huddled with trustees. Soon, philanthropists Jane and Marc Nathanson’s table had pledged $40,000 toward Mengbo’s work, and Lynda and Stewart Resnick had bought the Grossman sculpture for the museum, then purchased the lions as a promised gift. By dessert, all nine artworks, worth just shy of $3.5 million, had been acquired, making it the first time since 2007 the committee had bought everything proposed.

Another work had been purchased, too: Govan announced that evening that a trustee, songwriter Carole Bayer Sager, had bought an installation of acrylic pillars by lesser-known Light and Space artist Helen Pashgian (on view at the museum through June 29). Sager had hoped making the announcement over dinner would encourage generosity.

“I do seem to pop in when things are needed,” Sager told A.i.A. “I’ve always been of the belief that without art and music we’d all be walking around soulless.”