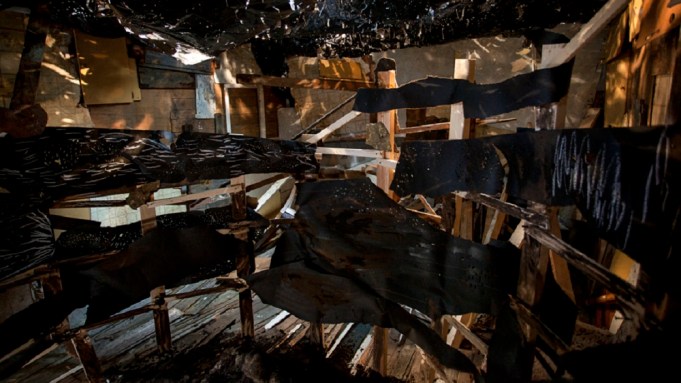 It was a simple e-mail miscommunication that landed me in Michelle Grabner’s backyard on a Thursday afternoon instead of Saturday, tugging on a locked doorknob. Grabner, an artist, painting professor and 2014 Whitney Biennial co-curator, operates the Suburban with her husband, artist Brad Killam, in two outbuildings in their home’s yard, in the Chicago nearby suburb of Oak Park, a 15-minute walk from one of Ernest Hemingway’s old homes.

I had came out to see the collages of L.A.-based artist Julie Weitz. I knocked on the back porch of Grabner’s home. Grabner, arms crossed over a bathrobe, peeked her head out with a smiling hello, and Killam came out to show me the art.

Can I Come Over to Your House? is the title of a self-published 2010 book commemorating 10 years of exhibitions at the Suburban, and the question seemed to linger in the air. I viewed Weitz’s collages in solitary quiet in the small galleries. Weitz had drawn a sacred geometry with some grotesque details on photos of posing yogis. As images, they made a strong case for a united Eastern and Western tradition of abstraction.

Some of the best new art sits behind locked doors in Chicago; you have to request an appointment to see it. The city’s boom of independent, artist-run art spaces in the last two decades means more and diverse exhibition opportunities for artists and curators. These artist-run galleries tend to dwell in Chicago’s artist-run homes, in the neighborhoods and suburbs, out of sight of the city’s gallery districts. Although some occasionally host fundraisers, these private art spaces don’t or can’t sell artwork. Three years ago the city shut down an apartment gallery because the rental was not zoned for commerce. Although these venues mimic commercial galleries in many ways—maintaining professional websites, inviting the press, cultivating fanboys—no gallery attendant keeps watch over a front desk, so they don’t maintain normal business hours.

But they do have great openings. Usually at picnic hour on a Sunday or dinner-party hour on Saturday evening—there is always food—art spectators gather and mingle in the yard or the hallway or the kitchen, within easy reach of the bucket of beer. If it’s a sunny Sunday at the Suburban, Grabner may be perched atop a stack of bleachers in her yard, surrounded by collectors and art students. It’s like the calmest tailgate party you ever attended. Weitz’s opening reception in late January coincided with an ice storm. Dozens of people showed up, the artist told A.i.A., and “Michelle and Brad invited everyone into their house and it felt like a warm gathering of friends.”

Less than a mile from the Suburban is the home of another artist and art professor, Sabina Ott. She runs Terrain on her front porch and stoop, those informal community gathering places. Terrain’s exhibitions are visually accessible from the sidewalk 24 hours a day, but friends and viewers meet during the opening receptions for chitchat. Ott is planning a biennial exhibition. It will be a first for the suburb.

Scattershot across the broad city of Chicago are a handful or more of underground art openings on a given evening. Often it is necessary to call back for a private viewing. All of the spaces welcome it. You make an appointment and then find yourself standing in someone’s home, alone, looking at art in a living room. The furniture and scraps of daily life have been cleared away to let the white cube in. A wall hook dangles a checklist and a gallery map of the one-bedroom apartment. There is a video installation in the closet. Queer Thoughts is an apartment gallery in Pilsen, on Chicago’s Near South Side, a neighborhood where many young artists live. The third-floor walkup is the home of Luis Miguel Bendaña and is co-run with his boyfriend, Sam Lipp. They are both artists. Bendaña and Lipp invite visitors to their domestic gallery during public receptions and by appointment, as their work schedules allow for it. (They hold day jobs in an art gallery and an opera house, respectively.) Next door to Queer Thoughts is one of my favorite panaderias in the city.

Queer Thoughts does not exclusively show queer artists. Here, queer means good-weird, or surreal. Many things get better when queered. “We use ‘post-identity’ as an intentionally nebulous and perhaps contradictory term in hopes to complicate and add complexity to the dialogues surrounding identity politics today,” said Lipp. A beet-red dog statue by Chloe Seibert, bulky as a Saint Bernard in a downward-dog pose, filled most of a side room in the apartment-turned-gallery. This spring, QT (as they are known) hosted artworks by Kaoru Arima, from Inuyama, Japan, for his first U.S. solo show.

At a domestic art gallery you don’t just pop in for a quick peek. Now you are a guest-maybe you should have brought cookies or a bottle of wine-and your appointment nearly guarantees a friendly chat with the keeper of the homestead. You are in his garden, and he is a soft-spoken art collector of Kerry James Marshall, William Pope.L, Rashid Johnson and hundreds of other artists you admire. Daniel Berger tends to keep his private art collection separate from the semi-public art gallery he runs behind his home, appropriately named Iceberg Projects because of its location on the northernmost edge of Chicago’s city limit. A small team of artists oversees the programming there.

Berger’s carriage house got a full architectural renovation a few years back, with skylight, heated copper flooring, a projection screen and pristine walls. But the current exhibition jam-packs the gallery and cloaks its tasteful interior finishes with an immersive installation of salvaged materials assembled by Abigail DeVille. The rubbish is sourced from a nearby apartment-building demolition. DeVille, from New York, has built a full-scale squat inside the gallery with this detritus, on the floor, ceiling and walls, as a small animal might forge its hidey-hole.

Visiting alone, by calling ahead, will heighten the drama within DeVille’s haunted house-its centerpiece is a lifelike composted corpse-and the quiet residential context will evoke a death den in this city that breeds serial killers. It was a chilly day for a backyard opening, but the outdoor fireplace was on at Iceberg Projects. Everyone crowded into the installation for an artist talk. Whatever assumptions one may have about hyper-local art venues, these small, neighborhood venues are attractive to artists. The power of DeVille’s artwork, which owed partly to its intimate venue, proved it.