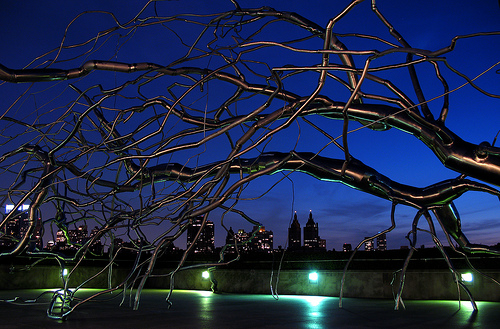 In Week in Art, Art in America peeks through the lenses of Flickr photographers from around the world.

Above: Roxy Payne’s Maelstrom on the roof of the Metropolitan Museum of Art, at night.  Posted by Flickr photographer galvarez51 on May 6, 2009.

Above left:  Note the references to Haring, Basquiat, and a Dutch master or two in this New York mural. Posted by Flickr photographer Sabeth 718 on May 10, 2009. Right:  An installation shot from La Force de l’Art at the Grand Palais, in Paris through June 1st. Image courtesy Flickr photographer dalbera on May 2, 2009.

Above: The remnants of a recent opening at Chaim & Read. Image by Flickr photographer j-No on May 16, 2009.

Above: Yayoi Kusama’s installation at Gagosian Gallery remains on view through June 27th 2009; another Kusama installation opens at the gallery’s Beverly Hills location on May 30th. Image courtesy Flickr photographer EssG on May 17, 2009.

Thoughts on Captured This Week? Leave them in the comments below!