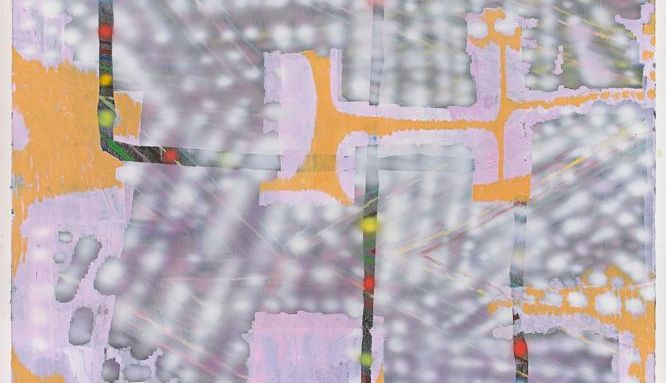 For painter (and alum, class of 1967) Carroll Dunham, Phillips Academy Andover’s production of all-star artists, among them Frank Stella, Peter Halley and Carl Andre, is not merely written in the stars. Generations of accomplished artists might remember the school’s Addison Gallery of American Art, which was the first American museum to show Josef Albers and boasts a permanent collection of important works by American artists ranging from Sargent and Whistler to Pollock. In recent years, the museum and has hosted exhibitions by Kara Walker, Alex Katz and William Wegman—to name a few.

“It’s more surprising to me that George Bush went to Andover than Frank Stella,” Dunham laughs, in conversation with A.i.A. “You don’t expect a school like that to produce someone like him.”

In an atypical form of contribution to his alma mater, Dunham has curated an exhibition, “Open Windows,” featuring work by of four artists. Here, we speak to him about the nature of the show, God and painting.

AIMEE WALLESTON  Your show features paintings from four contemporary artists—Keltie Ferris, Jackie Saccoccio, Billy Sullivan and Alexi Worth—alongside works from the Addison collection. The painters you chose are of fairly different orientations: Keltie is completely abstract; Billy Sullivan is figurative. Also, generationally, there is a wide range between them. How did you make this selection?

CARROLL DUNHAM I had four rooms, and I wanted the exhibition to be very diverse. If I had six rooms, I would have made it even more diverse. As I go along in life, I tend to be interested in a wider range of positions, in terms of what I’m willing to look at and think about. That thinking has affected my own approach to painting. Here, there’s no artist who takes a particularly ironic attitude, for example, and there’s no artist who is overtly dealing with identity or political issues. This is more about the idea that painting is something individuals just do.

WALLESTON Why did you title the show “Open Windows”?

DUNHAM It’s a pretty dumb title, really. I needed to come up with a name. I kept thinking about an open-ended approach, where one didn’t come away thinking: “Oh, well, Carroll Dunham is arguing for this approach to contemporary painting in 2012.” I like windows as a metaphor, as one of the ways you can think about what paintings are. And I thought about the show as a real view of the activities of each of these artists; there’s enough material so that you really could look at what they were doing. It’s not quite as large as an exhibition at a New York gallery would be, but almost. “Open Windows”: it sounded kind of nice, it didn’t annoy me, so I just kind of went with it.

WALLESTON In the cases of Keltie and Alexi, the work seems to be about perspective. And your work also strikes me as exploring a certain perspective, one that serves as the visual logic behind the painting.

DUNHAM When I came to painting, this was not a way in which anyone I was interested in talked about painting. Painting was being discussed almost entirely in terms of its object nature and flatness. So it represented a push against authority for me; it made looking at the painting part of the content of the painting.

With Alexi, his work really comes out of the tradition of representational painting. He is interested in these head-twisting, spatial puzzles. Keltie’s paintings are very different in feeling from Jackie Saccoccio’s paintings. It’s hard to put into words why that’s the case. Something to do with the difference between spraying paint, as Keltie does, and pouring paint around. Jackie’s paintings feel much more physical and much more on the surface and Keltie’s feel much more spatially located. Obviously Billy Sullivan is painting from photographs: that’s a whole other thing. You’d think that would embody a lot of space but in a way his paintings are very flat and on the surface, so there’s a paradox. Billy’s paintings are the most windowlike in the way that they frame life.

WALLESTON Do you remember when you first encountered each of these artists’ work?

DUNHAM Keltie was a student at Yale when I taught there. I thought she was a very interesting person and a very promising artist. And Billy Sullivan is an old friend of mine. I’ve known him for 30 years and been very aware of his work and following it along. The most interesting thing about Billy is that when I first knew him, he didn’t really make paintings. He made big pastels. There was a migration into painting that took place over time. Jackie and I have known each other quite a long time also. She used to be in a studio with someone I was friendly with, and she called me and asked me if I would look at her paintings. I liked what she was doing, so I was always kind of aware of it, and we’ve gotten friendlier as we’ve gotten older.

I was initially made aware of Alexi when I was on a jury for something he was applying for. I saw his paintings in a slideshow and I hated them. They weren’t my thing at all. But my case was much more rigid back then, and his work was a bit different too. We actually met each other because we are both interested in writing. We met at some event in the art world and got to talking about being an artist and trying to write. I liked him a lot and I asked him if he would interview me for a catalogue that a gallery was doing for an exhibition of mine. I started really looking at his paintings again, which I hadn’t seen in a while, and saw them in a completely different way.

WALLESTON You’ve written an essay establishing a theoretical link between the death of painting and the existence of God, and the in-between of that. Almost every modern philosopher has made an ontological argument or a moral argument for the death of God, but you bring up this idea of why people paint. And also why people continually desire to consider painting a “dead” art form, and then resurrect it-or come to terms with the fact that it will always be a valid art form.

DUNHAM I was just reading this morning about Rick Santorum ranting and raving about how terrible it is that there isn’t more religion in public life. As far as I can tell, Americans are having lots of sex, using birth control, not going to church terribly much, and taking a lot of Prozac. I’m not a “person of faith” in any normal sense, but one is certainly aware that secular materialism doesn’t leave you feeling all that comforted. Painting sort of does. Even very uncomfortable paintings. There’s something about the fact that it embodies a tradition and it has continuity with the past. It sort of asks to be part of a community. It’s a very interesting thing to me, painting, the way it functions socially. The fact is: you’d be hard pressed to find too much of it in any of these big festivals around the world, or the “performance biennial” that’s just descended upon us. Yet people really like painting when they find an individual case of it that interests them. I think you could argue that painting has driven the philosophical developments in art quite powerfully.