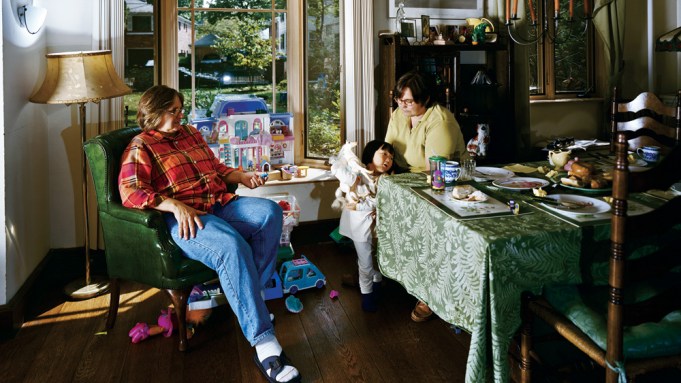 Catherine Opie’s current retrospective, on view at the Solomon R. Guggenheim Museum in New York, traces a specific documentary lineage for this midcareer artist. Her tightly conceived series are indebted to the Neue Sachlichkeit and its modern practitioners but even more firmly rooted in the history of socially concerned photography in America. Even the title, “Catherine Opie: American Photographer,” echoes that of an important precedent—“Walker Evans: American Photographs” (1938), the first-ever one-person exhibition of photography at the Museum of Modern Art and an encapsulation of Evans’s documentary esthetic. Opie came to the attention of the art world in the early 1990s with her gender-bending portraits of friends and performance artists in the S&M leather communities of San Francisco and Los Angeles. But if much of her subject matter has been quite unlike that of Evans, the present exhibition stakes out a fair amount of common ground for the two artists, most particularly their fascination with American subcultures—whether implied in architectural studies or directly seen in portraits—that have been disparaged or overlooked.

In some 15 disparate series, Opie’s exhibition claims for her a much broader designation than that of queer photographer. Those who follow her work have sometimes struggled to draw connections between the series—from huge (110-by-41-inch) color Polaroids of the pierced and tattooed performance artist Ron Athey to diminutive (2¼-by-6¾-inch) platinum prints of empty Los Angeles freeways. Installed along the curving walls and alcoves of the annex galleries of the museum, the exhibition weaves in and out of nearly two decades of Opie’s career, revealing a number of connecting threads. Each of the series on view is presented as a tight, discrete group in its own space, emphasizing Opie’s debt to the typological approaches of Bernd and Hilla Becher and August Sander. Especially significant throughout is the theme of “community”: not only how the term is defined for the purposes of group identity, but what it means to participate in, or to be excluded from, the larger American community.

For her first one-person exhibition, the 1991 “Being and Having” at Gallery 494 in New York, Opie showed 13 color portraits, close-ups of her friends’ faces sporting fake mustaches and beards. (Opie herself plays “Bo,” looking tough and serious. She thinks of the character, she has said, as “a serial killer from the Midwest who’s a used aluminum-siding salesman. 1 ) The unsmiling faces in this early series are tightly cropped and set against a mustard yellow background, and they look directly, fiercely, into the camera. The more active subjects in Opie’s subsequent “Portraits” series (1993-97), shot from farther away in three-quarter or full-figure poses, are livelier and more expressive. The cross-dressing Jerome Caja (1993), for example, photographed against a deep green ground, vamps in a bright red polka-dot dress, fluffy red slippers, oversize earrings and funky glasses. Opie cites Hans Holbein as an inspiration for the images’ saturated, single-hued backgrounds and stylized formality, visual conventions that confer dignity and authority on people whose self-presentation is anything but conventional. “There’s a seduction that happens,” Opie says. “I use all of the classical tropes of art. They allow people to enter the work, and to look at something they might not otherwise look at. 2

Visual seduction is operative in three self-portraits occupying a small alcove at the Guggenheim. Self-Portrait/Cutting (1993) borrows and upends the tradition of the female nude seen from behind: carved into the flesh of Opie’s back, and still weeping blood, is a stick-figure drawing of a house and two women holding hands. Opie, who had recently broken up with her partner, was longing at the time to start a family, and the image radiates all the painful contradictions inherent in that wish. Self-Portrait/Pervert (1994) is rougher still. Opie faces the camera, topless again, but with the word “pervert” cut into her chest in ornate letters. She wears a tight black leather hood, and 23 evenly spaced needles neatly pierce each arm. The rich black-and-gold tapestry backdrop and formality of the composition belie the fury behind this difficult self-portrait, which Opie has described as an anguished reaction to the AIDS epidemic, as well as a cry against the “normalizing” of gay and lesbian communities. (The S&M subculture was not welcome within the more mainstream lesbian community, Opie has observed, and her studio portraits and self-portraits were intended, in part, to expand the idea of lesbian identity. 3 ) Still, referring to Pervert, Opie admits, “It’s even chilling for me sometimes. It’s a tough piece.” In contrast to this is the tender 2004 portrait of Opie nursing her son, the word “pervert” still visible as a ghostly but permanent scar above him.

Opie tells how she was unprepared for the kind of negative attention she received from some quarters in response to Cutting and Pervert: “It wasn’t very comfortable for me, and after I made Pervert I made the ‘Freeways.’” Switching gears partly to retreat from those disappointing reactions, she was also determined to avoid being defined by that work alone. In 1994, Opie had begun commuting from her L.A. home to her job as a photo-lab technician at the University of California, Irvine. (She is now a tenured professor at the University of California, Los Angeles.) She came to see the freeways that she traveled daily as a visual representation of the social and psychological constructs that divide communities. Photographing them untrafficked, early on Sunday mornings, she focused on the abstract aspects of their designs. “I do photograph things for people to look at 100 years from now,” Opie explains. “But we’re such a mediated society, that things become historical the next day.” Like Maxime du Camp’s photographs of the Egyptian pyramids, Opie’s soft, grainy, panoramic platinum prints (made as contact prints) are elegiac, as if their subjects are already part of the past. The geometric lines and vaulting curves in Untitled #11 (1994), for example, along with the absence of people, suggest the ruins of a vanished civilization.

Born in Sandusky, Ohio, Opie inherited her interest in history and its visual representation from her father. He owned a large collection of political memorabilia—pins, buttons and other campaign artifacts—which he ultimately donated to the Smithsonian Institution. She came to photography on her own, after writing a school report on Lewis Hine, whose documentary concerns she would one day share. Notions of community, and boundaries, continued to inform her projects, which explore various aspects of the documentary tradition. “Houses” (1995-96) took her to the neighborhoods of Beverly Hills and Bel Air, where wealthy collectors had begun inviting her into their homes—and where she acutely felt her outsider status. In straightforward, tightly framed shots, she photographed the fronts of manicured properties, the houses with closed doors and the locked gates broadcasting that there are those who are welcome and those who are not. These images provide a counterpart to the “Domestic” series (1995-98), for which she traveled the country photographing lesbian couples and families in their homes—her own version of the great American road trip embarked on by such photographers as Stephen Shore or Robert Frank. In contrast to the tidy lawn and topiary shrubs of House #2 (Bel Air), there is the intimate, unkempt interior shown in Joanne, Betsy & Olivia, Bayside, New York (1998). On the table are the remains of breakfast—coffee cups and half-eaten bagels—and toys litter the floor in the home, where two white women live with their adopted Asian daughter. Opie describes this work as a “conversation” with Tina Barney, whose photographs portraying conventional, wealthy families were being widely exhibited at the time. But of course it was more an argument than a conversation, a challenge to the idea that a family must be defined within a heterosexual framework.

Opie expanded her arguments about difference and its significance to American society in “American Cities” (begun 1999) and “Mini-malls” (1997-98), which focus on marginal neighborhoods and incidental structures rather than the iconic monuments or landmark buildings by which cities are usually identified. Both series record the parking lots, alleys and mom-and-pop businesses that constitute the texture of daily life in most urban centers. Much more than the wealthy homes of Beverly Hills, the mini-malls, for Opie, represent the fulfillment of the American dream. Her panoramic black-and-white shots, all taken from across an empty street, with the mall centered squarely in the frame, record the pizza places, nail salons, barbershops, produce markets and automotive service centers owned by Korean, Mexican, Armenian and Chinese immigrants trying to gain a foothold in this country.

In what seemed a departure, Opie went on to make the minimalist “Ice Houses” (2001) and “Surfers” (2003), two color series exhibited together for the first time at the Guggenheim in a room that Opie calls “my Rothko chapel.” At or near the horizon line in each of the 14 meditative photographs in “Ice Houses,” taken in northern Minnesota, is a thin line of trees and small, colorful buildings. These details become increasingly indistinct over the course of the series, until the last pictures, taken in a blizzard, are nearly white monochromes. A similar progression occurs with the 14 “Surfers” photographs, on the opposite wall. Waiting in calm water for a wave, the surfers grow steadily smaller and less visible in an encroaching fog, until they are nearly erased. Describing the two series in the context of her other work, Opie explains that they document a democratic spirit: teenagers and bankers surf the same waves; the houses allow anybody to have waterfront real estate. The ice houses are only used for two months a year, for ice fishing, says Opie, adding, “Come winter, even the mechanic at the gas station can pull his house onto the lake and he has a lake-view property. 4 Though the photographs document these small pockets of democracy, they also telegraph the serenity and solitude an individual can experience even in the company of others.

The show concludes in the messy, day-to-day world of Opie’s own domestic life. “In and Around Home” (2004-05), which the artist characterizes as her “most narrative, constructed body of work,” is also the series that most completely expresses Opie’s attitude toward the personal and political. Among the photographs are intimate images of the life Opie shares with her partner, the painter Julie Burleigh, and their children, Oliver and Sara—including Oliver in a Tutu (2004), of their toddler son looking quite pleased in his own gender-bending outfit of a beaded necklace, silver tiara, pink skirt and red USC T-shirt. The rambling series includes photographs of their South Central Los Angeles neighborhood, as well as their home. In The Bloods, Memorial (2004), a red heart balloon, votive candles and a Virgin Mary statuette mark the spot where a gang member was killed; elsewhere, two drummers and two boys—one Asian and one African-American—lead a Martin Luther King Jr. Day parade. Also in the series are small (4¼-by-3½-inch), informal Polaroid shots of the TV screen (with George Bush, Terry Schiavo, protests against the Iraq War) that show violence and politics infiltrating the household. The series closes on the final wall of the installation, where two large pictures provide a fitting coda. Hovering in one is an LAPD helicopter; in the other, a rainbow kite, symbolic of gay pride. Together, they speak to the basic themes at the heart of Opie’s photographic projects: the importance of difference, and the desire to belong.

2. Unless otherwise indicated, all quotes by Opie are taken from a conversation with the author, September 2008.

This Year’s Official ‘Ultimate Overland Vehicle’ Has a Kitchen, Fridge and Outdoor Shower

Rina Sawayama Line Dances Her Way Through ‘This Hell’ on ‘Fallon’