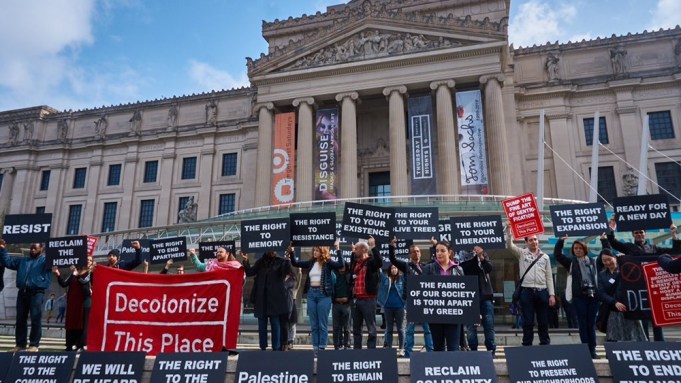 On Columbus Day, hundreds of activists stormed the American Museum of Natural History in New York. They led a “decolonization tour” through its halls, pointing out how the museum’s representations of indigenous peoples reinforce colonialist attitudes. Then they rallied on the museum’s front steps around a towering statue of Theodore Roosevelt on horseback, flanked by a Native American and an indigenous African walking docilely beside him. Using long aluminum rods, activists wrapped a large green parachute around the statue while chanting: “Remove! Respect! Rename!”

The same day, across Central Park at the Guggenheim Museum, a red-and-white sticker with the words “Decolonize This Place” appeared on Maurizio Cattelan’s America (2016), an industrial toilet made of solid gold. After the image circulated online, the museum locked down the exhibition but couldn’t find the sticker or the person who put it there.

Two groups claimed responsibility for initiating the protest and covering the Roosevelt Statue: NYC Stands with Standing Rock and Decolonize This Place. The first is a group acting in solidarity with the encampment in North Dakota protesting against the Dakota Access Pipeline. The second is a project by the art-oriented collective MTL+, that this fall has temporarily united several different causes while in residency at Artist Space’s Books & Talks storefront in TriBeCa.

MTL (the letters do not stand for anything), the core of MTL+, is comprised of Nitasha Dhillon and Amin Husain. In 2014, they joined with other groups to form the Gulf Ultra Luxury Faction, which staged several public interventions to pressure the Guggenheim to prevent the exploitation of workers while building a new museum in Abu Dhabi. They were also involved in publishing Tidal, a political journal that launched in late 2011, in the wake of Occupy Wall Street. When I asked why they chose to focus on the art world, Dhillon said: “There is a leverage that exists in arts institutions, because art provides that space for criticality.”

This fall, MTL+ has transformed Artists Space Books & Talk into a vehicle for putting their strategy into practice within the context of larger movements. The residency’s title, Decolonize This Place, comes from a demonstration of the same name that MTL organized in May at the Brooklyn Museum to protest “This Place,” an exhibition of photographs from Israel and the West Bank that, according to the brochure MTL distributed that day, “lends its cultural legitimacy to a sanitized vision of the region. It normalizes and aestheticizes illegal Jewish-only colonies in the West Bank. It renders invisible the daily violence experienced by Palestinians living under occupation, and the ongoing dehumanization of Palestinians who live in Israel.” The statement went on to excoriate the museum’s willingness to exhibit radical culture at “Agitprop!,” an exhibition of activist artifacts also on view at the time, even when real estate developers who are implicated in gentrifying the surrounding neighborhood sit on their board of trustees and the Museum recently hosted the Brooklyn Real Estate Summit, where developers led seminars on profiting from gentrification.

The curators at Artists Space learned of MTL’s work through Yates McKee’s Strike Art: Contemporary Art and the Post-Occupy Condition (Verso, 2016). He wrote about them in the book and invited them to speak at a launch event  at Books & Talks earlier this year. After the Brooklyn Museum action, Artists Space invited MTL to take up residence at their Books & Talks storefront for three months beginning on September 17,the fifth anniversary of the start of Occupy Wall Street. They agreed, but also renamed their collective MTL+, to reflect its expansion to include McKee as well as Andrew Ross, Kyle Goen, Amy Weng, Aiko Maya Roudette, Marz Saffore, and Samer Abulaela.

Through December 17, as part of Decolonize This Place, Artists Space Books & Talks is hosting meetings, meals, film screenings, banner-making events, poetry readings, and talks that unify five causes—Indigenous Struggle, Black Liberation, Free Palestine, Global Wage Workers, and De-Gentrification. Their installation brochure states: “We can see this place cultivating new cultural and political formations across communities, grounded in collective action and radical imagination with a call to decolonize all places, wherever we may be.”

In late October, at a screening and discussion of Flag Wars (2003), a documentary by Laura Poitras and Linda Goode Bryant about the LBGT community’s role in gentrifying Columbus, Ohio, Dhillon used a quote from theorist Fred Moten’s book The Undercommons to explain MTL+’s approach to building a movement. “The coalition emerges out of your recognition that it’s fucked up for you, in the same way that we’ve already recognized that it’s fucked up for us,” Moten writes. “I don’t need your help. I just need you to recognize that this shit is killing you, too, however much more softly, you stupid motherfucker.”  This describes not only MTL+’s approach to uniting issue-driven movements but also its approach to building coalitions between people who may be both marginalized and active in the dispossession of another group.

On a rainy and cold Saturday night in October, MTL+ was able to drive this point home with “Chinatown is Not for Sale,” a town hall to discuss the role of artists and galleries in the gentrification of Manhattan’s Chinatown. People packed into the hall, sitting in the aisles and standing in the back when there were no more chairs.  The high white walls of the Books & Talks space were covered with huge brightly colored banners that represented a sampling of several causes: “BLACK LIVES MATTER,” “DON’T PLAY WITH APARTHEID #BDS,” “WATER IS LIFE.” For the first half of the night, a panel presented on how small galleries and artists, unable to afford space in Chelsea or Williamsburg, were playing a role in the process of Chinatown’s gentrification.

The unease in the room was palpable. Tomie Arai of the Chinatown Art Brigade started off the panel by asking how many people were artists or worked in the arts and 80 percent of the room raised their hands. Many worked at galleries that had been named in the panel. When the microphone was turned over to the audience, the statements and questions ranged from contrite to defensive, as people tried to reckon with their place within the overlap of the real estate market and the art world and how they can be good allies to their precariously positioned neighbors. Toward the end of the night, the panel offered an eight-point pledge that artists and galleries could take so as not to be complicit in gentrification. Points included supporting local businesses, boycotting slumlords, calling out developers who use pop-up galleries and cafes to upscale the neighborhood, and supporting the community-led rezoning plan.

Artists Space itself is implicated in the transformation of the neighborhood; the Books & Talks space functions as an anchor for the crop of galleries and spaces in the southern part of Chinatown. I briefly ran the bookstore in 2014 and it was exciting to see the pristine space transformed into a messy organizing hall, bestrewn with banners and the detritus of meals and meetings. It seemed, in a way, the latest turn for an organization that has been variously a sanctuary for radical groups and the target of their ire.

In 1979, Artist Space exhibited a series of charcoal triptychs by a white artist named Donald Newman called “The Nigger Drawings,” prompting a furious reaction. A group of artists called the Black Emergency Cultural Coalition staged protests and teach-ins that lasted long after the exhibition. During Occupy Wall Street, a group of artists and anarchists took over Artist Space’s now closed SoHo location, arriving at a nighttime event and refusing to leave. By the next morning several people from the Zuccotti Park encampment were wandering around the expansive gallery while staff members worked at their desks. Stefan Kalmár, then the director of Artists Space, engaged in a tense negotiation with the occupiers that devolved into a surreal shouting match over whether the space would be administered on hierarchal grounds or not. By the end of the day the artists and anarchists had left and a security guard was escorting the last transients out.

After Occupy Wall Street was broken up, Artists Space (under the guidance of curator Richard Birkett) made their resources available to movements like Strike Debt and Working Artists and the Greater Economy (W.A.G.E) and tried to create a critical dialogue on art’s relations to politics through a series of lectures and meetings.

Decolonize This Place seems to be the apotheosis of those explorations but also comes at an interregnum in the organization. Birkett left earlier this year and Kalmár assumed a new position at the Institute of Contemporary Arts in London last month. Perhaps Decolonize This Place is a bridge to a future for Artists Space that is more politically radical and also more open to communities and discourses from outside the art world. It may now be a necessity. The presidential election has changed the political geography of the country, and every cultural institution and social movement will have to consider their position within this new terrain. Projects like Decolonize This Place will need to deploy the networks and tactics they’ve developed against a different set of institutions, and they will have to do so quickly. Forming new cultural and political formations has never been so urgent and yet so precarious.