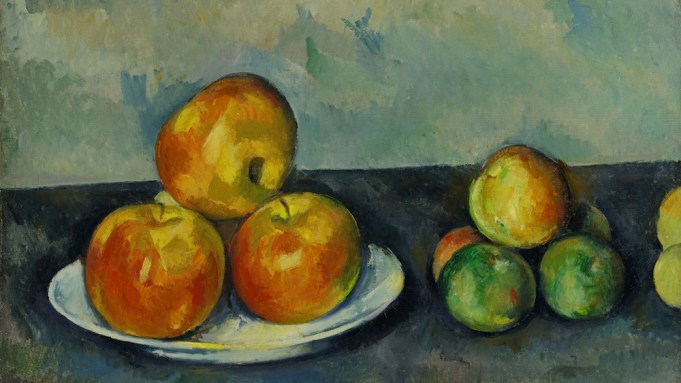 Impressionist and modern works of art from the collections of Madonna, Gregory Peck and Alex Lewyt, the inventor of the clip-on bow tie, will be up for grabs when Sotheby’s and Christie’s start the New York spring auction season next week.

The Lewyt estate, which includes works by Cézanne, Modigliani, Redon, Mondrian and other masters, provide highlights among sale material that is otherwise, in one dealer’s view, lackluster.

“We can clearly see that it’s getting very difficult to find good material,” New York dealer Christophe van de Weghe told A.i.A. on the phone. “The contemporary sales [upcoming the following week] are much, much stronger.”

Sotheby’s May 7 sale, including 71 lots, is expected to bring as much as $235 million. Last year’s sale, which included Edvard Munch’s The Scream, set a record at $331 million.

Sotheby’s sale includes the week’s prize offering at $25-35 million: Paul Cézanne’s Les Pommes (1889-90), a small canvas still life of apples. Off the market for 60 years, the painting comes from the collection of Alex and Elisabeth Lewyt. In addition to the clip-on bow tie and other inventions and business ventures, the New York-born Alex Lewyt invented a bagless vacuum cleaner.

Also from the Lewyts comes L’Amazone, a 1909 canvas by Amedeo Modigliani, last on the market in 1953 (estimate: $20-30 million). It depicts the Baroness Marguerite de Hasse de Villers, a socialite and lover of artist Paul Alexandre’s younger brother Jean, who commissioned the portrait, according to the catalogue. In a mustard-hued riding habit, the raven-haired Baroness directs a smoldering sideways glance at the viewer.

On offer for $10-15 million from an unidentified seller is another of the evening’s priciest works, Georges Braque’s Paysage à la Ciotat (1907), a southern French landscape in bright purples, greens and yellows. “People are really looking at Fauve-period Braque lately,” Gagosian Gallery’s Andrea Crane told A.i.A. by phone. “Still, I think that’s a pretty bullish estimate. But then again these things are hard to find.”

Madonna, meanwhile, offers just one canvas, Fernand Léger’s Trois Femmes à la Table Rouge (1921), estimated at $5-7 million. The proceeds will support education projects in Afghanistan and other countries. “The estimate is incredibly reasonable,” Crane said. “That is a very desirable picture that should do very well for a number of reasons.”

“I understand the Léger painting was in Madonna’s bedroom for many years,” van de Weghe said.

Crane singled out a small Picasso painted-metal sculpture, Sylvette (1954), as a relative bargain. “I think Picasso sculpture is still undervalued,” Crane said. “I think the sculptures, among his body of work, are on the ascent.”

Rounding out the sale are no fewer than five canvases by Pierre Bonnard, eight works by Picasso a trio by Monet and three others by Cézanne.

Van de Weghe acknowledged that there are some top-notch offerings.

“The little Cézanne is quite beautiful and very rare, and the Picasso sculpture, Sylvette, is of the highest quality. But there just aren’t many big names and high-quality paintings.”

In a smaller sale the following night, May 8, Christie’s puts 51 works on the block in an auction expected to bring as much as $202 million. The house’s May 2012 sale of Impressionist and modern art garnered just $117 million on 31 lots.

The priciest offering is Chaim Soutine’s Le petit pâtissier (ca. 1927), which has been in an unnamed European collection since 1977 and is estimated at $16-22 million. The last of a series of six portraits of young pastry chefs, according to the sale catalogue, the canvas isolates the young man, clad in kitchen whites, against a dark blue ground.

Priced at $15-20 million is Andre Derain’s Madame Matisse au kimono (1905), showing the painter’s wife in Japanese garb. In a private European collection since 1972, the painting was probably made, according to the catalogue, during the summer Derain spent with Matisse in Collioure prior to the Salon d’Automne, the exhibition that brought the Fauves to public attention.

Joan Miró’s Peinture (1933), estimated at $10-15 million, is on offer from an unnamed buyer who purchased it from Helly Nahmad Gallery in London in 1996.

A work from the collection of Veronique and Gregory Peck is available at Christie’s as well: Léger’s Les deux figures (1929) depicts two women and is estimated at $3-5 million.

The auctions continue the following week, with a sale of postwar and contemporary art at Sotheby’s on May 14 that’s expected to bring in excess of $280 million, and at Christie’s on May 15 that is estimated to fetch in the region of $300 million. Finally, on May 16, Phillips expects to ring up as much as $110 million at its contemporary art auction.