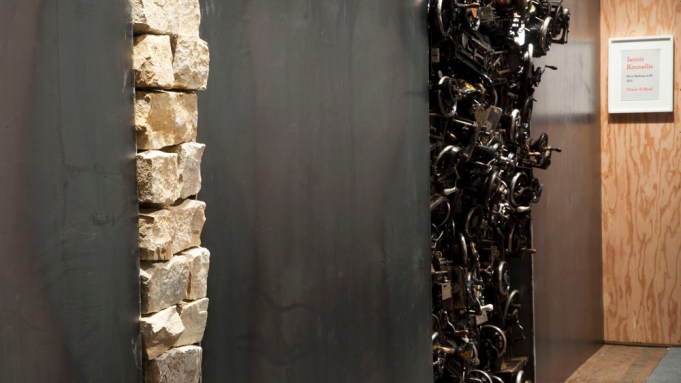 All over New York City, art-worlders gathered over the last five days during the convergence of art fairs including the Armory, ADAA Art Show and Independent art fairs, as well as smaller shows like Volta and Scope.

The week was chockablock with parties and big-selling shows.

On Thursday, Pace Gallery dealers and clients congregated for prime rib and salmon downstairs at the Noho restaurant Acme to celebrate the opening of Romanian painter Adrian Ghenie’s sold-out show.

Some of the art fair crowds spilled over to Chelsea galleries. On Saturday at Gagosian Gallery on 24th Street, a Basquiat show that was already getting notable attendance clocked 5,500 visitors, up from a previous one-day high of nearly 4,000.

More than 20,000 attended the Art Show at the Park Avenue Armory on the Upper East Side. New York’s Tibor de Nagy Gallery sold out its booth of sculptures by John Newman; a large sculptural installation by Jannis Kounellis at Cheim & Read was sold to a major American museum, according to a press release.

Bringing a bit of downtown sass to the highly manicured Art Show was the booth of Chelsea gallery PPOW, which was devoted to ‘80s works by the late New York painter Martin Wong. Two of them, from 1988, depicted NYPD Sergeant Richard de Clara, who, gallery principal Wendy Olsoff told A.i.A., was charged with policing Grand Central Terminal after hours, and was caught shedding his uniform and running around naked.

On the Westside piers, 60,000 visitors streamed to the Armory Show at $30 a ticket, including some celebrities: “The cast of ‘Girls’ is here,” Armory press rep Allison Rodman told A.i.A. Saturday with a grin.

The Armory Show is perceived as being up against the ropes, with Chicago’s Merchandise Mart Properties, Inc., offering the fair (and the smaller Volta and Platform L.A. fairs) for sale and not yet finding buyers. The fair has also lost some innovative exhibitors to newer New York fairs like Frieze New York and Independent.

Still, Armory remains the largest New York March fair by far, with over 200 exhibitors this year, as compared with 49 at Independent and 72 at the ADAA Art Show.

“I heard from several dealers that the Armory was very successful,” New York art advisor Wendy Cromwell told A.i.A. “It seemed to me that things were flying out of the booths at galleries like Kavi Gupta and Marianne Boesky.”

New York’s Sean Kelly, whose Armory booth was stocked with works by Alec Soth, Laurent Grasso, Los Carpinteros and Nathan Mabry, told A.i.A., “The 2013 Armory Show has been remarkably successful for us, with strong sales for many of our artists.”

The consensus was that the quality of works on offer was not uniformly high. But there were some widely admired works in the contemporary section at Pier 94, like Diana Thater’s wall-hung, corner-wrapping multi-monitor videos at David Zwirner. A gallery representative told A.i.A. that two of the three pieces had sold, each for $150,000.

Many were talking about Zurich gallery Mai 36’s solo booth devoted to 1970s works by Matt Mullican, including drawings of Glen, his alter-ego, which hung on deep red walls and were priced mostly around $5,000 to $8,000. The gallery’s Victor Gisler told A.i.A. that he viewed his booth as an opportunity to educate American visitors about an under-known American artist.

There’s no doubt that some free works got snatched up. Positioned near the entry to the contemporary wing was Charles Lutz’s piece Babel: a stack bigger than a pickup truck of cardboard replicas of Warhol’s Brillo boxes, free for the taking. People were carrying flattened-out boxes everywhere you looked, including filmmaker John Waters, seen during the preview.

Downtown, the Independent art fair, in its third year on West Chelsea’s 22nd Street, was characterized by wide-open areas, abundant sunlight and an absence of cubicle-shaped booths and a plurality of strong work by innovative young artists.

At this fair you could find more than one work of sound art, not something in evidence at Armory or the Art Show. At Paris’s gb agency, Deimantas Narkevicius’s rumbling 10-minute Matching the Tu-144 (2012) played on a beautiful antique reel-to-reel tape machine. “Ideally the artist wants us to play it extremely loud,” the gallery’s Alexandra Delage told A.i.A., “but when we tried that, I was afraid they would kick us out.” In an edition of three, the work was priced at just under $29,000.

Founding director Elizabeth Dee told A.i.A. that the fair offered free space to New York’s nonprofits, in a spirit of post-Sandy solidarity. Near Dee’s display, where she perched on a white leather couch, was the Kitchen’s space, where flutist Claire Chase enchanted visitors on Saturday with a performance of a 1980s piece by Steve Reich. Other performers, in 10-minute slots, included C. Spencer Yeh and Michael Smith.

Among the fair’s hits were sexy wallpaper at Gavin Brown’s enterprise by Thomas Bayrle, with a male-female couple throwing off countless colorful items of clothing. Also well-liked were sculptures by Nicole Wermers at London’s Herald St gallery consisting of dish racks, sitting atop plinths, chock full of various kinds of flatware.

“The crowds are bigger this year than the first two years,” Alexander Hertling, of Paris gallery Balice Hertling, told A.i.A. “I think people are starting to come just because they’ve heard about it, whereas earlier it was just art people. Some visitors have even instigated those ‘Is this really art?’ conversations.”