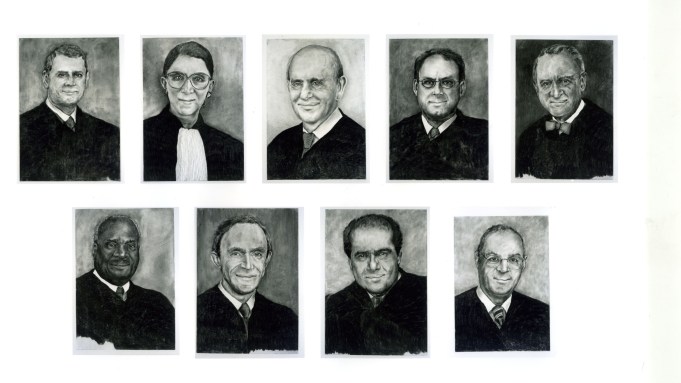 As many of us know all too well, sexual freedoms and legal freedoms don’t always enjoy a peaceful coexistance. The law, particularly when it comes to sex, is both necessary and selective. It is the law, represented by nine charcoal drawings of America’s Supreme Court justices, that greets visitors with a smug, knowing smirk at the entrance of Paul Chan’s exhibition My Laws are My Whores, now on view at The Renaissance Society, located on The University of Chicago campus.

The drawings are hung no less than ten feet high above the ground, well above exposed metal beams that must be peered around in order to get a glimpse of Chan’s portraits. Not too unlike official photos, not too unlike amusement park caricatures: one must literally look at Chan’s drawings from behind bars.

In light of a recent Washington Post article exposing Viagra dealing as part of the CIA’s bargaining chips with Afghani warlords, and with photos detailing the horrors of Abu Ghraib impossible to forget, Chan has located an unquestionably libidinal, evidentially sadistic tone to today’s war. For Chan, herein lies a paradox: Why weren’t certain soldiers and officials associated with Abu Ghraib charged outright with sex crimes?  Particularly when sex and sexuality has historically been, and continues to be, a regular judicial issue?

Indeed, 18th century illustrations of Sade’s earlier novels bear a frightening resemblance to recent actions considered ‘maltreatment’, ‘dereliction of duty,’ and ‘indecent’ by the US Government. Similar phantom images of abused power are mirrored once more by Chan in Untitled (After a Certain Chateau), a 2009 silent animation of bodies in silhouette, gyrating in various states of sexual frenzy and then, suddenly, disappearing.

Chan has mostly dealt with the question of (un)lawful sex in text because, ultimately, laws are written. Nine large, text-based drawing meant as ‘portraits of distinct sexual voices’ reverberate against the nine Justice portraits at the exhibition’s outset. Elegantly arranged like the usual suspects in a police line-up, random shoes accompanying each text-drawing provide just the touch of personification needed.

The series doubles as studies for the creation of computer fonts specially encrypted letter-by-letter. This particular set, titled Sexual Healing/ Shift for Harassment, features lowercase letters whose meanings are cribbed from popular love songs, while uppercase fonts are phrases taken from the transcripts of sexual harassment court cases.

Eighteen fonts live online, available for download on Chan’s website, nationalphilistine.com. They are also used as the subtitles for the video The Mother of All Episodes (2009), a Law & Order episode presented silently on the floor, with the iconic Law and Order ‘chung-chung’ sound startling an otherwise quiet space.

To type with any of Chan’s fonts is to engage in vicarious experience — to experience another’s stream of consciousness, rhythmic and pornographic. Like automatic writing or sex itself, the experience implies a loss of control, orgasm or death – thematically connecting with the only sculptural work in the show, Oh Why So Serious? (2009), a computer keyboard turned model graveyard.

Having received his undergraduate degree at the Art Institute of Chicago, Chan describes his exhibition at The Renaissance Society as a ‘homecoming,’ and it is to the credit of curator Susanne Ghez, Director of the Renaissance Society, for situating the exhibition amongst Chicago’s larger, burgeoning art scene increasingly known for its activist affiliations. Established as one of contemporary art’s most notableagent provocateurs, Chan’s success in My Laws are My Whores is as much to do with the work and the important, difficult questions explored therein, as by his unafraid willingness to posit them in public.