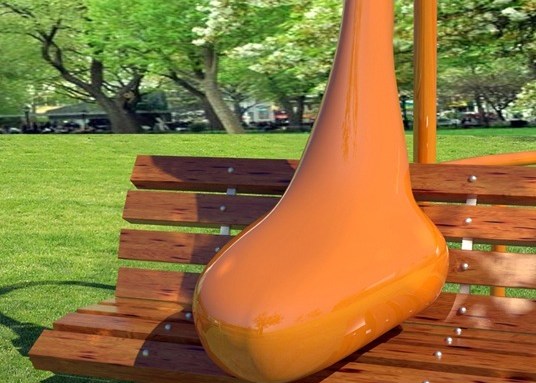 Comprised of six long, amorphous, Crayola Tempera-colored aluminum-and-fiberglass sculptures, Pet Sounds features surfaces embedded with sensors that activate sonorous electronic tones when caressed. (The work, which takes its title from the 1966 Beach Boys record, offers a verbal interpretation of pet noises.) Long was in the middle of composing the sounds when he spoke to A.i.A. by phone from Los Angeles on Friday. After a first listen, he began dabbling with ascending and descending electronic arpeggios, punctuated by the screech of a seagull. These sounds were being produced for a blue sculpture that Long says “looks very marine-like.”

The sculptural elements of Pet Sounds are located at several entry points to the park’s grassy middle field. Each begins as a narrow railing, rooted in the ground. The railings travel into the park, and eventually morph and distend into blob-like forms, many of which are positioned anthropomorphically-one blob rests on a picnic table, another slumps on a bench. “The railings serve functionally as a guide through the park, and also metaphorically, as a place where one physically connects to the park,” says Long. “They are handles to the earth.”

Long is perhaps best known for “The Amorphous Body Study Center” (1995), his contribution to the 1997 Whitney Biennial. For this work, the artist collaborated with British electro-pop group Stereolab to create interactive sculptures with original music. The project included Bubblegum Station, a sculpture of table and chairs that served as a listening station. Headphone-wearing participants were invited to mold mounds of pink, chewing-gum-like modeling clay, which Long later affixed to the piece.

“I loved watching people sitting on the couch together and not speaking,” says Long. “I remember there was this amazing drag queen, totally posing and not getting up from the couch—just loving it.” This same spirit of community is part of the conceptual impetus of Pet Sounds, Long explains. “When people come up to Pet Sounds, they’ll see people caressing these big forms.”

After “The Amorphous Body Study Center,” Long stepped away from interactive art. “I felt it interfered with my original project, which involved the illusion of autonomy,” says Long. “I came out of theoretical programs like the Whitney Independent Study Program, which were about the critique of the object and consumption, and aura and presence. When my work became interactive, criticality was lost, because fun happened.”

In Long’s purview, fun might be the enemy of critical discourse, but it is a good friend to his occasional desire to stand at a remove from the over-intellectualization artworks. “I suppose that’s why you could be critical of Burning Man. You could say people are just having fun and not thinking,” says Long. “But I’m not so sure how important thinking is.”

At the 2008 Whitney Biennial, Long showed a series of untitled, ghostlike albumen prints that depicted the bird droppings he found alongside the Los Angeles River. These patterns were the two-dimensional basis and complement for a series of untitled, elongated Giacometti-esque abstract sculptures, which resemble pale alien skeletons. The artist composed the sculptures from detritus he found in the river basin. “The river has this undifferentiated compositional power. It just puts things together-trash, vegetation,” says Long. “So I made this stuff all out of garbage from the river.”

For Pet Sounds, Long utilized a similar magpie approach. “All the forms were influenced by what I saw in Madison Square Park,” says Long. “I saw someone in the park slouching on a bench-that’s the orange sculpture. And the pink bubblegum-colored piece is a reference back to my own work, Bubblegum Station. I really enjoy having that connection.” The piece’s unofficial godfather is none other then the man who composed the original Pet Sounds, Brian Wilson. “The music from Pet Sounds is genuine and sensitive, and I needed that for this project,” says Long.

“I’m insecure about the project because it’s so generous and playful-one could say uncritical,” he continues. “In the company of Brian Wilson, I feel like I’m kind of safe.”