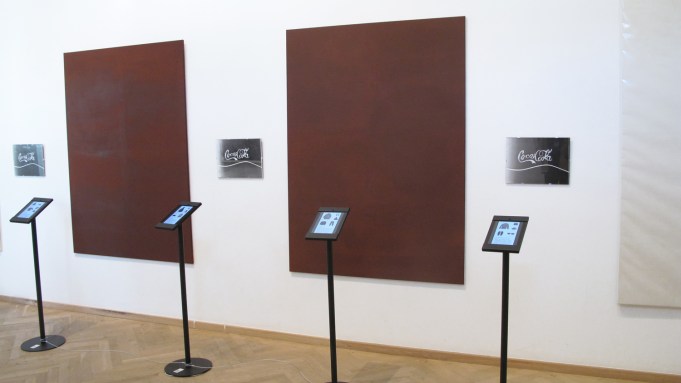 After a cool, drizzly Scandinavian summer, the clouds parted ways and sundress weather reigned for the vernissage of Copenhagen Art Week (Aug. 21-30). Organized by the web magazine kunsten.nu, the festival comprised more than 75 exhibitions, along with dozens of performances and talks. The charming Danish capital teemed with culture lovers of all stripes, as the art events coincided with a literature festival at the Louisiana Museum of Modern Art and a food festival throughout the city. During the opening weekend, much activity was centered around CHART Art Fair (Aug. 21-23), a thoughtfully curated show featuring exclusively Nordic galleries.

Housed in the beautiful Kunsthal Charlottenborg, built in the 17th century as a palatial residence, the fair’s third edition featured 28 participating spaces. Spearheaded by five Copenhagen galleries, CHART eschews typical booth architecture, utilizing the existing airy, sun-filled spaces of the Kunsthal to present its wares. The overall effect—like the city itself—was an intimate, friendly antidote to fairs with a frenzied commercial vibe.

The festivities kicked off on Friday afternoon with a VIP opening and performances with a local flavor. A boat tour featured a sound work by American artist Will Owen and a participatory scent-making workshop, using filtered canal water and plant essences, led by Copenhagen-based American artist Jenny Gräf Sheppard. Back at the Kunsthal, Norwegian artist Tori Wrånes delivered a mysterious, rhythmic incantation in a lilting made-up language (a twist on Norwegian, according to Scandinavian language-speaking participants). Lit by a black light in an otherwise darkened room, the artist, clad in a long wig and craggy make-up, recalled a shaman or nomadic seafarer. After the performance a party thronged by thousands raged late into the night, with sets by Nordic bands like Reverie and Marching Church. The following days featured additional performances by artists such as Julie Verhoeven and Peter Jensen, as well as a lively discursive program curated by ArtReview editor-in-chief Mark Rappolt.

Below are a five highlights from the fair’s participating galleries.

Andersen’s Contemporary Art, a Copenhagen gallery that is one of the fair organizers, gave pride of place to head-turning new abstract works by the 43-year-old Danish artist Kirstine Roepstorff. Director Claus Andersen explained that the artist has recently turned “from sociopolitical collage-based practice” to a more open-ended investigation of form. The ground of the painting Asian Waters (2013) includes fragments of fabric quilted together—a nod to the artist’s investigation of nontraditional materials. Affixed to the canvas are abstract laser-cut brass forms based on designs drawn by the artist. The metal appears again in a mobile entitled Mercury’s Orbit (2015), with hanging symbols like eyes and triangles evoking ancient rituals.

David Risley, a gallery established in London in 2003 that relocated to Copenhagen in 2009, packed a variety of art into an alcove space. Colorful works based on album covers by young American artist Alex Da Corte and Londoner Henry Krokatsis’s “paintings” composed of multiple mirror shards from the ’20s and ’30s were joined by two new works by conceptual British artist Ryan Gander, authored by the fictional artist Spencer Anthony. An exhibition with works from the same series is on view in Risley’s gallery. In a fictional interview between Anthony and Gander, Anthony reveals himself to be at least in his 50s and somewhat of an aesthetic nihilist, having no access to the Internet. “What am I to you and Risley, and his runners and go-fers?” Anthony asks. “A Post Industrial, Post Corporate Modernist Plastic Poet … without the Internet…?” A work resembling a bulletin board without information is joined by Weeping Baby in the Night, 2010 by Spencer Anthony (2015), a painting of value scales on which is handwritten “painting for the weak minded.”

Reykjavik gallery i8, no stranger to trendsetting, brought the fair’s only solo presentation of new-media work. Three plaster sculptures by the Berlin-based Icelander Egill Sæbjörnsson, resembling rock formations, became the ground for projections of videos. The moving images ranged from anthropomorphic to whimsical. In one sequence, a sculpture appears to don sunglasses and ride a skateboard; in another, a rocket launches, lending what gallery associate Thorlákur Einarsson called a “lunar” aspect to the work. Though Sæbjörnsson’s works strongly reference technological phenomena and screen culture, Einarsson adds that the 42-year-old artist is from the “pre-Internet” generation. He was originally trained as a skilled draftsman who happened upon technology when trying to perfect his technique.

A Copenhagen gallery specializing in photographic practices, Peter Lav brought a selection of works by their artists. Highlights included two works by Danish artists: Sophia Kalkau’s Algebraic Objects (2015), an image of suggestively pink discs shot from above against a monochromatic background, and Adam Jeppesen’s BO • Uyuni, (2015), depicting a vast, empty landscape that looks like the end of the world. Gallery director Jens Erdman Rasmussen explained that they are part of a series Jeppesen completed when he traveled from the North to the South Pole over the course of 487 days. Using a large format camera, Jeppesen documented his voyage. The resulting 8½-by-10½-foot wide archival ink-jet print on rice paper contains evidence of scratches on Jeppesen’s negatives, and the paper’s deliberate folds echo the serial nature of printing.

VI, VII, a hip Oslo gallery with a knack for scouting young talent, showed a lively presentation by two artists in their 20s. American-born, Norway-based Emma Ilija Wyller’s monochrome paintings were brushed with solutions the artist concocts from protein powders, chalk and chocolate. (Past paintings have included such morphing ingredients as milk and spirulina.) Gallery founder Esperanza Rosales explained that the artist is interested in the potential for the state of the body to change (by, for example, musculature growth or pleasure) by ingesting proteins of this sort, and for the artworks containing them to change as well. On an unassuming low pedestal, the artist contributed additional edible gelatin-like objects composed of porcelain, matcha, coconut milk and agar. Berlin-based artist Mikael Brkic-who also has a current exhibition at VI, VII-showed PDF-based work from his “Campaigns” series on individual tablets. Based on his day job as a copywriter for an online retailer, the moodboard-like works showcase images of clothes worn by Brkic and his friends, with titles like “Mediterranean getaway.” Brkic’s corporate aesthetic is a knowing nod to a prevailing “yuccie” sensibility, with the featured clothes and accessories hailing from designer brands more than underground labels.