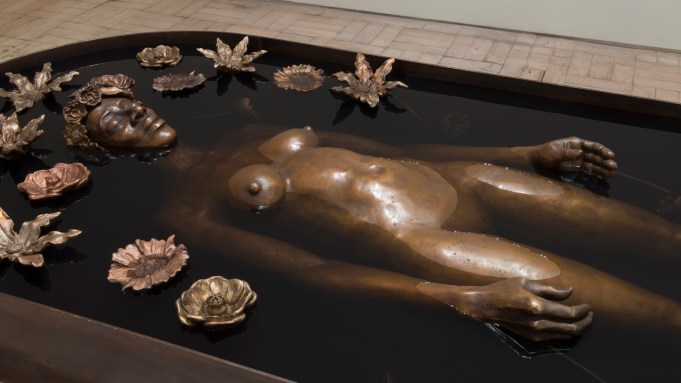 When asked why he thought there may be a surge of interest in contemporary African art in the past year, Joost Bosland, a director of the Cape Town branch of Stevenson, the largest contemporary gallery in South Africa, winced. “I’m not sure if that surge of interest really exists outside of the art magazines,” he stated.

It was easy to see why he hesitated to be wedged into a trend. Overseeing a serious and thoughtful program, representing artists such as Robin Rhode, Zanele Muholi, Pieter Hugo and Nandipha Mntambo, Bosland didn’t want to be the “big thing” only to be discarded when the media looks elsewhere—to Cuba, perhaps, or any other place yet to be mined for their cultural resources. In essence, he doesn’t want to be colonized by the art world, especially given that Stevenson, which participates in fairs such as Frieze, Paris Photo and Art Basel, already exists firmly within it.

But like it or not, attention has certainly shifted to Africa, thanks to events like the 1:54 Contemporary African Art Fair, which had successful runs this past year in both London and New York during their respective Frieze weeks, and the FNB Joburg Art Fair, which generated international attention during its eighth edition from September 11-13. And at the end of 2016, the Zeitz Museum of Contemporary Art Africa, the first museum dedicated to contemporary African art, opens on the waterfront in Cape Town. Housed in a former grain silo, the institution will encompass over 100,000 square feet and will be run by Mark Coetzee, a former director of the Rubell Collection in Miami. The Zeitz Collection, assembled by former Puma CEO Jochen Zeitz, will form the foundation of the museum.

When apartheid ended in South Africa in 1994, there was a desire in the West to learn more about a country that was, since the 1940s, cut off from the rest of the world by economic and cultural sanctions. This initial burst of attention from collectors, international museums and the media birthed the careers of South African-born international artists such as William Kentridge, Marlene Dumas and Robin Rhode, but didn’t result in sustainable institutional support for the artists who remained in the country. Public funds went to providing electricity, clean water and housing for the nation’s impoverished residents—not for cultural initiatives. South African artists had to rely on private collectors, a small network of galleries and their own communities in order to gain exposure and fund projects.

One such private collector was Paul Harris, a South African businessman and investment banker who also owns the Ellerman House, one of the most expensive hotels in Cape Town. Sensing an opportunity to both showcase his collection and attract high net-worth individuals, Harris, who bought the property in 1988, installed pieces from the 1,000 works by South African artists he had collected since the early 1980s throughout the hotel property. Spanning the 19th century to the present, the collection is an homage to South African art history. Today, paying guests are invited to take guided art tours, and to visit the gallery underneath the pool. Built in 2009, the space is dedicated exclusively to contemporary works.

Ellerman’s display strategy is salon style, reminiscent of the original home for the Barnes Foundation in Philadelphia, and more encouraging of an aesthetic rather than a critical appreciation of the works. But what the hotel collection can offer, and white cube galleries in South Africa cannot, is a glimpse of a century of culture.

The artists in the Ellerman Collection include women and men; formally trained and self-taught artists; white, black and what the South Africans still call “colored,” or mixed race artists; European colonialists and tribespeople. Paintings by Maggie Laubser, a white woman credited with bringing German Expressionism to South Africa in the 1920s, are mixed with self-styled expressionistic works from the 1940s by Gerhard Sekoto, a black artist who lived most of his adult life playing jazz piano in self-imposed exile in Paris. On the ground floor, a bronze sculpture of a face by Lionel Smit, a white artist whose painting of a black woman was chosen as the “face” of the BP Portrait Award in 2013, leads into a small room where the painting Snow on Location (1964) by Ephraim Mojalefa Ngatane hangs. The impressionistic depiction of snow falling in a township in Cape Town is an example of what came out of the Polly Street Art Center, an informal art school that was one of the only places to train black artists in apartheid South Africa. Ngatane’s loose brushstrokes are mirrored in the lines on Smit’s bronze cast—a nod to the way South African artists have affected each other stylistically, rather than a curatorial choice.

The problem, of course, is that the only people who can see the Ellerman Collection are those who can afford to stay there. But its very existence lends the richness of art history to what would otherwise appear to be a global contemporary style of the South African artists I saw in the commercial galleries in Cape Town. Like so much work produced in the Internet age, the art looked like it could have been made anywhere.

This was certainly the case with two installations by Julia Rosa Clark at WHATIFTHEWORLD, a gallery housed in a former synagogue that focuses on emerging South African artists. Entitled Tone Poem and Falling and Flying (2015), the collages made from newspaper clippings and fabric would have looked just as at home in an MFA show in New York as in Cape Town. But fitting in may be the point. “When we had a booth at a satellite fair at Basel in 2009, we were anxious that our work would be at the same standard as the rest,” confessed the gallery’s curator, Ashleigh McLean. “We found that oftentimes our work is stronger.” It’s a sentiment that many young galleries share when they first begin their programming—but in this case, one that was heightened by South Africa’s perceived distance from the center of the art world.

McLean stated that roughly 40-60 percent of the gallery’s sales comes from international buyers; Stevenson and SMAC, another gallery I visited, reported a similar breakdown. Stevenson stated that 80 percent of its sales come from art fairs, while only 20 percent come from local South African buyers. SMAC, whose program includes works by Kenyan, Beninese and Zimbabwean artists, states that 75 percent of works are sold internationally. Buyers are drawn by the exoticism of “contemporary African,” and also because, as SMAC assistant director Marelize van Zyl told me, “our rand is very weak against other currencies. What’s expensive to us is not necessarily expensive to overseas collectors.”

“If you’re a 20-year-old artist in Amsterdam, what on earth on you going to talk about?” asked Bosland, the director of Stevenson, who himself was born in the Netherlands, and has lived in South Africa for the past eight years. “But as a South African artist—there’s just so much richness.”

Some of this richness was on view at “Metamorphoses,“ an exhibition of new works by Nandipha Mntambo at Stevenson (through Oct. 3). Mntambo, who was born in 1982, came of age in the era after apartheid. The exhibition included Lover’s Last Frontier (2015), a set of eight drawings constructed from cow hair woven through paper; Melancholy’s Bride (2015), a sculpture made from cowhide, resin and polyester mesh that had been molded around Mntambo’s crouched form; and Minotaurus (2015), a larger-than-life bronze that depicted the artist, naked except for a loincloth, wearing the bullhorns on her head and staring at some unfixed point on the floor.

To an outside viewer, there seemed to be a lot to read about South Africa in the work. The references to animals and their spirits seemed connected to South Africa’s unique position as the home of some of the world’s last remaining large mammals—the lions, white rhinos, elephants and other wildlife that are protected in the Kruger National Park in the north of the country. And finally, Mntambo’s insistence on casting herself as the model for the tragic Shakespearean heroine, in Ophelia (2015), appeared a deliberate attempt by a black artist to assert herself in a role normally reserved for white women.

A gallery attendant disabused me of that notion. “No, Mntambo is trying to transcend the confines of ‘female’ and ‘black,'” he told me. My companion for the day, the elegant and soft-spoken art dealer João Ferreira, agreed, explaining that Mntambo is interested in material transformation, as well as the ability of the artist’s own body to become mythologized in her art work. A metamorphosis of sorts, but different than the one that preoccupied me as an American woman invested in racial and identity politics. I wanted Mntambo to be saying something about race and gender—she wanted me to see beyond that to her position as an artist.

“Africa has been overlooked for too long,” van Zyl said, and the galleries in Cape Town offered a glimpse of why this might be true.

It seems the only thing to do is to left African artists speak for themselves through the channels established by the existing galleries, their participation in art fairs, and the fanfare that will surround the opening of the Zeitz Contemporary. Fortunately, the more channels that open to the international art scene, the more rich the access will be—and the more lasting a power the art being made in South Africa will have.

Gift Guide: The Best White Elephant Gifts Everyone Will Want to Take Home