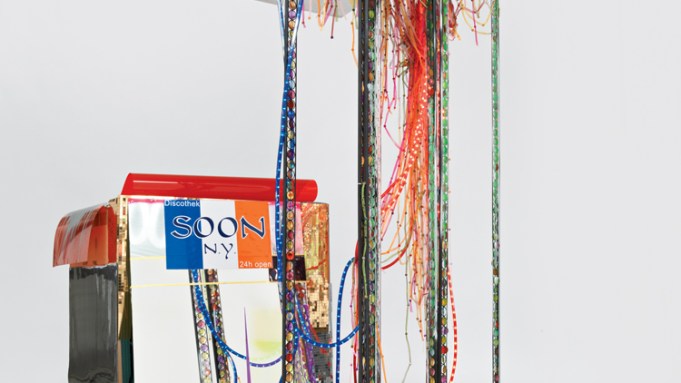 “Szalon” at the Logan Center for the Arts

Curator Monika Szewczyk’s exhibition  at the University of Chicago’s Logan Center initiated a rich, open-ended conversation between over 60 works of art, from Gabrielle Garland’s wonky oil interiors and Ramyar Vala’s Persian rug-inspired chairs to R. Kelly’s Trapped in the Closet. Conjuring the realms of the studio and the salon as hubs of fluctuating-and sometimes clashing-artistic ideas, this group show was freeing in its indeterminacy.

Christopher Williams, “The Production Line of Happiness” at the Art Institute of Chicago

Williams took on his first museum retrospective in a typically holistic manner, with every element of the exhibition underscoring his ongoing inquiry into the conventions of image-making and presentation. The show spanned three spaces across the Art Institute’s sprawling buildings, which had the effect of drawing the rest of the museum into dialogue with his methods.

Isa Genzken at the Museum of Contemporary Art

To walk through this exhibition was to trace four decades of sustained yet divergent experimentation with form, texture, material and color. Together, the works formed a vibrant, vital insight into the development of Genzken’s practice, from an early engagement with minimalism through the freewheeling architectural and figurative assemblages of more recent years.

These recent works from Adams’ ongoing “Deconstruction Worker” series collapsed figure and cityscape into bold, graphic collages. Flat as they are, the contrast between solid swaths of color and patches of texture, and between rigid grids and organic forms, made for a constant shifting of perspective as subject became object, and vice versa.

DNA is so personal a material, yet so clinical a concept-a tension that Binion recalls in this series of mixed-media compositions. At first glance geometric studies in pattern and texture, closer examination of the panels reveals embedded artifacts from Binion’s biography-address book entries of art world contacts, for example-that compounded modernist formalism with personal narrative.

Smokey Robinson on Sharing MusiCares Honor With Berry Gordy, ‘My Very Best Friend in the World’

It’s Frigid Outside, Reusable Hand Warmers Keep Your Hands Toasty Without the Bulk