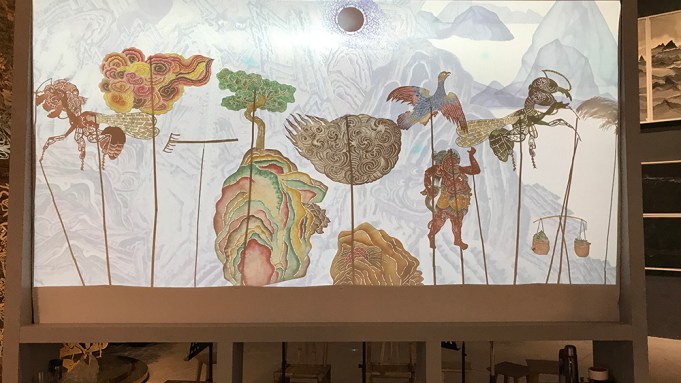 Since 1972, the United States has maintained the “One China” pretense that Taiwan and Hong Kong are not culturally or politically distinct from Mainland China. But no such fiction prevails at the Venice Biennale (through Nov. 26). Although officials there accorded the People’s Republic of China a national pavilion in 2005, Taiwan and Hong Kong continue—since 1995 and 2001, respectively—to enjoy Collateral Event status and “representational” treatment. In common parlance, all three venues are called “pavilions” and seen as representing separate sociopolitical entities.

This year, another dose of reality comes in the form of varying critical response—or lack of it—to the three Chinese exhibitions. Despite decades of lip service to multiculturalism, the message about Western reception is unmistakably clear: the less Asian your work looks, the better.

The most generous coverage—including A.i.A.’s own April-issue preview article by Travis Jeppesen—has gone to the Taiwan pavilion, which commemorates the legendary endurance performances of Tehching Hsieh. Whatever personal ties Hsieh may retain to his place of origin, he effectively transformed himself, in his artistic practice, from a restive Taiwanese citizen who jumped ship in the US in 1974 to a full-fledged Western avant-garde artist, known familiarly in the downtown New York art scene as “Sam.”

So it is more than a little ironic that Hsieh is now lionized by Taiwan, whose strictures (familial obligations, anti-Communism, rampant commercialism, and Chiang Kai-shek’s one-party rule) he once fled—and artistically exploded. Shown in the gloomy confines of a former prison, the artist’s grid of approximately 8,700 bleak self-portraits—produced while wearing a work uniform and punching a time clock every hour for a year—seems conceptually smarter and more harrowing than ever before. On the social level, the piece functions as a comment on Taylorism, individual duty, and the job-regulated life. Think Chaplin’s Modern Times, without the laughs.

Philosophically, pavilion curator Adrian Heathfield, author of Out of Now: The Lifeworks of Tehching Hsieh (2008), presents the artist as a kind of lone character out of Beckett, one who also oddly prefigures present-day economic precarity. However grim, this existential type is clearly more congenial to contemporary Western sensibility than “other” (i.e., Asian) antecedents such as reclusive sages, Chinese literati, or self-mortifying Indian sadhus.

Equally Western-friendly and a bit more up-to-date, Samson Young’s “Songs for Disaster Relief” exhibition at the Hong Kong pavilion centers on the music industry’s “charity single” fad of the 1980s. (Yes, those donation-inducing CDs and videos that feature hordes of celebrities singing heart-wrenching “One World” ditties). Viewers are prepared for the form by two antechambers presenting, among other things, marked-up vinyl albums of the Singing Sergeants variety, along with a Tom Mix Straight Shooter pledge sheet (“I promise to shoot straight with my parents,” etc.). The real payoff, though, comes in a third space featuring a video projection of the Hong Kong Federation of Trade Unions Choir earnestly delivering “We Are the World” in whispers. In the courtyard, a neon wall script positioned above a multi-colored platform quotes Mao’s 1957 message to socialist youths: “The world is yours but also ours but basically yours.” Nearby a video shows a man, shot from behind, facing an open bay and singing, in Cantonese, a sequence of numbers. The figures, recalling the contribution tallies superimposed on TV screens during fund-raising drives, replace the lyrics to “Many Hearts Prevail,” a 1991 super-group song created (to the tune of “Bridge Over Troubled Water”) in response to floods in eastern China.

As a coda to the show, letters on a wall across a small canal spell out WHY HAVE YOU FORSAKEN ME—the theme of half the love songs in the world, of course, but also some of Christ’s last words on the cross. Clearly, the thirty-nine-year-old artist, who holds a PhD in musical composition from Princeton University, has been allowed to exercise a fertile globalist imagination in the service of both pure aesthetics and social critique, without any obligation to make his own position clear. How does Young really feel about Mao, charity drives, choral music, or Jesus? Does it matter? Maybe the mystery—or the right to be self-contradictory—is exactly the point. Such is the Western-style freedom of expression still enjoyed in Hong Kong.

In contrast, mainland China offers a nativist, backward-looking pavilion that theoretically ought to fail but doesn’t—due to a surprisingly lively installation and audience response. The show was curated by Qiu Zhijie, a star artist of the 1990s whose standing in academic and governmental circles has steadily risen in proportion to the increasing “Chineseness” of his work. Tellingly titled “Continuum—Generation by Generation,” the pavilion display directly reflects the nationalistic policy of President Xi Jinping: China’s millennia-old cultural traditions can and should be adapted to contemporary circumstances and tastes.

Accordingly, two of the four participants are fine artists and two are craftspeople. Wu Jian’an, an associate professor at the Central Academy of Fine Arts, Beijing, has installed a huge, brightly colored cut-paper collage of primeval mountains and dotted the pavilion space with copper-sheet “magical trees” filigreed with various mythological figures. Tang Nannan, who teaches at the China Academy of Art in Hangzhou, contributes ink paintings of turbulent ocean waves. Embroidery master Yao Huifen, a certified conveyor of the National Intangible Cultural Heritage, offers fabric renditions of the famed Song dynasty painting Skeleton Fantasy Show, depicting a child entertained by a skeleton puppet manipulated by an actual skeleton. Meanwhile, to the delight of many visitors, Wang Tianwen (who holds the official title of first-level Chinese arts and craft master), puts on a full-blown shadow theater performance, complete with live musicians, singers, and voice actors.

In his catalogue essay, itself an object lesson in how one must think and speak to gain official approval in the People’s Republic today, Qiu Zhijie says that his selections are based on two traditional principles. He expands the concept of buxi (“ceaseless” or “unrelenting”) into the vision of a self-renewing, ever-adaptive force working throughout Chinese cultural history. Yaji, which originally referred to an “elegant gathering” of artists and intellectuals reacting extemporaneously to one another’s works, is likewise extended to embrace all mediums and all historical periods throughout greater China. In sum, Qiu’s argument is that Chinese art develops through an unbroken succession of master-pupil relationships, consistently addressing the present and future, while constantly drawing renewed strength from ancient folk practices.

That might be an innocuous, even commendable ethos, were it not tied to a larger agenda—the strengthening of the Chinese Communist Party’s sole sovereignty over One China, legitimized in large part by championing the very cultural traditions the Party once systematically tried to destroy. It is no secret that Beijing’s leadership now actively seeks to make the People’s Republic the dominant economic, political, and cultural presence in all of Asia, and perhaps the world.

In the meantime, however, the charm offensive at the China pavilion succeeds, even if it does not engender the critical esteem that the organizers so clearly crave. One can appreciate the artists’ technical virtuosity and still have fun watching wacky folk tales enacted by leather cutouts on sticks—all without subscribing to Qiu’s state-sanctioned notions about “the DNA of Chinese civilization” and “the inexhaustible soil of folk culture,” ideas that resonate a bit too closely with the volk-ish “blood and soil” rhetoric of the West’s own darkest modern hour.