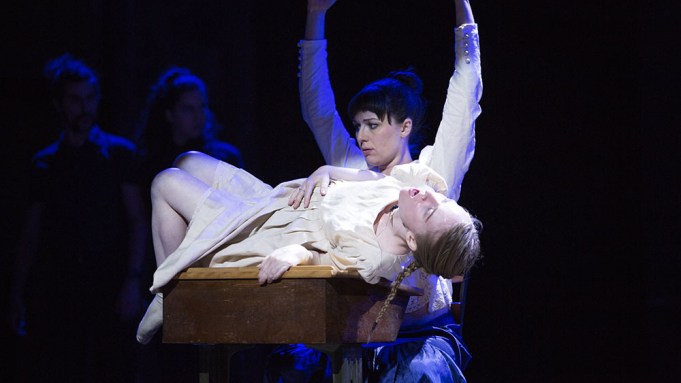 “Can I touch you?” asked a young brunette woman in a black polo shirt, taking my hand and leading me into the cavernous main space of the Knockdown Center in Maspeth, Queens. Around us, about a dozen individuals in identical attire paired up with audience members. We made small talk for a few minutes, until she broke off the conversation. “Sorry, I have to go do something for my job,” she said, as her colleagues murmured similar statements. Suddenly, the black-shirted performers were dancing in unison before us, performing a sequence of simple, controlled movements reminiscent of the choreography in early 1990s hip-hop videos. They moved mechanically, like marionettes conducted by invisible strings.

This was the introductory sequence of Authority Figure (May 20-22), an evening-length performance at the Knockdown Center directed by Monica Mirabile and Sarah Kinlaw. The event, featuring more than one hundred and fifty performers and collaborators, spread across the 50,000-square-foot former glass factory and its industrial grounds. Conceived by Mirabile and Kinlaw as “a social psychology experiment that uses choreography, sound and installation to elicit emotional response from the audience,” the performance comprised fourteen different vignettes on the themes of obedient relationships, from the familial to the pedagogical to the political. One point of departure was the Milgram experiments of the 1960s, wherein participants administered what they thought were life-threatening electrical shocks to actors when prodded by an authority figure. Another was the continued and escalating violence against racial and sexual minorities.

Like real-life power dynamics, the sequences of Authority Figure alternately depended on outward manifestations of force, more intimate forms of coercion, and internalized discipline. (Despite the psychological tension inherent in the set-up, the piece also manifested safe-space practices, with reminders that audience members could leave at any time.) Before prospective spectators could buy tickets, they were required to complete a five-item multiple-choice questionnaire describing their experiences of authority. The queries ranged from “What relationship of obedience is most familiar to you?” to “You see a police officer violently arresting someone, what do you do?” Based on their answers, participants were assigned various entry times, circulating through the installations in fifteen-minute intervals. When I spoke with Mirabile in June, she explained that people who seemed to express less empathy were assigned earlier times, with the first group spending approximately three hours total at Knockdown. The extended viewing time could be considered a test of psychological and physical endurance.

Mirabile, who studied interdisciplinary sculpture and is half of the experimental dance duo FLuCT, considers her choreography “generally aggressive, not beautiful.” She added that she aims to “force people to think about the choices they are making.” And yet, the construction of Authority Figure more closely resembled community theater than a dictatorial production. The multifaceted performance piece incorporated as many bodies and voices as were willing. Mirabile and her co-director Sarah Kinlaw, a vocal and visual artist, enlisted a handful of additional artists to contribute installations, choreography, and sound. Advanced press touted the hipness of collaborators like musicians like Devonté Hynes (Blood Orange) and Caroline Polachek (of Chairlift) and choreographers like Sigrid Lauren (Mirabile’s partner in FLuCT), Colin Self, and India Menuez. Performers, both trained and untrained, were solicited starting in October 2015 through social media, as well as via open calls on platforms like Backstage and Dance/NYC. No one was turned away, and though the directors could only offer (per the Dance/NYC ad) “full documentation and lots of good press,” they sought to make the rehearsal and performance experience one of mutual, even therapeutic, exchange. As Mirabile explained, rehearsals included conversation and consciousness-raising, in addition to movement exercises about the embodiment of authority.

The effect, however, was that of a polished psychological spectacle. I was in an audience group of about twenty people. We were led through the vignettes by a guide with the bearing of a drill sergeant. In each section we were physically outnumbered by the dancers—a majority of whom were young, white women.

After the one-on-one encounter with the polo-shirt-wearing dancers, we were led into set designed to look like an eerily empty convenience store. There, performers shopped in a zombified state before being subject to a police raid. The stage was darkened, and audience members were asked to illuminate it with the flashlights on their mobile devices. As I circled the scene, I saw a number of performers “tased” by the arresting officers. They responded with electrified movement both tortured and the erotic, resembling something of the photographs of Jean-Martin Charcot’s nineteenth-century hysteric patients at Salpetrière in Paris and twenty-first-century twerking. While the audience was guided to observe a sharply choreographed classroom power struggle and a theatrical exchange between three “mean girls,” a few dancers piled approximately fifty motionless bodies on the ground next to us.

The piles of bodies stayed with me. They have stayed with me over the past month, shifting significance as one tragedy plays out after another: the acquittal of Baltimore police officers Edward M. Nero and Caesar Goodson in the death of Freddie Gray while in police custody, the school shooting at UCLA, Brock Turner’s light sentence for rape and his victim’s response, and most recently, the June 11 massacre at Pulse Nightclub in Orlando. “We couldn’t have done this performance with the same intensity” after the Pulse shooting, Mirabile, a Florida native who works at a queer bar, admitted to me.

While the impact of Authority Figure is singular, in terms of its ambition and scale as a largely self-organized performance by emerging artists, it is connected to current cultural tendencies. Just a few days after seeing Authority Figure, I visited Jordan Wolfson’s Colored Sculpture at David Zwirner. In some ways, the installation functioned as a flipped mirror image of Authority Figure. Wolfson’s red-haired child “robot” with LCD screens for eyes was chained to a mechanical apparatus that dragged it across the floor. A booming soundtrack played snatches of “When a Man Loves a Woman” and some sadistic romantic poetry read by Wolfson. Of the poetry, critic Kevin McGarry recently wrote: “It reduces the rawness of the sculpture, which could metaphorically extend to so many types of suffering in this age of pain, to something, intentionally or not, evocative of a tedious brand of heterosexual male privilege.” Where Authority Figure multiplied the experience of archetypes of violence (against queer individuals, against people of color, against women), Wolfson’s sculpture distilled all the world’s pain into one, white, masculine form.

As we mingled in Knockdown’s bar area after Authority Figure, an artist friend brought up an entirely different reference point: the work of Vanessa Beecroft. A lightning rod for some of the most volatile debates about feminist art in the 1990s, Beecroft’s performances have combined fashion and art in a way that seemed to anticipate the way many young artists work today. The Italian artist’s early works gathered “armies” of young women, usually models, in gallery and museum settings. Clad in body-hugging designer gear, or naked, they stared dead-eyed at the audience, occasionally shifting positions and speaking to one another. Beecroft’s complicity with mainstream female beauty ideals and the media attention her work attracted unsettled many critics. In an ambivalent review of Show, Beecroft’s 1998 performance at the Guggenheim Museum, Roberta Smith wrote in the New York Times: “Ms. Beecroft’s work is so au courant in its aloof sexuality, its ambiguous borrowings from popular culture and its use of real time, real space and real flesh that it would have to be invented if it didn’t already exist (which may also mean that it is a flash in the pan, like the work of so many ‘80s art stars.)” Smith’s take also got to the heart of Beecroft’s critical potential: “In addition to bodies, ‘Show’ brought into the open the quick, surreptitious looks with which members of both sexes appraise women, exaggerating the glance to excruciating lengths.”

Authority Figure, as a performance about obedience and suffering, also benefits from its human resources of youth, beauty, and media savvy. Authority Figure’s participants, largely under thirty, understand the paradoxes of working within technologically advanced capitalism in order to carve out a space for alternative production. But while technology is important, Mirabile asserts the ultimate sense of her work is “choreopolitical,” a term coined by theorist André Lepecki: to understand how the body expresses trauma, and explore new ways to move politically. Let the bodies hit the floor, in other words, but let them also learn how to rise up.