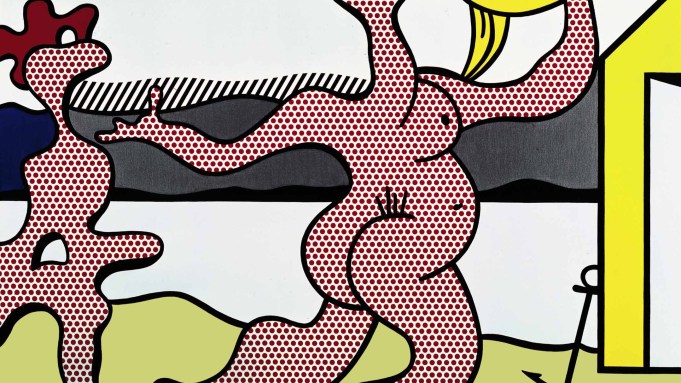 Following a relatively sedate performance at Sotheby’s, collectors sprang into action at Christie’s contemporary sale on Wednesday evening, bidding on all but five of 54 works for profits totaling $97.3 million of its $104.5 million high estimate.

The sale’s success was attributed, in part, to its stock: Christie’s amassed a formidable lot of estate property during the preceding year. Most notably, 20 paintings, drawings, and sculptures from the estate of contemporary music patron Betty Freeman, a collector whose early penchant for Abstract Expressionism grew to include painters such as David Hockney and Roy Lichtenstein. Freeman’s tastes have proven prescient: She acquired Hockney’s iconic diptych Beverly Hills Housewife (1966-1967) for $4,250 when it was first shown in 1967. Last night, it commanded the highest price of the evening, setting a world auction record for the artist at $7.9 million. Another Freeman lot (and catalogue cover image), Lichtenstein’s Frolic, (1966) cleared its $6 million high estimate at $6,018,000, paid by New York dealer Larry Gagosian. Sam Francis’s Gray (1954) also finished off in the top ten, selling for $3.6 million to Broad Art Foundation director Joanne Heyler, who bid on behalf of Eli Broad. Only one Freeman lot failed to sell; overall, the collection netted $31.6 million.

While collectors did buy, they did so with prudence. A collection of stalwart classics rounded out the rest of the top ten: Richard Diebenkorn’s Ocean Park No. 117 commanded the evening’s second highest sale at $6,578,500 (est. $6 million). Two Warhols — The Last Supper (Camel/ 57) (1986) and Gun (1981-1982) — went for $4,002,500 and $3,106,500 respectively, while Jean-Michel Basquiat’s Matar sold for $5.85 million. Perhaps driven by the previous night’s bidding war at Sotheby’s, wherein a mobile work commanded more than double its estimated price, a wall relief by perennial crowd pleaser Alexander Calder drew a final bid of $2.8 million.

[Click through the slide show above for the top lots from Christie’s Post-War and Contemporary evening sale. Note that final prices include the commission paid to Christie’s: 25 percent of the first $50,000; 20 percent of the next $50,000 to $1 million; and 12 percent of the rest. Estimates do not reflect commissions.]