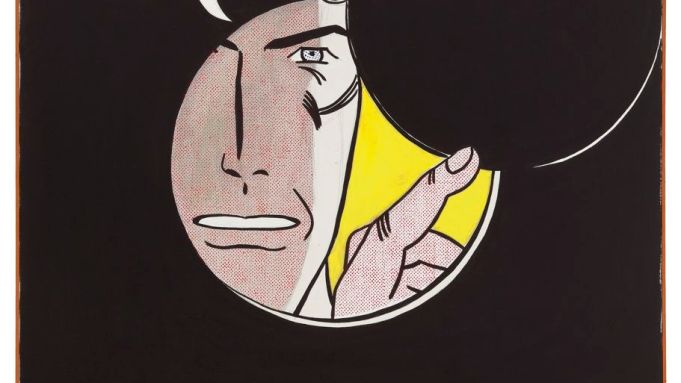 Financial jitters faded from the picture last night at Christie’s Rockefeller Center headquarters as contemporary artworks sold by software mogul Peter Norton helped propel the auction to a $247.6-million tally, with 90 percent of lots finding buyers. “It did extraordinarily well, way outside what one might have expected,” art advisor Thea Westreich told A.i.A. “To try to rationalize” the good results in this economic climate “is post-auction baloney.”

The success of the Norton property provided momentum for the remainder of the 65-lot sale. The evening’s top lot, a 1961 painting by Roy Lichtenstein, sold for $43.2 million, above a $35-million low estimate. The work was sold by Courtney Ross, widow of former Time Warner CEO Steve Ross, according to the Wall Street Journal. The 4-foot-square canvas melds a solid black background with a cartoon image of a man peering into a hole exclaiming the title of the work, “I Can See the Whole Room! . . . and There’s Nobody in it!” The piece previously sold at Christie’s in 1988 for $2.1 million at a sale of property owned by collectors Emily and Burton Tremaine.

Another highlight was Louise Bourgeois’s spindly 21-foot-wide bronze Spider (1996), which sold for $10.7 million, more than doubling the $4-million low estimate and setting an auction record for the artist. (The work is from an edition of six.) The price is among the highest prices at auction for a female artist, which currently stands at $10.9 million for Natalia Goncharova’s Les Fleurs in 2008.

Andreas Gursky’s Rhein II, a 12-foot-wide horizontal landscape, achieved a world auction record for the sale of a photograph, fetching $4.3 million. The piece was produced in 1999 in an edition of six; four reside in major museums. The previous record was held by a 1981 Cindy Sherman print that sold for $3.9 million last May.

Warhol also fared well. Six paintings were offered and all sold. The 1963 Silver Liz, depicting a glamorous Elizabeth Taylor with a splash of blue eye shadow, went for $16.3 million to jeweler Laurence Graff. The artist’s 1962 Four Campbell’s Soup Cans sold for $9.8 million to an unnamed phone bidder. Jose Mugrabi was the underbidder.

Buyers occasionally showed restraint. Francis Bacon’s 1981 Study of a Man Talking, a somber portrait of the artist’s companion John Edwards, was tagged to sell for between $12 million and $18 million. The work failed to sell. A 1971 fleshy-hued Willem de Kooning painting, estimated to sell for $8 million to $12 million, failed to draw any bids, despite the high-profile moment for the artist afforded by the current MoMA retrospective.

“Collecting art has enormous pleasure for everyone,” according to Westreich. Of the evening’s stellar results, she said, “It’s clear that those who can afford to are still enjoying those pleasures.”