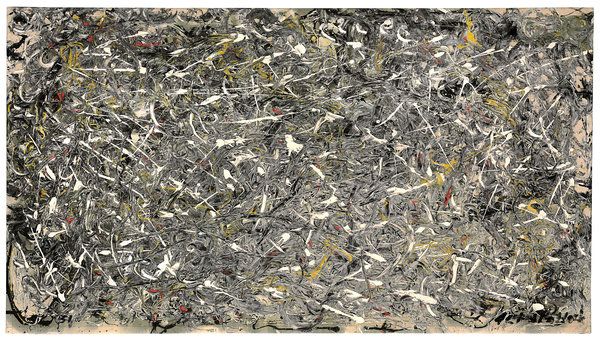 As the Dow fell for the sixth consecutive day, the world’s wealthiest rallied to spend a record $388.5 million on art at Christie’s last night. The haul made this the most successful auction of contemporary art, edging by the previous record of $384.6 million set at Christie’s in 2007.

“It was very high-quality material,” art advisor Mary Hoeveler told A.i.A., “the likes of which the market hasn’t seen in 10 years.” The caliber of the works for sale confirmed that buyers are out there for top-shelf works–as evidenced by the numerous bidders on some of the highest-priced lots–even though Christie’s Impressionist and modern auction the week before, widely thought to contain lackluster offerings, netted just $117 million.

Numerous records tumbled in the jam-packed salesroom. The crowd was studded with collectors including casino magnate Steve Wynn, accompanied by his dealer, William Acquavella, and financier Donald Marron.

Auction records were set for 12 artists, including Mark Rothko, Yves Klein, Jackson Pollock and Gerhard Richter. The $86.9 million brought by Rothko’s Orange, Red, Yellow (1961) was the highest price realized at auction by any contemporary work, exceeding the $86.3 million paid in 2008 for Francis Bacon’s 1976 Triptych (in 3 parts). An unnamed bidder completed the purchase by phone.

The sale got a big boost from the collection of Philadelphia menswear magnate David Pincus, including Rothko, Pollock, de Kooning, Still and Kiefer, which netted $174.9 million, becoming the most expensive collection of postwar and contemporary art to be sold at auction.

Pincus’s wife Geraldine is quoted in the catalogue noting that the couple took out a loan in 1967 to buy the Rothko, with its feathery brushwork and radiant, floating rectangles, from Marlborough Gallery.

Soaring past its $35-45 million estimate, Orange, Red, Yellow comes to market five years after the artist’s White Center (Yellow, Pink and Lavender on Rose), a 1950 canvas, was sold by David Rockefeller at Sotheby’s for a then-record $72.8 million at the height of the art-market boom, which was uncannily recalled last night.

Another Pincus highlight was Number 28, 1951, a Jackson Pollock abstraction in gray, black and white with abundant impasto. The work smashed the artist’s previous record of $11.7 million, set in 2004, to sell at $23 million. Just two bidders competed for the work.

Not only American artists sold well. European tastes were gratified by a record-setting painting by Yves Klein. Ringing up at $36.5 million was the nearly 10-foot-wide painting FC1 (Fire Color 1), 1962, coming from a private Swiss collection. The work shows the figures of two women emerging, perhaps dancing, from a field of blue and gold. Its surface is scorched in places. It beat the artist’s previous record price at auction of $23.5 million, set in 2008.

Exceeding the previous high for Gerhard Richter was the artist’s nearly 8-foot-square squeegee painting Abstraktes Bild (798-3), 1993, which brought $21.8 million. It had been off the market since it was purchased at the Anthony d’Offay Gallery in 1994. Its predominantly hot red palette offsets its emotional coolness.

Records were set twice for Alexander Calder during the two-hour auction.

Lily of Force (1945), a standing mobile, brought $18.6 million, surpassing the record for Calder set earlier in the evening by Snow Flurry (1948), which brought $10.4 million. This beat the previous auction record of $6.4 million, set in 2010. Snow Flurry was fresh from the glass-walled, modernist New Canaan estate of architect/designer Eliot Noyes, where it had been since the ‘50s.

“These results are very welcome, but it’s not a surprise,” Alexander S. C. Rower, president of the Calder Foundation, told A.i.A. “It represents the closing of a gap between the public and the private markets.” He pointed out that the record for a private Calder sale, set about five years ago, is $35 million. “Hopefully,” he added, “it was bought by a museum. That’s where it belongs.”

“Going into this sale, the question was whether the market could absorb this much material at this level,” Hoeveler told A.i.A. “The answer was resoundingly yes.”

The spring contemporary auctions continue this week in New York, with Sotheby’s offering works from the ‘60s and ‘70s by Warhol, Lichtenstein and Bacon, and Phillips de Pury’s sale on Thursday.