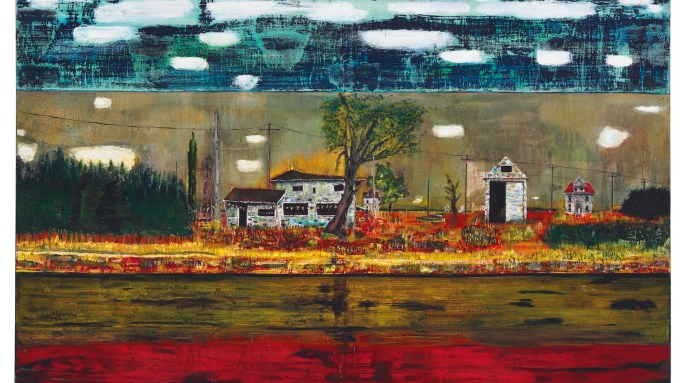 Setting auction records for a dozen artists, Christie’s New York realized $134.6 million on a contemporary art sale that was estimated to bring up to $124 million. All but one of the 35 works on offer sold during the hourlong auction.

“The solidity was what shocked me,” said Miami collector Don Rubell after the auction. “There were no ups and downs.”

“It was very energetic, very strong, and very selective,” New York dealer Dominique Lévy told A.i.A. “The only lot that got carried away was a masterpiece—the Kippenberger. Bids were very well thought through.”

The only work that did not sell was an untitled Cindy Sherman photograph. No surprise there, said Todd Levin, director of New York’s Levin Art Group, who told A.i.A. that the work “was so badly burned on the secondary market [previously offered unsuccessfully for sale], it was crispy.”

The sale was organized by Swiss-born Christie’s specialist Loic Gouzer, who, a year ago, organized the charity auction “The Eleventh Hour,” with actor Leonardo DiCaprio, which raised some $38.8 million on an estimate of $15 million. That sale set 13 auction records, for artists including Carol Bove, Mark Grotjahn, Elizabeth Peyton and Sterling Ruby.

In the wake of that bonanza, Gouzer organized tonight’s sale, “If I Live I’ll See You Tuesday.” (The title is based on a joke painting by Richard Prince included in the sale, which reads “Jewish man talking to his friend: If I live I’ll see you Tuesday. If I don’t I’ll see you Wednesday.”) A press release touted the sale as showing the “gritty, underbelly-esque” side of contemporary art. Christie’s promoted the auction with a video of a pro skateboarder rolling past works on offer in the auction house’s storage spaces, high-fiving Christie’s staffers. Before the sale catalogue was released, Gouzer Instagrammed works on offer. DiCaprio ascended to a skybox before the sale.

Leading the night at $18.6 million was an untitled 8-foot-wide Kippenberger self-portrait on canvas. Based on a famously virile photo of an 81-year-old Picasso in his underwear, the painting shows a portly male figure in comically large white briefs, his face obscured by a blue balloon. Estimated to fetch up to $12 million, the work nearly tripled the artist’s record of $6.4 million, set last year at Sotheby’s New York.

Richard Prince had a strong night, with his canvas Nurse of Greenmeadow (2002), tagged up to $9 million, bringing $8.6 million, brushing by his previous $8.5 million record, set in 2008 at Sotheby’s London.

Also setting a record for Prince, this time for a photograph, was the notorious 1983 Spiritual America, which appropriated photographer Gary Gross’s controversial image of a naked 10-year-old Brooke Shields. The title is lifted from Alfred Stieglitz’s 1923 photograph of a gelded horse’s hindquarters. It brought $3.97 million, surpassing his previous high for a photo of $3.4 million, set at Sotheby’s New York in 2007.

Despite rumors that the artist hoped to sabotage the sale, Guyton set a record at $3.5 million for an 2005 canvas, Untitled (Fire, Red/Black U), showing two letter “U”s against a black background marked by red flames. His previous auction high was just $2.4 million, set at Christie’s New York last year.

“The estimates were not low,” said New York dealer Phillippe Ségalot. Referring to an atmosphere that was lively but not overly exuberant, he said, “The action was not crazy, because the estimates were already there.”

Amid the general tenor of celebration, Levin sounded a cautionary note.

“That was a bull market sale,” Levin told A.i.A. “But if you run with the bulls, when the market changes direction, you’re going to get rather badly gored.”

Christie’s is back in action tomorrow night, with a contemporary art sale estimated to bring half a billion dollars. Sotheby’s follows on Wednesday with an auction estimated at up to $450 million. The spring auction season ends with Phillips New York’s sale on Thursday, estimated to bring up to $185 million.

The 5 Best Instant Cameras of 2022, Tested and Reviewed by a Photographer