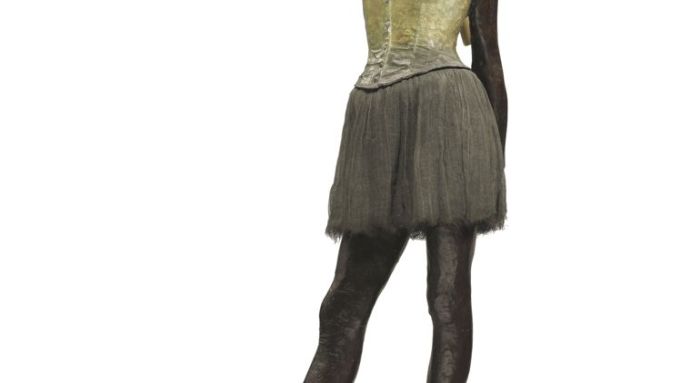 A rocky sale last night at Christie’s tallied just $140.8 million, well below the projected $300-million high estimate. Collectors rejected bullish estimates as nearly 40 percent of lots failed to sell. Amid global economic jitters, the Impressionist and Modern art auction was the first of a series of sales in New York taking place this week and next.  Major works by Degas, Picasso, Matisse and Giacometti tanked.

“The market seems more sensitive than we had thought,” said Thomas Seydoux, international head of the Impressionist and modern art department, during a post-sale press conference. Of 82 lots on offer, just 51 sold.

Among the biggest flops was the evening’s cover lot, Edgar Degas’s Petite Danseuse de Quatorze Ans, estimated to fetch as much as $35 million.  The bronze tutu-wearing teen attracted significant presale interest, according to Conor Jordan, head of Christie’s New York Impressionist and modern art department.  The anonymous seller was Turkish banker and Sotheby’s advisory board member Halit Cingillioglu, according to two dealers. The seller acquired the work for a then record $11.6 million at Sotheby’s in London in 2000. Dealers said the estimate this time around was far too high.

It was also a lousy night for Picasso. Out of 11 on offer, just four sold. The Picasso tally achieved just $13.4 million, out of a projected $44.5-million low estimate. A 1935 painting of a snoozing Marie-Thérèse Walter, Femme Endormie, estimated to sell for up to $18 million, failed to find a buyer.  The 1939 Tête de Femme au Chapeau Mauve, depicting Dora Maar, also estimated to sell for up to $18 million, went unsold. Dealer Larry Gagosian, who has recently mounted a series of Picasso shows, was the underbidder on both.

Picasso works on paper were among the evening’s strong performers. La Femme Qui Pleure, I, a 1937 etching, sold for $5.1 million, double the $2.5-million presale high estimate. “It did exactly what I had predicted,” said private dealer Emmanuel Benador. “It’s an iconic image. It’s a very small edition of only 15 from the most complete and final version of the print.” The print was made at the same time Picasso was working on his famed Guernica mural, according to Christie’s, and his series of weeping women were connected to his depictions of suffering and war.

Picasso wasn’t the only modern master having a bad night. A 1956 gray Giacometti painting, Homme, estimated to go for more than $7 million, failed to sell. The consignor was collector Donald Bryant, Jr., according to a dealer.

A cluster of Surrealist material showed strength. The priciest lot was Max Ernst’s 1941 painting The Stolen Mirror, which more than doubled the $6-million high estimate, selling to an unnamed European private collector for $16.3 million. The price was more than triple the artist’s previous auction record. The fantastical landscape is filled with touches of “decalcomania,” a technique in which paper is applied to wet paint and peeled off for a marbled effect. The work also features a pair of nude nymphs thought to be inspired by Ernst’s lover, the Surrealist painter Leonora Carrington. A cloudy sky dominates the top half of the painting, hovering over a magical paradise inhabited by long-haired women and a menagerie of strange animals.

A spare salmon-hued René Magritte also fared well. Les Vacances de Hegel, a mysterious 1958 oil painting of a glass of water perched on a black umbrella, sold to an unnamed American collector for $10.2 million. “It’s a big price, but it has appeal for a contemporary collector,” said Emmanuel Di Donna, of Blain/Di Donna, a new Madison Avenue gallery. “There’s something very graphic and provoking about this kind of imagery. It’s not about pretty, it’s about the brain and thinking.”

Museums were among the evening’s sellers. MoMA’s 1941 Paul Delvaux Les Mains, featuring nude women gazing at their hands, sold for $6.6 million, just above the $6- million low estimate. The buyer was an unnamed U.S. collector bidding by phone. The Art Institute of Chicago sold Barbara Hepworth’s 1961-62 abstract white alabaster Two Forms Pierced. Estimated to sell for more than $300,000, the work made $650,500.

Another bright spot was Constantin Brancusi’s Le Premier Cri, a 10-inch-long polished bronze head conceived in 1917. Estimated to sell for up to $10 million, the head sold to a European phone bidder for $14.9 million. Gagosian was the underbidder.

[Final sales prices include Christie’s buyer fees. Estimates do not.]

“Tonight will do better,” Benador predicted. “I’m sure Sotheby’s is calling every single owner to lower the reserves.”

These Are the Best Mattresses to Buy on Amazon, Based on Customer Reviews