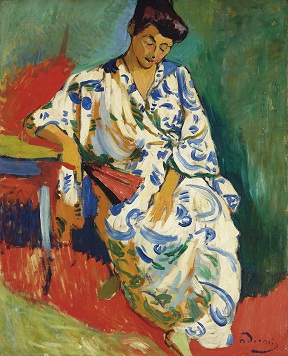 Christie’s New York wrapped up the first week of major evening auctions with a $158.5-million sale of Impressionist and modern art. Even examples of middling quality inspired eager bidding. Fully 47 of the 50 works on offer found buyers over the 75-minute auction, with bidders competing, mostly by phone via Christie’s staffers, from more than 30 countries.

“Even without a lot of leading lots, there are still really enthusiastic buyers looking for good Impressionist and modern art,” dealer Frances Beatty, of New York’s Richard L. Feigen Gallery, told A.i.A. by phone after the sale.

“Though there were a few very nice things for sale this week, it’s getting more and more difficult to find great [Impressionist and modern] material,” New York dealer Daniella Luxembourg told A.i.A. at the auction house.

Last night’s sale was expected to bring between $131 and $190 million, not counting commissions. The house’s May 2012 sale of Impressionist and modern art garnered just $117 million on 31 lots.

The evening’s top price, $18 million, a record for the artist, was fetched by Chaim Soutine’s Le petit pâtissier (ca. 1927), which has been in an unnamed European collection since 1977 and was estimated at $16-22 million. In bidding lasting less than a minute, the work squeaked past Soutine’s previous auction record of $17.2 million, established at Sotheby’s London in 2007.

Coming from the same European private collection was Marc Chagall’s Les trois acrobats (1926), which brought $13 million from an unidentified phone bidder, sailing past its high estimate of $9 million in just over a minute.

Egon Schiele’s Selbstbildnis mit Modell (Fragment), a 1913 oil on canvas measuring a distinctive 27¾ by 95 inches, brought $11.3 million from an unidentified man in the sales room in what was a relative bidding marathon for the evening, lasting over three minutes. The work was on offer from New York’s Neue Galerie.

One of the evening’s casualties was André Derain’s Madame Matisse au kimono (1905), which was expected to bring as much as $20 million but failed to find a single bidder.

“What you learned from this sale is that there is money in reserve,” Beatty told A.i.A. “If they had had more important things to sell, there would have been even greater competition. Because there are people waiting in the wings who have money and are ready to pounce.”

The auctions continue next week, with a sale of postwar and contemporary art at Sotheby’s on May 14 that’s expected to bring in excess of $280 million, and at Christie’s on May 15 that is estimated to fetch in the region of $300 million. Finally, on May 16, Phillips expects to ring up as much as $110 million at its contemporary art auction.