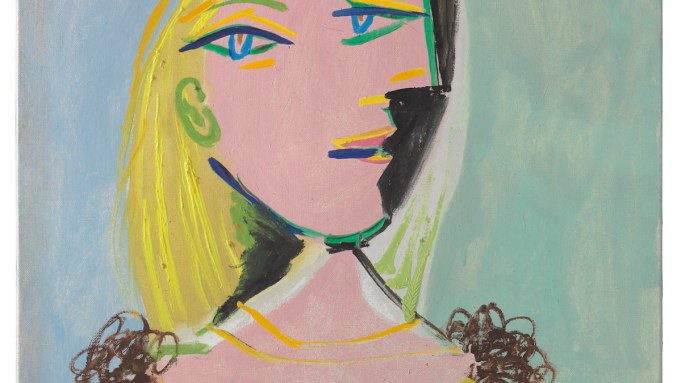 Despite the presence of big names like Picasso and van Gogh, and notwithstanding a record set for an Alberto Giacometti oil, Christie’s New York got the fall auction season off to a lackluster start last night. The $144.3 million sale total, on 46 lots, fell short of the house’s $188-million low estimate. Twenty-four percent of works failed to find buyers. The same sale last year fetched $204.8 million, with 30 percent of works failing to sell.

“It was a bit patchy,” New York dealer Nicholas Maclean, of gallery Eykyn Maclean, said to A.i.A. on his way out of the crowded sales room. “It’s tough to find good material.”

The evening’s top sale was Giacometti’s Diego in Scotch Plaid Shirt (1954), a 31-inch-high oil painting of the artist’s brother that sold for $32.6 million to an anonymous buyer. Despite selling near the low end of its $30 million to $50 million estimate, it set an auction record for an oil on canvas by the artist.

Wassily Kandinsky’s oil-on-canvas abstraction Black and Violet (1923) was the second-best seller, sailing past its $7.5 million high estimate to go for $12.6 million to a foreign dealer.

Picasso’s Woman in an Orange Beret and Fur Collar, a 1937 oil portrait of the Spaniard’s young lover, Marie-Thérèse Walter, sold for $12.1 million. It squeaked past its high estimate to come in as the number three sale of the evening.

Two high-priced items failed to find buyers, sending a murmur through the sales room. Despite its radiant blue palette and the sinuous S-curve of the sitter’s pose, Amedeo Modigliani’s Monsieur Baranowski (1918) failed to find bidders, even though it was estimated to sell for $25 million to $35 million. “It’s always tougher to find buyers for male portraits,” Maclean told A.i.A.

A 6-foot-wide Picasso, Painter and his Model in a Landscape (1963), estimated to bring up to $35 million, also failed to elicit a single bid, though auctioneer Andreas Rumbler allowed nearly a minute to go by while the work was on the block. Also failing to launch were works by Egon Schiele, Natalia Goncharova, Giacomo Balla, Picasso, Léger, Munch, Dalí and Magritte.

As usual, much of the bidding was by Christie’s specialists working with prospective buyers by phone. Rebecca Wei, Christie’s managing director for Asia, and Xin Li, deputy chairman of Asian business development, were especially active.

One of the night’s victors was a tiny van Gogh pen and ink on paper, Vincent’s House at Arles (The Yellow House), 1888, a 5 1/4-by-8 1/8-inch drawing that inspired a several-minute bidding war before selling for $5.5 million, well above its high estimate of $3.5 million. It was the evening’s eighth-highest price. Rumbler joked, during a pause in the bidding, “I wonder if [the bidder] knows how small it is.”

“Buyers are fueled by competition—hence the wild price for the van Gogh—and the lack of it deadens their appetite,” New York dealer Frances Beatty Adler, of Richard L. Feigen & Co., told A.i.A. via e-mail after the sale.

On Monday evening, Christie’s had staged an auction of works from the holdings of legendary dealer Jan Krugier, at which 155 works fetched just $92 million, considerably less than its $147.6 million low estimate. Sotheby’s is up next, selling Impressionist and modern works at its sale tonight, expected to tally as much as $313.9 million.

“The material on offer was not that great,” Citi Private Bank Art Advisory’s Suzanne Gyorgy told A.i.A. on her way out of the sales room last night, “and the estimates were high. There were lots of Asian bidders buying Chagalls. Xin Li certainly had a very busy night.”

Gyorgy expects much more active bidding next week, when postwar and contemporary works are up for sale. “I don’t know if tonight’s results are going to affect next week, when there’s a completely different set of buyers,” she said.

She added, “Next week will tell all.”