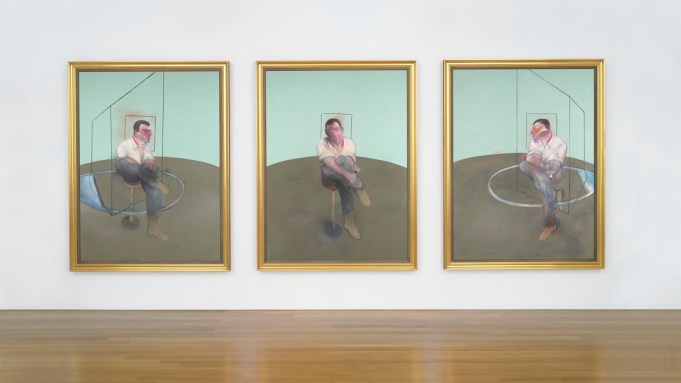 Led by an $84.2-million Barnett Newman, Christie’s New York pulled off another record auction last night, selling $744.9 million in contemporary art over a two-and-a-half-hour sale in a jam-packed salesroom. The tally was the highest auction total ever, beating the house’s previous high of $691 million, set in November.

With 72 works, the sale was expected to bring in the region of half a billion dollars, the same amount the house sold last May—when it achieved what was at the time the highest total in auction history. Only four works failed to sell. A third of buyers were new to Christie’s, according to the house.

“It doesn’t get better than that,” New York dealer Alberto Mugrabi told A.i.A. after the sale.

“Amazing,” said New York dealer Philippe Ségalot. “A fantastic sale. The best sale ever. Amazing. Amazing. That’s the only word I can say.”

“We are riding the crest of a wave,” New York dealer Nicholas Maclean told A.i.A. on his way out of the salesroom partway through the evening.

The house was fresh off a successful sale of contemporary art the previous night, organized by in-house specialist Loic Gouzer and focusing on younger artists and buyers. Estimated at up to $124 million, that sale achieved $134.6 million and set records for a dozen artists, from Joe Bradley to Thomas Schütte.

Last night’s top lot, estimated in the region of $50 million, was Newman’s Black Fire I (1961), a 9½-foot-high work in black pigment on canvas. It nearly doubled his previous auction high of $43.8 million, fetched by Onement VI (1953) at Sotheby’s New York in May 2013. Black Fire I had been on loan to the Philadelphia Museum of Art for nearly 30 years, and went to an anonymous phone bidder after a five-minute contest.

Fetching $80.8 million from an Asian bidder via Christie’s Hong Kong-based specialist Xin Li, after less than two minutes of bidding, was the evening’s second-priciest lot, Francis Bacon’s Three Studies for a Portrait of John Edwards (1984). The artist’s Three Studies of Lucian Freud (1969) rang up at $142.4 million at Christie’s in November 2013, becoming the most expensive work of art sold at auction. The Edwards work is “one of the portraits that I’ve done that has really rather worked,” Bacon said, according to the catalogue. The three-canvas painting shows an East London bar manager who was the painter’s closest companion in his last years. It went for just $4.5 million at Christie’s London in 2001. The New York Times has reported that the piece was sold by the Taiwanese entrepreneur and collector Pierre Chen.

Several of the evening’s top lots are bound for new homes in Asia. Xin Li, at times wielding three phones, also conveyed the winning bids on four other works in the sale’s top 10: a $66.2-million Rothko abstraction, a $33.8-million Koons sculpture, a $29.3-million Richter abstraction, and the record-setting Calder mobile, which dangled above bidders’ heads in the Rockefeller Center salesroom.

“And Asia is not just China,” Christie’s Brett Gorvy told A.i.A. after the sale. “Tonight we had clients from Malaysia, Hong Kong-based Taiwanese, and Indonesian bidders participating at the highest levels.”

Race Riot, a 5½-foot-wide four-panel work in acrylic and ink on linen, repeats in red, white and blue an image published in Life magazine showing police dogs lunging at a black man during a 1963 demonstration in Birmingham, Ala. The same work brought $627,000 at Christie’s New York in November 1992.

“We love Warhol as the master of Pop, with his Marilyns and Campbell’s Soup cans, but Warhol was really about the underbelly of American society,” Christie’s specialist Sara Friedlander told A.i.A. before the sale. “Nothing is more illustrative of that than Race Riot.”

Wool’s 8-foot-high enamel-on-aluminum painting, offered by an unnamed European collection, reads “If you can’t take a joke you can get the fuck out of my house” in the artist’s trademark black block letters. The work’s high estimate was $30 million. Wool had a 2013-14 solo show at New York’s Guggenheim Museum.

“This is not a frothy market,” Gorvy said at a post-sale press conference. “We are in the middle of a fantastic moment, rising with great foundation stones.”

“The speculators have finally succeeded in commodifying art,” Frances Beatty, of Richard Feigen & Co., told A.i.A. after the sale, “which is a triumph for them and a disaster for the artists and for the culture, because it has made the speculators the leaders rather than the artists.”

The postwar and contemporary art sales continue tonight at Sotheby’s New York, which is estimated to ring up as much as $450 million, and Phillips New York Thursday, estimated to tally up to $185 million.