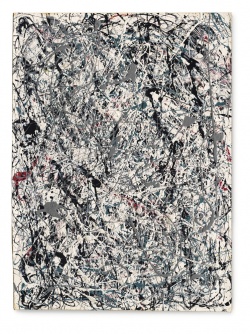 Before the total was announced, on the sidewalk outside Rockefeller Center, even high rollers like New York-based dealer Philippe Segalot were stunned. “That was real fireworks!” he told A.i.A. “Crazy! I’m still digesting it.”

Nearby, Miami-based collector Don Rubell showed A.i.A. his notes on the distribution of bids, and said, “More than 55 percent of pieces went for prices above their high estimates.” He added, “That’s a scary number.” He and art advisor Todd Levin wondered, “Was that a record sale?”

Leaving the auction partway through, New York dealer Daniella Luxembourg told A.i.A., “This is a huge night. A Basquiat sold for more than the Barnett Newman painting last night, which is a rarer painting. It shows that what people want is recognizable assets. This comes along with globalization. Whether you live in Hong Kong or Azerbaijan, certain people will recognize these things.”

It was the kind of night that led longtime professionals to wax nostalgic.

“When I got into this business,” auctioneer Jussi Pylkkänen said at a post-sale press conference, “a picture selling for $20 million was an incredible rarity. Now it’s hard to even set prices for some of these works.”

Referring to the $50-million hammer price achieved by a Lichtenstein work, Citi Art Advisory’s Suzanne Gyorgy wondered, speaking to A.i.A. by phone after the sale, “What can you buy for $50 million? A Gulfstream jet, a new luxury apartment on Park Avenue or a house in the Hamptons.”

The evening’s biggest sale was $58.4 million for Pollock’s Number 19, 1948, a record for the artist. The drip abstraction in white, black and gray was expected to fetch as much as $35 million. Despite measuring just 30 7/8 by 22 5/8 inches, the painting inspired 15 bidders, three of them slugging it out past the $40 million mark. Christie’s president Doug Woodham pointed out at the press conference that the same work had sold in 1993 at Christie’s for $2.3 million. Pollock’s previous record was $40.4 million, set in November 2012 at Sotheby’s.

“Though moderate in scale, this is one of the last great Pollock drip paintings available in private hands,” said New York consultant Todd Levin, director of the Levin Art Group, talking to A.i.A. after the sale. “Since his 1947 canvas Lucifer was donated to Stanford by Harry and Mary Margaret Anderson in 2011, the desirable Pollock paintings left in private hands are very, very few in number.”

Lichtenstein’s Woman with a Flowered Hat (1963), in Magna on canvas, came in second at $56.1 million. Department chair Brett Gorvy, taking bids via phone, engaged with a determined man in the front row—English jeweler Laurence Graff—trading bids in half-million-dollar increments in a five-and-a-half-minute battle. New York art dealer Tony Shafrazi, seated nearby, at one point called out to his neighbor, “You can’t let him have it!” Lichtenstein’s previous high was $44.9 million, achieved at Sotheby’s in May 2012.

Basquiat’s Dustheads (1982) smashed the artist’s previous record of $26.4 million, set at Christie’s in November, selling for $48.8 million to become the night’s number-three sale. At 6 by 7 feet, the intensely worked painting depicts two manic-looking figures against a black ground.

Guston’s To Fellini, a large abstraction from 1958, set a record for the artist at $25.9 million, more than doubling the previous high of $10.2 million, achieved at Sotheby’s in November 2008.

“That was an impressive victory for an artist everyone knows to be historically important but who has been undervalued in the market context,” said Levin.

Among the evening’s few failures was a large Clyfford Still abstraction, PH-1 (1953), which was estimated at $15-20 million but generated no interest.

A large Francis Bacon painting, Study for Portrait, which was estimated at $18-25 million, was withdrawn by the seller at the last minute after a Bacon canvas with a high estimate of $40 million failed to generate any bids at Sotheby’s the night before.

Pressed on whether the record sale represents a bubble, or the top of the market, dealers and advisors were cautious.

“It’s true that nothing can go up forever,” Gyorgy said, “but the people paying these prices aren’t speculating. They’re not going to flip these assets in five years. Also, the artists who made such great sales tonight have been through ups and downs, so the sale feels solid. It’s tried and true material.”

New York dealer Frances Beatty Adler, of Richard L. Feigen Gallery, told A.i.A. by phone after the sale, “The good things will get more expensive. They always have. This is the top for some things, but it’s just a stop on the way up for the best.”