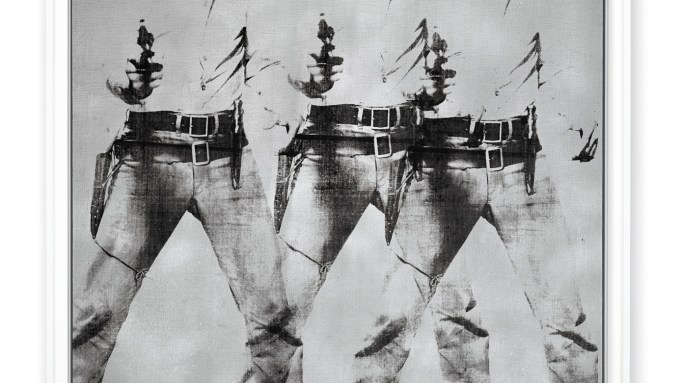 As bidding hit $62 million on a blackboard-like Cy Twombly canvas at Christie’s New York on Wednesday night, the normally hushed atmosphere was disrupted. Heads turned as an auction-goer cried out, “Whoa!” The painting would go on to sell for $69.6 million to an anonymous phone bidder, setting an auction record for the artist after a five-and-a-half-minute contest.

The lively two-hour-and-fifteen-minute sale tallied $853 million, the highest total for an auction in any category. Along the way, records were achieved for 11 artists.

The total far exceeded the $745 million racked up by the same auction house in May, which was, at the time, the highest total for any auction.

It was a night for shopping by the mega-wealthy: Three works Wednesday night went for upward of $50 million, 11 people spent more than $20 million and 23 pieces went for more than $10 million.

The sale followed a $344-million sale at Sotheby’s the previous night, led by a $45-million Rothko.

The night’s top seller at $82 million was Andy Warhol’s Triple Elvis [Ferus Type], 1963, showing the movie star in triplicate, pointing a gun at the viewer, from a publicity photo for the Western Flaming Star. Estimated at up to $60 million, the 7-foot-tall silkscreened-and-painted work had been off the market for 37 years in a casino outside Aachen, Germany. The winning bid came via phone from an unnamed buyer.

Auction houses generally follow a pricey offering with some lower-estimated works to allow for some down time, but not in this case. Offered back-to-back with Elvis was a Warhol depicting Marlon Brando, Four Marlons (1966), bearing the same $60-million presale estimate and coming from the same German casino. It shows the star in a biker jacket and leaning on his motorcycle from the 1953 film The Wild One. Brando’s character, when asked in the movie what he was rebelling against, famously replied, “What’ve you got?” The nearly 7-foot-tall silkscreen brought $70 million, the night’s second-highest price, from an anonymous buyer.

“The two Warhols enhanced each other,” New York dealer Dominique Lévy said. “It was fantastic.”

Christie’s “holds a financial interest” in both works, according to the catalogue.

Placing third for the evening was the 6-foot-wide, untitled Twombly canvas from 1970, covered in house paint and wax crayon and resembling chalk scribbles on a blackboard. Its $70-million price more than tripled the artist’s previous auction high of $22 million, set at Sotheby’s New York a year ago. It had been estimated at up to $55 million. Wednesday night’s seller bought it directly from the artist, and it hadn’t been exhibited in 20 years.

The sale included four Christopher Wool paintings that fetched a total of $31 million, on the heels of a Guggenheim Museum retrospective. Luhring, the artist’s dealer, pointed out that “they’re at a new price level, and everyone wants in.”

The sale confirmed that at the highest levels, the art market is still a man’s game: of the 80 lots, only six were by women. All the same, three of the records set were for works by female artists.

Nearly half the works in the sale were guaranteed to sell, either by the house or by third parties. Complicated financing deals played a part in the evening’s big-ticket sales.

“A lot of sellers are not willing to part with their works until they are sure they have a buyer,” New York dealer Christophe van de Weghe told A.i.A. after the sale. “But if there’s a hiccup in the market, a lot of people are going to get burned. The auction houses are playing a very dangerous game with these guarantees.”

“Guarantees are part of the business now,” dealer Jeffrey Deitch told A.i.A. “And as far as Christie’s, they know what they’re doing.”

The New York fall contemporary art auctions conclude with a sale Thursday night at Phillips, estimated to bring up to $68 million, with a Robert Ryman priced at up to $7 million.