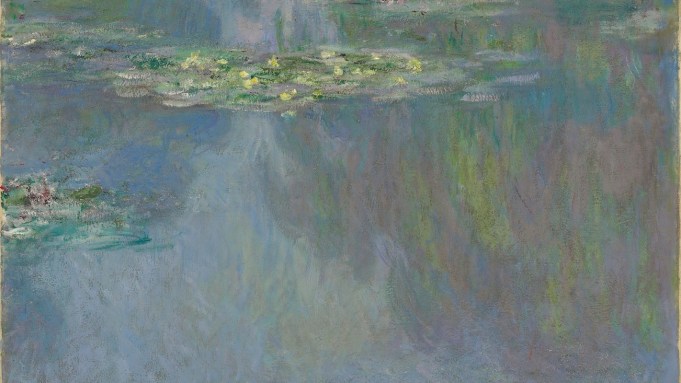 Christie’s New York launched the spring auction season last night with a robust sale of $285.9 million, led by Monet, Picasso and Modigliani, despite a palpable lack of excitement in the salesroom. The Impressionist and modern art auction had been estimated at between $245 and $360 million. The house sold 47 of 53 works over the 90-minute sale for a strong sell-through rate of 89 percent. Last year’s auction of similar material totaled $158.5 million.

“It was a solid sale,” New York dealer Nicholas Maclean, of gallery Eykyn Maclean, told A.i.A. at the auction house. “There was no frivolity. There were very good paintings, though not masterpieces that were going to fly.”

“Slightly anemic,” said Andrea Crane, New York private dealer and consultant, after the sale. “I was very surprised that the Monet Nymphéas did not go higher, and surprised that the Picasso portrait of Dora Maar did not fare better.”

Monet’s 1907 Nymphéas was the evening’s top lot, ringing up at $27 million after just 90 seconds of bidding. The price, paid by a private Asian buyer bidding by phone via Christie’s specialist Elaine Holt, was just above the painting’s low estimate of $25 million. Depicting the surface of the artist’s lily pond at Giverny, the canvas came from the estate of famous recluse and heiress Huguette Clark, who lived in a New York hospital room for her last 20 years despite good health, leaving her numerous posh residences uninhabited.

“You hear so much about Chinese buyers who love Monet’s water lily paintings,” Citi Art Advisory’s Suzanne Gyorgy said after the sale, wondering where those buyers might have been last night.

“It’s difficult to forecast exactly what bidders will do on the night” of the sale, head of department Brooke Lampley conceded at the post-sale press conference, where Christie’s CEO Doug Woodham touted nine lots that sold for north of $10 million.

But Woodham’s statistics did little to dispel the impression of listlessness in the Rockefeller Center salesroom. Picasso’s Portrait of a Woman (Dora Maar), 1942, brought just one bid to sell at $22.6 million, shy of its low estimate of $25 million. The Baer Faxt reports that the buyer was Paul Gray of Chicago’s Richard Gray Gallery.

Even estate material with good provenance failed to dazzle. Nine works from German collectors Viktor and Marianne Langen, including Kandinsky, Picasso, Braque and Léger, totaled $79.8 million against an estimate of $73 million to $105 million. Eight works from the estate of Seagram magnate Edgar M. Bronfman, among them Picasso, Degas and Matisse, brought $21 million, shy of the group’s presale estimate of $22 million to $34 million.

The evening did have some hotly contested lots.

Amedeo Modigliani’s Seated Red-Haired Young Man, a 1919 canvas, inspired a six-minute bidding war, the evening’s longest contest. It surged past its high estimate of $12 million to ring up at $17.6 million, making it the evening’s third-priciest lot. The buyer was an unnamed American private client.

Also inspiring lively bidding was a set of 19 silver repoussé plates by Picasso from 1956. After five minutes, the set more than doubled its high estimate to sell for $3.5 million to a buyer bidding over the phone via Christie’s specialist Conor Jordan.

The auctions continue tonight with a Sotheby’s sale that is forecast to bring in as much as $321 million. But the Impressionist and modern sales fail to light the same fire as is expected at next week’s postwar and contemporary art auctions, at Christie’s May 13, Sotheby’s May 14 and Phillips May 15.

“Next week will be a very different mood,” Maclean said.

“Perhaps people are holding out for next week,” observed Crane.